by Rob Williams on December 29, 2008 in Processors

Need to upgrade or build a brand-new PC, but are on a very limited budget? If you don’t mind making some small sacrifices, Intel’s Wolfdale-based Pentium Dual-Core E5200 is worthy of serious consideration. Despite retailing for only $80, it offers solid performance and some incredible overclocking headroom.

For the sake of CPU stress-testing, we use IntelBurnTest, for reasons I’ve laid out in a recent forum thread. Compared to other popular CPU stress-testers, IBT’s tests are far more gruelling, and proof of that is seen by the fact that it manages to heat the CPU up to 20°C hotter than competing applications, like SP2004. Generally, if the CPU survives the first half-hour of this stress, there’s a good chance that it’s mostly stable, but I strive for a 12 hour stress as long as time permits.

When sitting down with a new high-end processor, such as Intel’s i7-965 Extreme Edition, there’s usually not too much surprise during an overclocking run. It’s high-end… and that normally leads to the belief that impressive overclocks are sure to be possible. With a budget chip, though, such as this one, it’s hard to know beforehand what to expect. It’s an $80 CPU for a reason, after all, so it can’t be that overclockable. Or can it?

It might be $80, but the E5200 is still a Wolfdale chip, and based on Intel’s 45nm process. Even without overclocking, it’s a good performer, as we’ve seen. But there’s one simple factor here that assured me before hand that overclocking was going to be a ton of fun: the 12.5x multiplier. Because this is an 800MHz FSB processor, Intel had no choice but to include a high multiplier, and thanks to that, the ability to hit huge overclocks is definitely possible. It’s a lot more difficult to achieve a high overclock if the CPU is limited to a 7 or even 8x multiplier, but 12.5x? Intel is pretty-much asking us to overclock the life out of this thing.

That, I did. Because I had the E7200 installed prior to this one, I still had a 266MHz FSB setting applied, and because the multiplier here was 12.5x, it boot into Windows as 3.32GHz. When I checked CPU-Z out, I was impressed, because the computer felt 100% stable. Because of that, I set out to make that the first goal for a stable overclock. Since voltages were all left alone (1.30v CPU), I went straight to stressing, and not surprisingly, the chip was incredibly stable as you can see below. 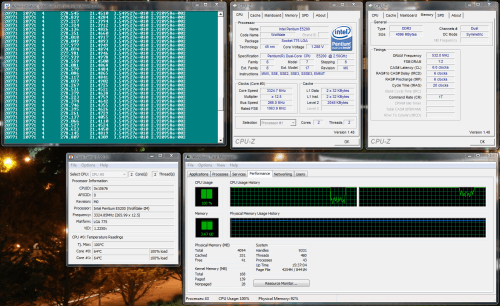 You read that right. The chip is so stable at stock voltages, that it soared through 15 hours of IntelBurnTest unscathed. Gaming was no different, either, so I’m very confident that this overclock will be possible by anyone, on most any motherboard (as long as it’s not ultra-budget).

One thing I found out quick, though, was that the FSB was a huge limiter here. I was naive enough to believe that 333MHz FSB would be fine, but I was wrong. After much tweaking, I found 300MHz FSB to be the max stable for this chip, although it might be able to go higher with a lot more tweaking, but I didn’t find that necessary. Even at 300MHz, that gives us a 3.75GHz overclock, and guess what? Stable! 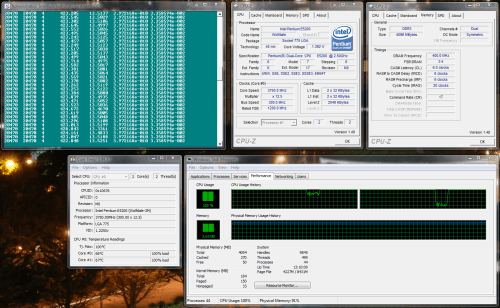 To hit that, the CPU voltage had to be increased to 1.40v, which for the most part, is still reasonable. It is beyond Intel’s spec, though, so bear that in mind. I’d be confident in leaving that voltage for quite a while though. You’d be itching for an upgrade long before the CPU would die from that kind of voltage. I’m also not positive that the Northbridge had much to do with anything, but that stress-test was run with 1.55v applied, which is well within reason.

You might notice that the memory speeds are a bit lacking, though, at DDR3-800 6-6-6. Believe it or not, the CPU seemed to be the main bottleneck here, not the Northbridge. After another evening of tweaking, I found that an additional .025v on the CPU allowed a much more impressive memory speed of DDR3-1200 7-7-7. That setting also proved 12 hours IntelBurnTest stable, but I foolishly formatted our PCs OS drive before saving the screenshot elsewhere.

It goes without saying though, there is a lot of value slammed into this processor. That’s the truth even without overclocking being taken into consideration, but to add 820MHz to the CPU with no added voltage, and 1.25GHz with somewhat modest increases, is rather amazing. Not completely unexpected, but it’s nice to see such value for $80.