This past September, Intel released a follow-up to its successful Nehalem architecture, called Lynnfield. Throughout its launch campaign, Intel touted Lynnfield as being “Nehalem for the mainstream”, hence the title of our launch article. That title was appropriate, because Nehalem, for the first year of its life, was the only choice for those who wanted in on the company’s latest architecture, but thanks to the $300+ price tag, many held off and waited for more budget-conscious models to come along.

Lynnfield improved the situation, because its lowest-priced model, the Core i5-750, came in at around $200. Aside from its lack of HyperThreading, that particular model had everything that made Nehalem so great. In fact, it even improved on certain aspects, such as with its more effective Turbo feature. In the end, the entire Lynnfield line-up proved to be packed full of winners, as we discovered in our launch article.

However, even at $200 for the lowest-priced chip, there are many who are missing out on what Nehalem and its sub-microarchitectures bring to the table, and that’s where Westmere comes into play, with its dual-core models set to sell for between $100 – $284. At the low-end, the prices finally allow virtually anyone to take advantage of Intel’s latest architecture, and with a few extra benefits tossed in.

At its heart, Westmere is based on Lynnfield, which was derived from Nehalem. That means that these Westmere chips share the equally-impressive Turbo multipliers of Lynnfield, along with the removal of the Northbridge. Compared to Core 2 processors, Westmere has other benefits as well, such as HyperThreading, the AES-NI instruction set, and of course, improved power efficiency. Oh, and not to mention integrated graphics for its dual-core models.

Before we dive deep into Westmere, let’s take a moment to clear up all of the codenames that are floating around. Westmere, first and foremost, is the latest microarchitecture out of Intel, and is not the name of the processors which use it. Rather, those names are Clarkdale (Desktop) and Arrandale (Mobile). The former isn’t to be confused with Clarksfield, which is Intel’s mobile Nehalem (45nm). On the chipset side, all LGA1156 models thus far (P55, H55, et cetera) are classified as Ibex Peak. Future six-core Westmere’s (which will not include an IGP) use the Gulftown codename. Finally, Westmere’s IGP is codenamed Ironlake.

To help confuse things further, Westmere is ultimately based on Lynnfield, which was derived from Nehalem. That means that the same Nehalem features that were shaved off for Lynnfield are also gone from Westmere. This is putting it all simply, however, as Westmere features a few things Lynnfield processors do not, such as the AES-NI instruction set. We’ll tackle this and more throughout the article.

One of the biggest and most notable features of Westmere is that it’s built on Intel’s 32nm process, which makes it the first of its kind in a desktop processor. Intel was also first with 45nm, which we saw in the form of Penryn just a little over two years ago (oh, how the time flies). If Intel successfully sticks to its tick/tock cadence, we should be seeing a 22nm launch at some point during 2011. 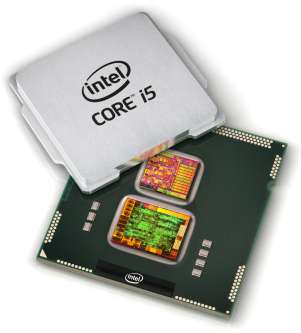 Thanks in part to this die shrink, Intel was able to do some interesting things, including adding in new features, and also adding a secondary chip onto the same processor, which in this case is an IGP (integrated graphics processor). Because both the CPU and GPU are separate, this isn’t a hybrid design, and given that the GPU is built on a 45nm process, it simply couldn’t be. But, what makes this design all the more interesting is that we’re one step closer to that hybrid design, which will undoubtedly occur in the future.

Because the IGP is located on the processor, and not a Northbridge or Southbridge, the chipset should run much cooler. At the same time, we’re able to cool both the CPU and GPU (the single chip) with a single cooler, rather than have one for the CPU, and a smaller, and whinier one, for the Northbridge/Southbridge. That in itself is a huge advantage to the new chip design, and should make HTPC building all the more easier.

The stock image above, showing off Clarkdale’s exploded view, makes it easy to understand how the two processors are laid onto this single chip, with the larger of the two being the GPU. With the help of the labeled die shots below, we’re able to see each chip in greater detail: 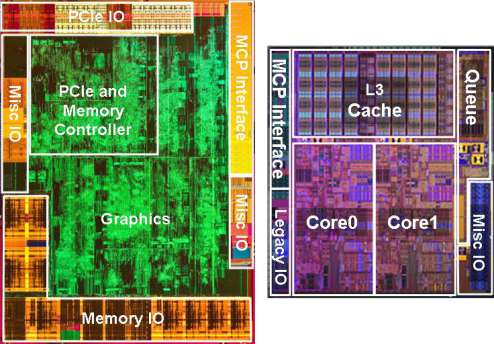 This to-scale image details a lot, and it’s easy to understand just how much larger the GPU is than the CPU. There’s a good reason for that, and it’s not 100% tied to the fact that the GPU is built on a larger process. Rather, you’ll notice that the CPU, unlike Lynnfield and Nehalem, does not have an integrated memory controller. Instead, that’s built into the GPU. With this design, it means that the GPU is going to be inherently larger to begin with, and the CPU smaller than it would have had been with the IMC.

There are a couple of reasons Intel might have taken this route, but the most likely one would be for the sake of ease. Since the GPU here isn’t hugely different from the one used in the G45 chipset, Intel decided to carry its design over to Clarkdale. Since previous IGP designs had the IMC built into the GPU, it seems Intel decided that sticking to that design would be easiest, and that’s the reason Westmere doesn’t have an IMC built into the CPU. Future Westmere chips, like Gulftown, will not take this same route, as it won’t have an IGP.

Should this be a concern? It depends, but for the most part, no. Because of this design, the memory latency is higher than it is on other current-gen processors, by around 25 – 30%, according to our Sandra tests. The reason that this is of little concern to most people is that applications typically aren’t going to respond much faster to tighter latencies (a fact I’ve exhaustively explored in the past). I’m sure Intel took its time in deciding on this design, and in the end, it found that the higher latencies simply weren’t an issue. For enthusiasts, it could be, but for all intents and purposes, this is a mainstream processor, not an enthusiast one.

We’ll talk a bit more about the Westmere architecture and its integrated graphics chip more on the following pages, but before we do that, let’s review Intel’s current processor line-up:

With the introduction of Westmere, I think it’s safe to say that we’ll be seeing the Core 2 line-up phased out very shortly, and with these new models and their pricing, there’s little reason to run out and purchase a Core 2 in lieu of one, even if you don’t need the integrated graphics. For this launch, Intel will be releasing a total of four Core i5’s, and two Core i3’s, along with their respective chipsets: H55 (mainstream), H57 (upper mainstream) and Q57 (business).

Of all the processors, which are spread across three microarchitectures, six models belong to the Core i7 family, five to Core i5 and two to Core i3. There’s also the lone Pentium G6950, which will surely be followed-up with other models in the year to come. Intel hasn’t disclosed pricing on this chip, so I put an estimate on it at around ~$100. Like Core i3, Pentium models will not feature a Turbo multiplier, and like the Core i5-750, it also lacks HyperThreading.

Westmere’s launch is one worth celebrating, because finally, everyone will have access to Intel’s robust Nehalem-based architecture. We’re not into the sub-$100 realm yet, and won’t be for some time, but with prices ranging from $100 – $999, there’s certainly a processor model for most anyone looking to build a new PC, regardless of what your needs are.