Throughout the article thus far, we’ve made it clear that the graphics processor in Clarkdale isn’t designed for the enthusiast, and I’m sure that comes as a surprise to no one. Integrated graphics in general are nowhere near as advanced as discrete cards where gaming performance is concerned, which is one of the reasons Intel touts its IGP as being perfectly suited for the casual gamers, who play games like Sims 3, and nothing more advanced than World of Warcraft.

During my time with Clarkdale, I spent a fair amount of time on the gaming aspect, and tested out a variety of casual games that Intel mentioned. Sure enough, the performance was just fine, and I ran into no show-stopping issues. For casual games, I tested out a couple of PopCap titles, along with Sims 3, Nancy Drew: Ransom of the Seven Ships, Crazy Machines 2, and had no problem with any.

The rule of thumb is, if it’s a casual game with relatively simple graphics, then it should run fine on Clarkdale. Sometimes, though, even casual games have a hard time in running, so it really depends on just how much acceleration the game wants to use. One example is Gumboy: Crazy Adventures. This 2D platform game makes heavier use of accelerated graphics than most casual games, so I had a difficult time getting it to run smoothly. Oddly, the game ran at about 30FPS, but every couple of seconds, the game would stick for about 3 – 4 seconds, then unstick and run fine again.

I couldn’t test out every casual game out there, but just be aware that if the one you’re after makes interesting use of 3D, it may not run perfectly. This seems to vary from game to game, as I played games much more advanced than Gumboy just fine, so it’s a little hard to pinpoint what will work fine and what won’t. Still, we’ve established that for casual gamers, Clarkdale is fully suitable, but what about the more advanced games, such as FPS and racing titles?

To help give Clarkdale an appropriate test in this regard, I loaded up a variety of current games to see what it would take to make them run, and I admit, I had a fair bit of luck with most titles. Below, you can see a variety of screenshots from the four main games I tested with, and though the graphics aren’t top-rate, even at the given resolution, it’s certainly nice to be able to get any gaming like this on an IGP.

In Call of Duty: Modern Warfare 2, Clarkdale was able to handle a 1280×1024 resolution, with the lowest detail settings possible. During my testing, I ran into a fair amount of issue with this particular title, but it’s frustrating, because I feel like I shouldn’t have. For the most part, the game ran just fine, and was smooth enough for me to complete multiple online matches, but for whatever reason, about 50% of the time, the game would crash during a round, locking up the entire computer.

I talked to Intel about this, and it was a little confused as to the problem. One member of their benchmarking team has been running the game on an Arrandale notebook for the last little while, and while he did note that this issue occurred once, he also mentioned that he completed half the single-player mode without issue.

During all the crashes I experienced, there was no telling the reason, but if I had to guess, I’d blame the limited 128MB GPU memory. We’re using a low resolution here, but games use more memory than ever, so being able to dedicate more than 128MB would be nice. The only reason I assume this could be the issue is that one crash happened at the same time as an explosion occurred in front of me.

“Can it run Crysis?” Yes, yes it can. Albeit at 1024×768 resolution and the lowest possible detail settings. Despite all that, the game actually didn’t look too bad, and it ran quite well, with no random sticking or lag. I played through most of the first level in the game to come to this conclusion, and also a level later in the game which takes place in a snowy world. Overall, the performance here was rather impressive. 1280×1024 was simply impossible, though, for probably obvious reasons. Crysis is one heck of a glutton when it comes to PC games.

Similar to Modern Warfare 2, F.E.A.R. 2 ran at 1280×1024 just fine, with the lowest detail settings. There were no real anomolies to mention here, except that by looking at the screenshots now, the game appeared a bit dark. I don’t believe that to be the fault of the GPU at any rate, but rather that I simply didn’t adjust the in-game brightness at all. Because my monitor tends to automatically brighten up dark scenes, I didn’t notice it at the time.

Left 4 Dead 2 was a bit trickier to get working well, but in the end, 1280×1024 was again possible on the lowest detail settings. The performance wasn’t perfect, but it was certainly playable, even in the heavier action scenes. But, given that performance isn’t superb, I’m not sure I’d recommend this for serious online gamers, as it’s harder to be a precision gamer with lower resolutions and weaker performance.

While all of the above games worked relatively painlessly on Clarkdale, there were a few other titles I tried out that didn’t work out well at all. One example is seen below, Call of Juarez: Bound in Blood. As you can see, the game is textureless, and though it’s not easy to tell by the picture, the models themselves were stick figures… unable to move their arms, legs and so forth. Rather, they simply slid along the landscape, which was pretty funny to see.

Another game I tested, Race Driver: GRID, failed to load at all. The screen would turn black, but at that point, nothing would ever happen, so I was forced to Alt-Tab out in order to kill the process. Overall, I had
a couple of games with bizarre behavior, so it’s worth noting. But again, Intel is stressing this as a chip to handle casual and mainstream gaming – game titles that make up near 95% of the market’s sales. It does that, so Intel’s mark has been hit. 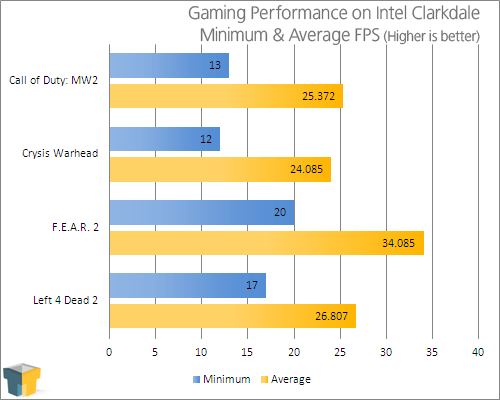 You can see that for the most part, the performance isn’t extreme, but it’s definitely manageable. On lower resolutions, you can seem to get by a bit easier on lower FPS, so even with ~25FPS sounding awful, all of these games were surprisingly playable, even Crysis, with its minimum FPS of 12.

I really wish I knew what was causing my Modern Warfare 2 issues, though, because most of the time, the game ran very well. It was just those random crashes that got in the way. Intel notes that it’s probably a software issue, not an issue with its hardware or driver, and whether or not that’s the case or not, I’d hope to see improvements made in the future.