As we touched on the GPU earlier in the article, it became clear that one of the biggest features of Clarkdale’s IGP is full HD support, which currently tends to always point to Blu-ray. In addition to full AVC/VC-1/MPEG2 acceleration, dual-decode has been added, for those flicks that offer a picture-in-picture feature, usually for commentary. That feature alone proves that Clarkdale is more than capable of delivering a compelling Blu-ray experience, given it can essentially handle two playbacks at the same time.

For a more thorough look at what else Clarkdale’s IGP brings to the HD arena, I recommend looking back through page three of this article, as it was all tackled there. With Blu-ray such a focus of Clarkdale, I couldn’t have found a much better excuse to take time away from work to kick back and watch a couple of movies. So that’s just what I did, and all of my findings are below.

As mentioned above, Clarkdale’s IGP supports acceleration for the three most common Blu-ray encoding formats, AVC (MPEG 4), VC-1 and also MPEG 2, which is typically used for alternate features, not the main film itself. Either way, if you have a Blu-ray movie, you can be sure it will benefit from the acceleration offered here, which at the end of the day, means lower CPU usage and smooth-as-a-baby’s-butt playback.

Throughout all of my testing with Clarkdale, I tested out a wide variety of Blu-ray’s from my collection, to see if any stuttering or any other anomaly occurred. I’m pleased to say that I couldn’t find a single issue, and my experience overall was excellent. I watched through both 2 Fast 2 Furious (AVC) and Fast & Furious (VC-1) in their entirety, using CyberLink’s PowerDVD 9 Ultra, and there were no hiccups whatsoever to speak of. The movies loaded fast, paused and restored fast, and had no graphical issues whatsoever.

Below are direct screengrabs from a couple of Blu-ray’s I tested rather thoroughly, and as you can see, all look excellent, with rich color, sharpness and clarity.

To see how Clarkdale fared performance-wise with its Blu-ray playback, I ran two movies, with different encodings, through three of the most popular DVD/Blu-ray playback suites on the market, Corel’s WinDVD, CyberLink’s PowerDVD and also ArcSoft’s TotalMedia Theatre. To test, I played the same 30 minute portion of each movie with each player, and used Everest Ultimate Edition 5 in order to track CPU usage. The results below are the average and maximum CPU usage percentage over that half-hour span. 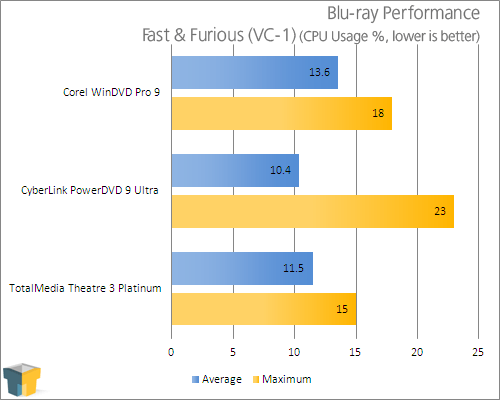 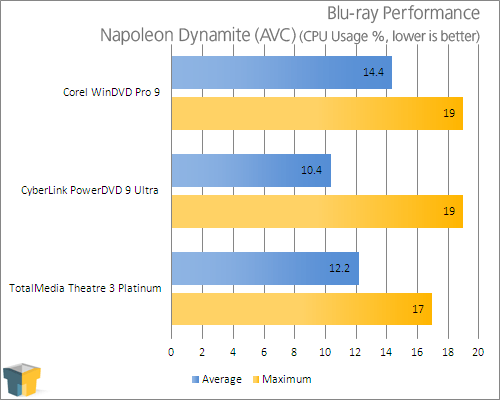 It’s clear that Blu-ray playback is hardly an issue for Clarkdale, with an average of 10 – 14% of the entire CPU being used. Even the maximum figure we saw, 23% with Fast & Furious using PowerDVD, is modest… that’s a mere single thread, out of the four that the CPU offers. It’s easy to understand why dual-decode is possible, with so much horsepower left over. Overall, Clarkdale can handle Blu-ray without an issue, it goes without saying.

Note that CPU usages may vary when you’re using additional high-end features, and perhaps even display connectors, but from what we saw here (running through HDMI), it would take a lot to make a dent in the CPU usage, regardless of your setup.