Westmere’s launch might seem tame overall, but in reality, we’re being brought into a rather significant shift of focus in the computer industry. For as long as there will be PCs, there will be enthusiast PCs and parts, but with Westmere, and particularly Clarkdale and Arrandale, we’re seeing an increase of integration, and also a focus on smaller PCs.

At Techgage, we try our best to cater our content to all segments, although I admit that we’ve not touched on the integrated, or low-end, segments much at all. With Clarkdale, we were forced into it, as the processor has an integrated GPU. But, this is for a reason, because it’s the beginning of things to come. Although the GPU is simply placed next to the CPU at the moment, we can expect a total fusion design in the future, from both AMD and Intel. Integration is king, and there’s no sign of that changing.

In a press deck Intel developed for its Clarkdale press kits, there are a couple slides worth looking at, because they showcase the important trends to take note of in the industry. As you can see in the foil below, both the minitower (mid-tower) and tower (full-tower) numbers are gradually sliding, whereas all-in-one PCs, and SFF/USFF are growing quite significantly. 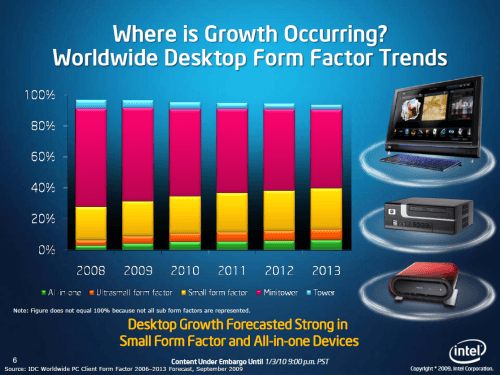 As a PC enthusiast, this can be considered a disheartening trend, but I’m certain that there will always be a market for enthusiast components and PCs. The real reason we’re seeing such an increase in small PCs and decline in larger PCs is part in thanks to the fact that more people than ever are computing, and likewise, more people than ever are building secondary PCs, many of which are small in form-factor, and designed for home server or HTPC use.

We’re not covering Westmere’s mobile part, Arrandale, today, but I still wanted to point our trends seen in the notebook scene, because they’re equally as interesting. In the foil below, there are a couple interesting happenings. It’s no surprise that the sub-12″ market has seen stark growth, and will continue to see that going forward, but it is somewhat surprising to see the 15″ notebooks decreasing in popularity, while 16″+ notebooks are growing, albeit at a much slower rate than the others. 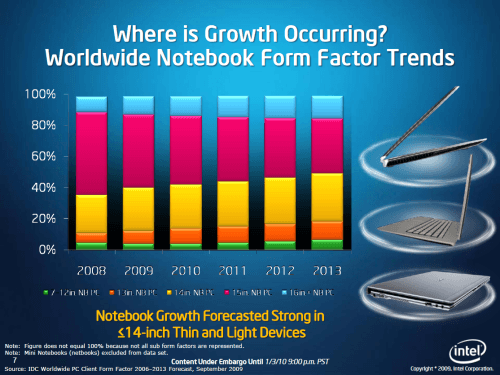 It can be assumed that in the 16″+ space, consumers are beginning to prefer notebooks to desktops, and as a result, they’re using these notebooks as DTR’s (desktop replacements). It’s also clear that 15″ is a dying form-factor, as 14″ is creeping up to almost match its sales in 2013.

I won’t include slides for everything Intel points out, but I’d like to touch on a couple of trends that I found interesting, although I admit not many have much to do with Clarkdale in particular. From an Internet users perspective, at the end of September, there were 1.73 billion users online. Compared to the 361M at the end of 2000, that’s some stark growth… 380% in a mere nine years. Adoption doesn’t seem to be slowing down, either, which is important, since the Internet is increasingly becoming much more than just a luxury.

In a similar vein, Intel’s PDF also points out the insane growth in online video, and I’m sure it will come as a surprise to no one that this is one area that’s simply exploded. According to Pew Internet & American Life Project, a staggering ~90% of people online between the ages of 18-29 are using the net to watch video. That number drops a bit to ~70% for 30-49, and continues to decline at 50+. 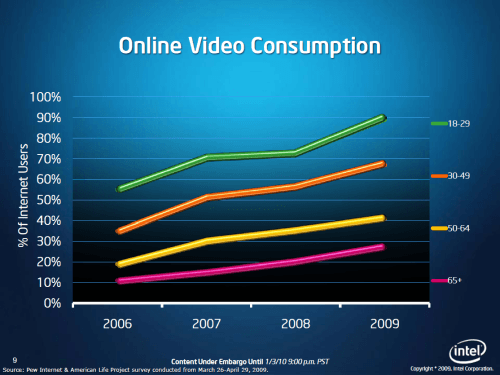 As a result of this increased video viewing online, the number of people creating their own content to publish online has also increased. In 2008, that number hovered around 80 million for the US, while by 2013, it’s estimated that it will be closer to 115 million. Seems like a small boost, but realize that this is US-specific, and that 35 million boost is just over 10% of the population.

What does Westmere have to do with any of this? Faster media performance, of course. Because online video and creation is more popular than ever, Intel is pushing these numbers to show just how beneficial its new and improved processors are. In the company’s internal surveys, it found that 27% of computer users edit photos a couple of times a week, while 39% play casual games. Westmere, and more specifically Clarkdale and Arrandale, enable consumers to do all of this, faster, and easier.

More than ever, we’re seeing a push from Intel to let people know that upgrading that old PC might be a good idea. According to the PC Gaming Alliance, 250 million people worldwide play casual games on a regular basis, and with Westmere’s IGP, consumers will be able to load up and play those same games without a discrete GPU. See? The goals of Westmere, and its targets, are becoming increasingly clear.

In another interesting foil, preliminary forecasts show that between 2010 – 2011, about 475 million older PCs will be “retired” in order to make room for faster machines. By retired, it means that they will not be the main PC, not necessarily that they will be thrown into the trash. As more and more people begin using the PC for more than just e-mail, the demand for faster performance is higher than ever. 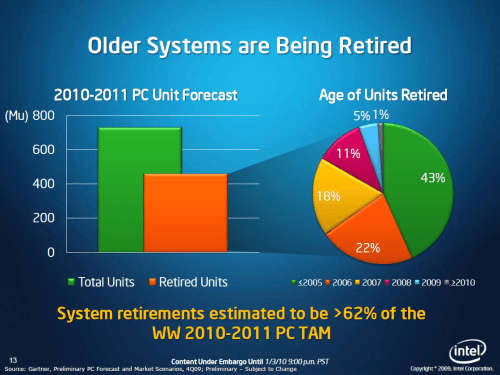 To give a real-world example of performance increases, Intel notes that while on a 2006 notebook, using the Core Duo T2250, creating an HD vacation video took about 3 hours and 2 minutes. On today’s Core i5-430M processor, the same process takes just 49 minutes. These are the numbers that people want to see, because even if you’re not a PC enthusiast, shaving up to 4x the time off of a project is going to be enticing.

Mentioned above was the fact that Westmere and its IGP were designed to cater to casual gamers, so it’s appropriate that we tackle that, and more, on the next page.