Clarkdale might be a mainstream processor, but it’s easily one of the most interesting we’ve ever taken a look at here at Techgage. Likewise, putting together this launch article required a lot more work than what’s typical, because we had so many new factors to take a look at, such as with the integrated graphics chip. All in all, though, benchmarking and playing around with Clarkdale was a lot of fun, and for many different reasons.

At the forefront, the biggest feature of Clarkdale is the fact that it’s built on a 32nm process. Intel is officially the first out the door with such a processor, and as we saw throughout our power consumption tests, there are some benefits to be reaped from that, as both the idle and load power draw decreased a fair bit, even with a discrete GPU.

Clarkdale is our first real foray into dealing with IGP, so unfortunately we don’t have comparative results to G45 or other IGP solutions. However, what I found extremely interesting is that at absolute full load, our machine didn’t go an inch above 124W, and it idled at 76W. During a regular workload, these results are going to be even lower. Compared to a regular gaming PC, these results are almost 1/4 of typical power draw, so that’s exciting to see.

From a gaming perspective, the Clarkdale IGP delivers where it needs to. It handles most casual games just fine, and even some more advanced titles, such as F.E.A.R. 2: Project Origin and Left 4 Dead 2. The IGP is by no way a replacement for a discrete GPU, because even a $50 – $80 graphics card would improve performance at least 5x, but it’s certainly better than having no gaming potential at all.

What I am most impressed with is the IGP’s Blu-ray performance. Intel’s G45 was riddled with issues from the get-go, but after those were fixed, we saw the company go on a road to recovery, and with its Westmere launch, it looks as though we’ll all see a smooth launch. I spent quite a bit of time with Blu-ray testing, and didn’t once see any issue, whether it be stuttering, slow playback or anything of the like.

When Intel launched its Nehalem processors last fall, I think few people were left unimpressed. Of all the features I dug about the architecture, it was probably HyperThreading that I came to like so much, because it made a real difference in many different scenarios – especially 3D rendering. The new microarchitecture also made huge strides with ray tracing performance, as is easily seen in our 3ds Max and POV-Ray tests. Then there’s Turbo… which is essentially free performance for those who don’t want to overclock.

With Lynnfield, certain Nehalem features were chopped off, such as a triple-channel memory controller, but overall, nothing was dropped that would affect most people. If there was one thing, it would be the lack of HyperThreading on the Core i5-750. What I find interesting about Westmere, at least up to this point, is that all of the models (aside from the Pentium) support HyperThreading. That’s a bit bizarre, if you ask me, because out of the entire Core i line-up, the Core i5-750 is the only model currently lacking the feature.

I supposed this will begin to make a little more sense if Intel continues to release follow-up models that also axe the feature, but it’s a bit strange to see all of these sub-$200 Westmere chips support it, and not the Core i5-750, which comes in at $195. But while that’s a potential downside for the i5-750, it’s a huge benefit to all the Westmere chips, because as I mentioned before, HyperThreading is a very good thing, and in applications that can take advantage of it, huge benefits are seen.

From the perspective that Westmere is essentially a dual-core Lynnfield scaled down to 32nm with AES-NI and an IGP tacked on, there’s absolutely nothing to dislike about the chip. Last fall, I was wowed by Nehalem thanks to its incredible performance, and with Lynnfield, my love for the architecture only increased. With Westmere, we finally see Intel’s latest and greatest microarchitecture available to the masses. That’s fantastic.

If there’s one aspect of Westmere, or in particular, Clarkdale, that really sticks with me, it’s not the product itself, but the direction computing is going. It’s no surprise to anyone that computers are getting smaller and smaller, and integration is more hyped than ever, but with Clarkdale’s launch, we’re really starting to see an increased focus from vendors for small PCs. 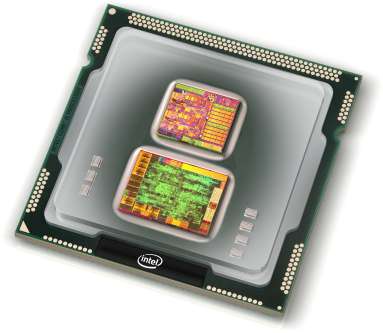 For Clarkdale, the most popular chipset choice will be H55, and from what I’ve seen up to this point, the majority of boards equipped with it will be of the mATX form-factor, not ATX. Rather, vendors will focus on H57 for the latter form-factor. In talking to various board vendors, the general consensus seems to be that we are indeed heading quickly into the small PC realm, and Clarkdale is the first real push, thanks in part to its H55 counterpart.

There’s been a lot of discussion lately on our forums regarding this very subject, and it’s becoming increasingly clear by the day that for most people, mATX boards suffice. I can’t possibly disagree with that, because for most people, all they need is a single GPU, and another slot for some other peripheral. It’s not as though mATX boards are lacking on storage or peripheral expansion, so the smaller form-factor makes a ton of sense.

It can be argued that previous generations had similar launches, where mATX boards were the emphasis. That’s true, because with G45 as an example, all of the boards to use it were mATX. But the difference here is that the Clarkdale line-up is Intel’s latest mainstream chip, and it’s likely to be paired with an mATX board. When Core 2 Duo’s launched, we still saw ATX boards as the focus, not mATX. Either way, the shift to smaller computing is definitely the focus by many vendors today.

With that, it makes sense to call Clarkdale both a great desktop chip, and also one that’s perfectly suited for HTPC use. Regardless of how you use it, Clarkdale is a very, very fast dual-core, and it makes many strides in both performance, efficiency and other features when compared to the Core 2 line-up. As much as Core 2 will always have a place in my heart, I’m stoked that Nehalem is finally available to everyone.