For Westmere’s launch, Intel is putting emphasis on the fact that the processor is equipped with an integrated GPU, and probably for good reason. The company is the first to do this in a typical desktop processor, and although we’re not being given a fusion design, what we have here is still very noteworthy. But ultimately, what benefit does this design offer the consumer? There’s one big one.

With Lynnfield’s launch a couple of months ago, we saw the first consumer motherboards that lacked a Northbridge. This design was able to happen because the integrated memory controller (IMC) was moved onto the CPU. With a shifting of other components, the Northbridge was obliterated, and we were left with the CPU and Southbridge. In previous architectures that included graphics, the IGP+IMC was its own chip, the Northbridge. With that moved straight onto the processor, we’re also able to rid the typical Northbridge for Westmere, like we saw happen with P55.

The benefit is that instead of having two chipsets on a motherboard along with the CPU, we now have a single chipset and the CPU. This allows for greater flexibility from motherboard vendors, since they won’t have to make room for a Northbridge and all of its traces. And because the GPU is much closer to the CPU, the memory bandwidth and latency may improve also. I’d be willing to bet that the differences would be minimal, however, and not noticeable in the real-world. If the CPU and GPU were fused together, that would change.

In past generations, Intel applied simple names to its GPUs, and with Westmere, that doesn’t change. Throughout all of Intel’s marketing materials, I’ve actually had a had time figuring out what the IGP was called since it’s been called something different all over. The term I’ve seen most often is “Intel HD Graphics”, so I assume that’s the final and most appropriate name. Although the GPU will be clocked different on some CPUs, the name of the GPU itself doesn’t change. All of the IGPs in Clarkdale / Arrandale have equal feature-sets.

As I touched on elsewhere in this article up to this point, Intel is pushing its IGP in Westmere as being best-suited for the casual consumer. That means that all of the graphical features of Windows 7 will work just fine, and likewise, the same can be said for casual games. But, there’s another important feature that can’t be ignored, given it’s growing popularity: HD Playback. As you’d expect, Intel’s newest IGP touts full Blu-ray support, and even includes dual decode, for those movies that include a Picture-in-Picture option.

When G45 launched last summer, it wasn’t that well-received, due to it’s Blu-ray playback issues. It took a couple of months to see those ironed out, but they were, and things have improved ever since. The IGP found in Westmere isn’t a simple copy/paste of G45, but rather includes some upgrades worth noting. To help me explain those upgraded or new features, we can refer to another slide from Intel: 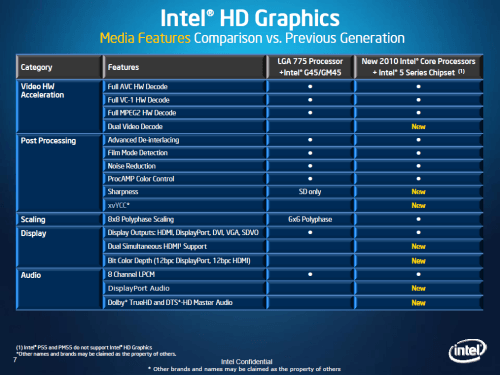 From an acceleration standpoint, the new feature here is dual decode, which means that Blu-ray movies (or other HD content) that features Picture-in-Picture content (such as commentary) will playback just fine. For post-processing, we’re given sharpness acceleration, and also the ability to take advantage of the xvYCC extended color space. Display support has also improved, with the addition of dual HDMI, and also increased color depth, at 12-bit, for both HDMI and DisplayPort. Finally, audio is also improved, with the addition of audio through DisplayPort and also native support for Dolby True HD and DTS HD.

For those looking to build either a regular or home theater PC with Westmere, there’s really no important features missing, and unless your a devout home theater enthusiast, chances are that all of the features here will suit you just fine. It should be noted that Intel works closely with developers of Blu-ray playback software, which include Cyberlink, Corel and Arcsoft. All three of these companies develop software that can take good advantage of Westmere’s IGP.

Currently, none of these offer acceleration for DVD upscaling with the help of the IGP, but the feature will work just fine regardless. In the case of Westmere, the CPU will simply be relied on much more than the GPU, as you’d expect. If there’s one fact to take away from all this information so far, it’s that Westmere, in the form of Clarkdale and Arrandale, can handle Blu-ray and other HD playback just fine, while supporting leading AV technologies many enthusiasts want to see.

Once again, I’ll use one of Intel’s slides in order to help me explain all of what’s new with Intel’s latest IGP from a technical standpoint. It should be stressed that this IGP is designed for casual gaming, not enthusiast gaming. Don’t expect to pick one up to play games at higher than 1280×1024, because that won’t be the case anytime soon. In all of the exhaustive surveys done, though, it’s clear that the market-leading genre for games is casual, and as a result, Intel is stressing that its latest IGP handles the vast majority of those games just fine.

By “casual”, I mean games like Sims 3, Bejeweled, Nancy Drew, anything from companies like PopCap and so forth. The GPU doesn’t stop there, because it can also handle games like World of Warcraft, but that’s about as far as you’ll go. I’ll touch a lot more on the gaming capabilities of this upgraded IGP later in the article, but for now, let’s take a brief look at why this IGP is better than last-gen: 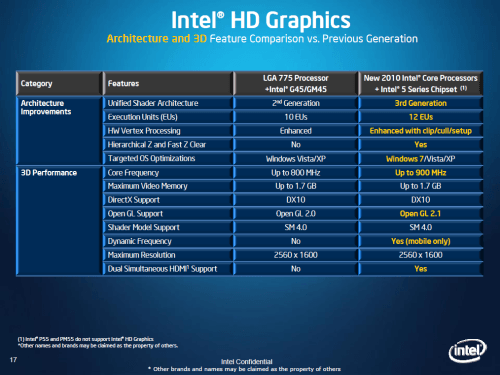 At the forefront, the latest IGP uses Intel’s 3rd generation Unified Shader Architecture (I wonder why they don’t abbreviate this??) and also bumps up its execution units from 10 to 12. Its graphical capabilities have also been increased with improved vertex processing, hierarchical Z and fast Z clear rendering and of course, support for Windows 7. The core clock has also been boosted up to 900MHz, and coupled with the bump of execution units, it’s safe to say that this IGP is faster than what we saw with G45.

One thing worth pointing out is that while Intel boasts 2560×1600 resolution support, that’s only if you’re using a DisplayPort connection. For DVI (due to its single-link connection), you’ll be limited to 2048×1536, while for HDMI, the limit is 1920×1200. Intel fully believes that DisplayPort is the future, and given its growing popularity in consumer monitors, that seems to be true, so no argument there.

The lacking resolution for DVI and HDMI might be a problem for some, but I think it’s safe to say that the vast majority will not be running anything higher than 1920×1200, so from that standpoint, Westmere’s IGP will suit most people just fine. If you do need 2560×1600, then chances are you have a newer display with DisplayPort built-in. Either way, the IGP here will handle at least 1920×1200 on all connections it offers, and of course, 1080p for all your media needs.

With Westmere’s IGP being a big focus for this launch, Intel wanted to help ring in the celebration right with a completely revamped control panel, which looks much, much better than what we’re used to seeing. I first got a glimpse at this back at IDF during a meeting, and I have to say, a UI really doesn’t matter at the end of the day as long as it works, but this one looks very nice. It might help that I have an affinity towards the color blue, though… 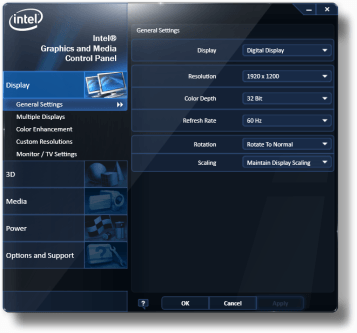 The control panel doesn’t only look better, but it offers much better overall tweaking ability as well, from being able to set your custom resolutions to having more robust graphics options, with the ability to tweak texture detail, AF and vertex processing. Another feature I like is the ability to quickly and efficiently change the rotation of your display. With a simple three-key combo, you can turn your screen to portrait mode, and even upside down. The best thing about is that it does its action fast… much faster than I’d expect.

Overall, the revamped control panel packs in more features, and looks better while doing so. For the consumer software side, this is one of the best releases from Intel, even if it’s only based on the looks alone!