For years, AMD has been offering “Black Edition” processors that cater both to the consumer who wants the best AMD has to offer, and overclockers who want as much flexibility as possible. The reason is unlocked ratios and multipliers, something that on the Intel side required expensive “Extreme Edition” processors.

Given that Intel has been on top of the processor game for years now, it’s difficult to say that the company has finally caught up in this regard, but it has. There’s no fancy naming scheme here, though… simply a “K” at the end of the model number is all you need to look for, or alternatively, the word “Unlocked” on the box.

K processor models have a near identical non-K model. The differences are that the K models are unlocked, meaning that they can be overclocked without affecting other PC components, such as your RAM. So, if you’re looking for a massive CPU overclock, you don’t have to worry too much about purchasing a super-fast kit of memory to support it – unless you’re looking for the best of both worlds.

As you would expect, K models carry a bit of a cost premium, but as it stands, the only other way to have an unlocked Intel CPU is to purchase an Extreme Edition, which is obviously even more costly. K models essentially allow any enthusiast overclocker to have some unlocked fun, without splurging on an Extreme Edition. 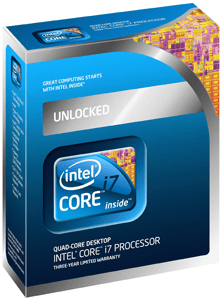 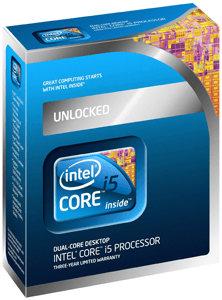 For this launch, Intel has released two different K models. The highest-end is the Core i7-875K, which is specced identically to the Core i7-870, and it happens to be a blazing fast processor. It’s of course a quad-core with eight threads, and features 8MB of L3 Cache. As it’s based on Lynnfield, it doesn’t feature a 32nm process, or the AES instruction set. This model is clocked at 2.93GHz and can hit 3.60GHz on some cores thanks to Turbo, depending on the workload.

Second, there is the Core i5-655K, which is based on the Core i5-650. This Clarkdale model does feature a 32nm process and the AES instruction set, and is clocked at 3.20GHz, with Turbo boosting that to 3.42GHz. Also as a Clarkdale model, this CPU features an integrated GPU, although something tells me that enthusiast overclockers will not likely be making too much use of it.

As you can see from the images at the top of the page, Intel has also altered the box art for the K processors, but not by much. Unlike AMD, which sells its unlocked models in a black box (rather than purple or green), Intel has opted to add the word “Unlocked” to its boxes, still making them easy to spot at retail.

Alongside this launch, Intel is also pushing its launch top-end P55 model, the DP55KG, which it feels is suitable for high-end overclocking. Unfortunately, due to this launch occurring so close to Computex, and planning for that dominated so much of my time the past couple of weeks, I was unable to use Intel’s board for the task, and opted to stick with the board I was already used to overclocking with.

Once back from the show, I’ll give the company’s board with latest BIOS a proper test, and see just how far it can be pushed. I’ve had poor luck overclocking with Intel’s boards in the past, but during a meeting during this year’s CES, the company reassured us that it was putting much more of a focus on overclocking going-forward, so I look forward to spending some honest time with the board once I return.

Overall, there’s not much else to say about these processors, as we’ve already written in-depth articles on each respective architecture. Who are the K models for? I’m of the opinion that they’re either for those who really don’t want to splurge on a higher-end kit of RAM, or hardcore overclockers – both of whom would want to go well beyond the 4.0GHz mark.

With that said, let’s tackle our test system and methodology, than move right into our performance and overclocking results.