For the sake of CPU stress-testing, we use LinX. Compared to other popular CPU stress-testers, LinX’s tests are far more grueling, and proof of that is seen by the fact that it manages to heat the CPU up to 20Â°C hotter than competing applications, like SP2004. Also, LinX is just as effective on AMD processors. Generally, if the CPU survives the first half-hour of this stress, there’s a good chance that it’s mostly stable, but I strive for a 12 hour stress as long as time permits.

To preface our overclocking report, I’d like to mention that due to the overall tight timing of this embargo, I wasn’t able to devote as much time to overclocking these two processors as I would have liked, due to other performance testing for other content needing to be done at around the same time.

For stable overclocks, I like to stress test for up to eight hours if possible, but here, I just went for 40 minutes for each run of LinX for the sake of time. If I hit that, then I decided to benchmark with it. I can’t consider these clocks truly stable, however, due to the fact that I couldn’t stress them for far longer.

To kick things off, the i5-655K overclocked like a dream, as was to be expected given that it’s a dual-core model, and that our previous Clarkdale overclocking adventures delivered similar results. The difference here, though, is that our RAM speeds didn’t leave DDR3-1333.

To reach 4.56GHz, I had to use a rather high voltage of about 1.475V, and 1.500V for the QPI bus. Even though the BCLK wasn’t drastically changed, the extra voltage was needed for any sort of stability – even when we kept it at 133MHz. 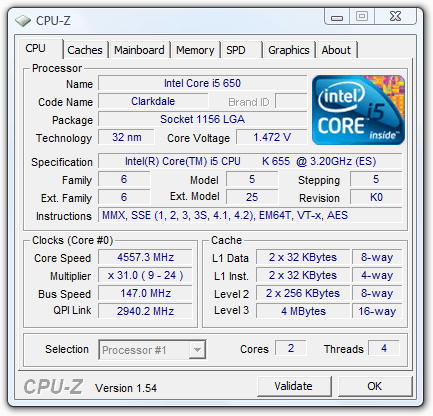 As expected, the performance increases with our overclock scaled rather well, with the exception of some benchmarks, such as Lightroom. Oddly, the AES256 saw the same kind of decrease from overclocking that we saw with our Core i7-980X Extreme Edition review. I’m unable to explain this, as every-single other benchmark saw an improvement, but it was consistent.

Although it’s more difficult to overclock a quad-core compared to a dual-core, I had an even more difficult time overclocking the i7-875K than I expected. To hit 4.12GHz was a challenge. I didn’t have to use voltages quite as high as I did for the i5-655K, but that’s because it didn’t seem to help at all. But again, more time might need to be spent in order to get a better overall clock. 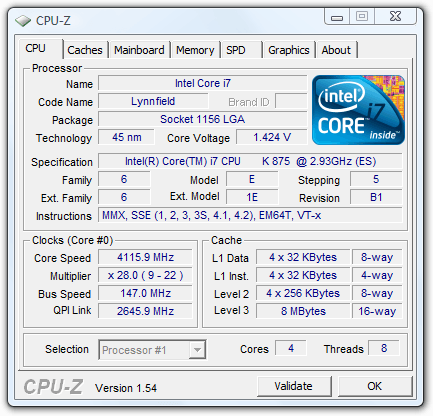 Once again, the scaling is quite good. We don’t have the oddball AES decrease here, as we saw with the i5-655K, so it seems likely that the AES instruction set has something to do with that oddity. It does seem strange that overclocking can worsen the performance there, and it’s something I plan to investigate in the near-future.

Overall, these processors deliver just the kind of overclocking I was expecting. As far as I can tell, and based on all of the information Intel has given us, K processors are not cherry-picked. That means that aside from their unlocked likeness, their top-end overclocks shouldn’t vary too much from current Clarkdale and Lynnfield models.