For the sake of CPU stress-testing, we use LinX. Compared to other popular CPU stress-testers, LinX’s tests are far more gruelling, and proof of that is seen by the fact that it manages to heat the CPU up to 20Â°C hotter than competing applications, like SP2004. Also, LinX is just as effective on AMD processors. Generally, if the CPU survives the first half-hour of this stress, there’s a good chance that it’s mostly stable, but I strive for a 12 hour stress as long as time permits.

When it comes to overclocking, nothing has been simpler to deal with over the past couple of years than Intel’s processors, especially since Conroe. You can always pick up a dual or quad-core and expect a good experience, but for Gulftown, we’re dealing with two extra cores and a different die design, so it’s hard to just assume that we’ll see the same kind of overclocking potential as we’ve become accustomed to.

There’s also the concern that if just one core on the die is less-than-ideal, then it’s going to hold back your top-end overclock. To find a “perfect” chip might be rare, but I think generally speaking, it shouldn’t be too hard for anyone to achieve at least 4.0GHz on the i7-980X, and that’s basically what we accomplished as well, albeit with 50MHz tacked on top of it. 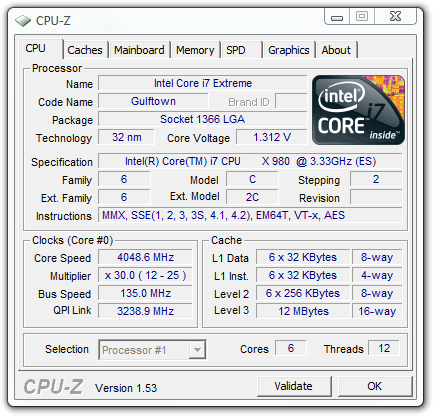 In talking to Gigabyte, I was told that 4.2GHz should be possible, but for me, no matter what I tried, I couldn’t achieve stability with LinX. I might have been able to attain 4.1GHz and still retain that same stability, but I left it at 4.05GHz as all I had to do was increase the multiplier and voltage (to 1.350v). Because the Core i7-980X has an unlocked multiplier, you don’t have to touch the BCLK at all.

I’m still pleased with 4.0GHz, because though it might still be only 500MHz above stock, it’s a nice number to see. But do we actually have a reason to go through with it?

It’s hard to say, unless you consider a 13% increase in performance to be worth all of the extra stress on the CPU. Personally, I don’t think so, because as it is, the i7-980X is extremely fast to begin with, and really, 10 or so percent really isn’t going to make much of a difference in the real-world. That changes if we’re talking about 25%+, but here, it’s just too difficult to tell.

If you’re running rendering projects or anything heavily math-based that takes hours or even days to complete, then the overclock might be a bit more worthy. After all, 90 hours is a lot better than 100 hours, when it comes to projects of that magnitude.