Today, most people are completely satisfied when using a dual-core processor, and for those who want a bit more oomph, there are countless quad-core models out there to choose from. But as it stands, many people don’t believe that even a quad-core is worth the money, because they figure that no application or scenario they deal with could even possibly take advantage of all the cores.

I’m willing to bet that that’s not really the case, because even some of our simpler apps we use for testing, performance is better when we increase the cores. The benefits of an increased number of cores comes down to two things… improved multi-tasking, and improved performance where heavily multi-threaded applications are concerned. The bigger and better your CPU, the less you have to worry about processes hanging.

Comparing the Core i7-980X to the quad-core i7-975, Intel touts that performance is increased upwards of 50%. For video effects, we could expect about a 34% increase in overall performance, and then 37% for 3D rendering. For game physics, we’ll see the near 50% increase, as those algorithms tend to be very scalable with the number of available cores. 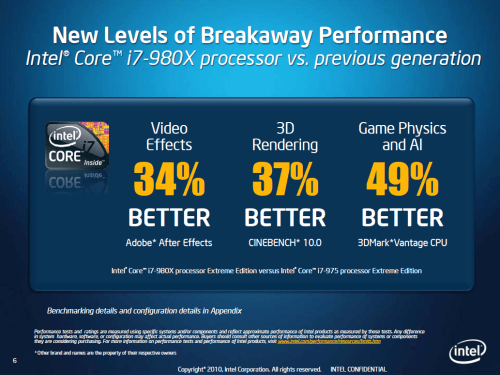 Bringing up our Skulltrail article once gain, one comment I had at the time was that despite 8 physical cores being available in the PC, it was hard to find any process outside of a synthetic benchmark that could take advantage of all 8. At best, we’d see 6 or 7 cores being used, but not 8. The same can be said here, and Intel admits it. Even though we’re literally seeing a CPU with 50% more cores, we’re not going to see a 50% increase in performance in all areas. For video and 3D, it’s more like a ~35% increase. That’s still rather impressive, and does do well to set itself apart from any quad-core model.

I mentioned before that multi-threaded support in applications and games is constantly improving, and its proven with a look at Intel’s most recent version of a list it develops that gives us a one-stop shop to see which applications and games we should test with. If you are interested in looking at the full list, we have it hosted here.

It its press deck for Gulftown, Intel specifically mentions a couple of applications and games that are either out now, or soon to be out, that take good advantage of multi-core processors. The first mention is of Vegas Pro 9.0c. There, the Vice President of Technology for Sony Creative Software said, “As a result, Vegas Pro 9.0c automatically takes advantage of all 12 CPU threads on the Intel Core i7-980X, resulting in faster rendering of video projects.“. 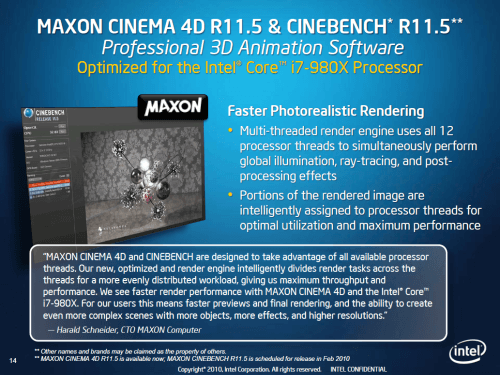 A video creation tool that can use all 12 threads? Sounds good to me. Unfortunately, we didn’t have time to test out Vegas Pro 9, namely because we didn’t have a project to use with it, but it’s something we’d like to work on given the fact that it’s truly multi-threaded. Aside from that, there’s also Maxon’s Cinebench R11.5, which is the most recent update to one of our favorite benchmarking tools.

The latest version is a vast improvement over the previous ones, as it brings global illumination and ray tracing into things (which almost assuredly will put Intel ahead of AMD in any comparison, given that Intel’s ray tracing performance is currently very tough to beat). The scoring system has also been vastly improved, and we’re back to dealing with simpler numbers. No more of these 1,000’s, but rather we’re down to dealing with single or double digits. The one benefit is that in our quick testing with the software so far, the results are highly repeatable, which makes benchmarking with it all the more enjoyable.

For games, Intel focuses on two real-time strategy titles, R.U.S.E. and Napoleon: Total War. The latter of the two is available right now, and I had hoped to test a bit with it in time for this article, but was unable. The biggest issue is that the style of game is certainly not one to my liking, so I’m more content with waiting for a game to come along that I don’t have to study up on in order to play.

But as you can see the foil below, the extra cores on a CPU can actually increase the animation detail. It’s difficult to tell the difference from two shots that already vary from one another, but the benefits explained here are going to be similar for all games that can take advantage of a CPU. With the extra cores, the physics can be offloaded, which increases performance and results in a better overall look. We do buy big GPU’s for the best graphics, so this is the way the CPU can be used to improve games in other ways. 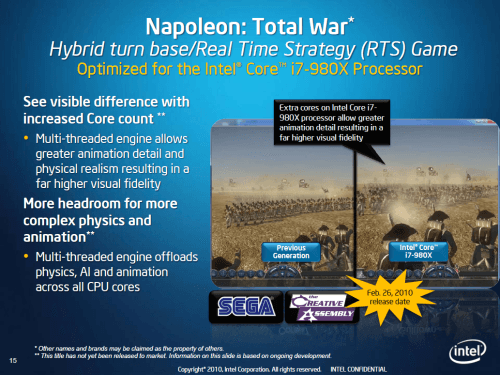 R.U.S.E. boasts some of the same benefits, but one that caught my eye was the fact that non-important features, such as horses and cows on the landscape, are animated, thanks to the CPU. Also, if you zoom far out of a scene, rather than have a flat texture applied to an object, the extra CPU cores will allow it to remain a real model, albeit a low-res version of it (which is all that’s needed, given the detail wouldn’t be seen anyway).

The overall thought to take away from this page is that the multi-threading landscape is continually improving, and more and more applications and even games are becoming multi-core aware. I still think we have a long way to go before truly multi-threaded games become commonplace, but we’re on the right track.