To help fill us all in on what makes Sandy Bridge special, Intel provided a multitude of documents to peruse, including a mammoth 95-page “master” deck, taking care of all that’s important. We’re going to be using this deck to make sure we don’t miss anything noteworthy, so prepare for lots of screenshots!

Right off the bat, I have to mention a trend that I noticed with this launch that’s not immediately noticeable. Whenever Intel hands us PDFs explaining a new architecture, it normally tackles the desktop components before the mobile. Not here. Mobile comes first, further proving that mobile computing has reached a point where, quite frankly, it’s more important than desktop computing. This of course depends on how you look at things, though.

For the past few launches, Intel has touched base on the trends of content creation and also online video consumption, and it again talked about it for this launch. According to eMarketer.com, the number of people producing their own content will rise from ~80 million in 2008 to ~115 million by 2013, putting companies like Intel in a great spot to sell its fast processors. 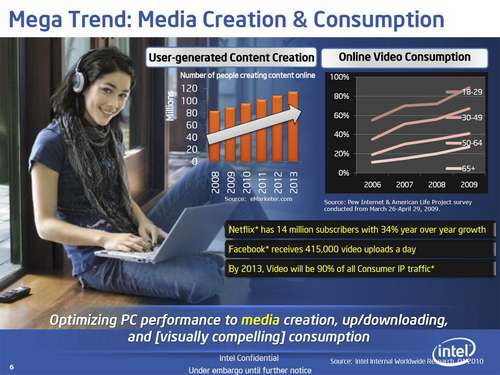 There is one scary statistic to take away from this slide. In a single day, Facebook processes 415,000 video uploads. On a similar token, it’s estimated that 90% of the bandwidth people use in 2013 will be dedicated to video traffic. This isn’t much of a surprise, given the rising popularity of downloadable movies, and also services like Netflix.

Sandy Bridge, if not already obvious, is a rather major launch by Intel. It falls into the “Tock” part of Intel’s release schedule as it’s a new microarchitecture. The next “Tick” will be the 22nm Ivy Bridge, which if all goes well, could be released in one year’s time. Just think about it… 22nm. These transistors sure are getting small! 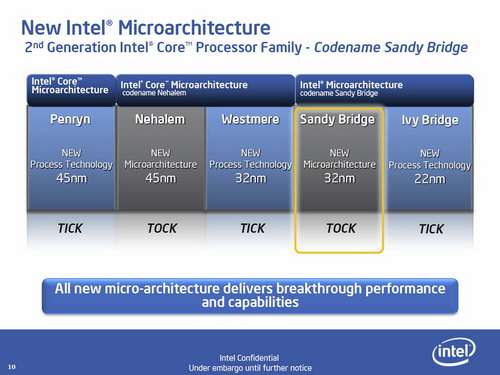 According to Intel’s roadmap, Sandy Bridge desktop processors are going to replace Clarkdale/LGA1156 offerings, and should remain through the entire year. As it usually goes, we’re sure to see speed bump products released at certain points, but nothing major will change. 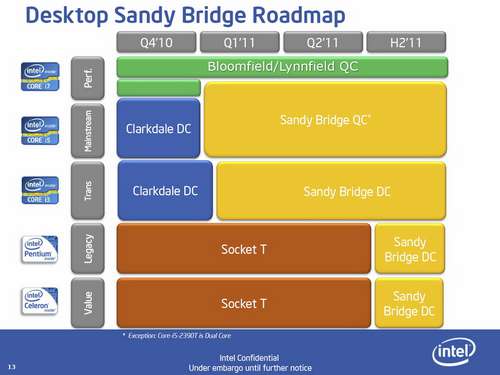 Higher-end Lynnfield/LGA1156 and Bloomfield/LGA1366 parts will remain throughout the year as well, and we might even see follow-up products there even though some portions of the architecture have been superseded by Sandy Bridge. Though not shown on the roadmap, Intel is likely to release LGA1356 six and eight-core models in the fall, which would replace current Bloomfield parts. These CPUs would differ from the rest of the Sandy Bridge line-up as they wouldn’t include an integrated GPU.

Something that’s immediately noticeable about Sandy Bridge chips is that they’re a lot longer than what we’re used to seeing, thanks entirely to the GPU that’s fused onto the left (bottom) side. Unfortunately, that portion of the die isn’t nearly as pretty as the rest, but like most things in hardware, it’s not the looks that count, but the functionality. 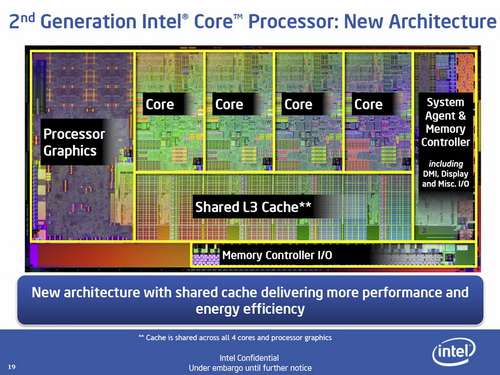 For a much larger and untouched version of the die shot, click here.

The slide above looks simple, but it’s in fact showing off some major changes introduced with Sandy Bridge. Whereas the GPU with Clarkdale had to use the cache off of the CPU in a less-than-ideal fashion, the fusion design improves cache sharing tremendously. Both the CPU and GPU are literally touching the cache in this design, so there’s not much of a bottleneck.

The other perk is that because the memory controller is based inside of this chip, rather than on a different one, the memory latencies that seemed to be sky-high with Clarkdale should be much improved with Sandy Bridge. All in all, this entire design as a whole is amazingly efficient.