On the previous page we had a basic overview of the Sandy Bridge chip, but here we’ll take a more specific look, and see what’s been brought to the table. As the slide below shows, the chip is dominated in the center with the cores and cache, and at the bottom is the graphics. At the top is the System Agent, PCIe and DMI buses, display and also the integrated memory controller. As mentioned before, the L3 cache is accessible to both the cores and GPU.

Like Clarkdale, a dual-channel memory controller is included here, so there’s still no sign of a triple-channel controller for the mainstream anytime soon. This is likely due to the fact that it’s simply not needed, because those who do require major bandwidth tend to be running large workstations and more beefier components, such as a six-core processor. The other reason could be related to costs, as the extra DIMM slots and circuitry required for triple-channel motherboards could result in needless extra costs for the average consumer. 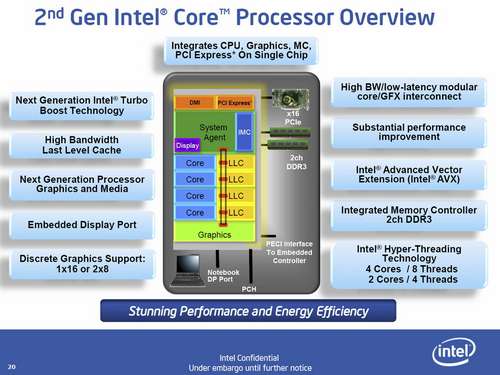 Sandy Bridge brings a couple of improvements over the Clarkdale architecture, including a more effective Turbo and also AVX instructions, which are media-focused similar to SSE4. HyperThreading has again been brought back, as has been the embedded DisplayPort functionality. The L3 cache has been renamed to “Last Level Cache”, as it now supplies more than just the CPU.

I’ve mentioned Turbo a couple of times already, so let’s finally talk about it. Like previous implementations, Turbo works on the basis of providing faster clock speeds to cores that could benefit from it. If just one core is being stressed, then it can reach huge heights, but as more cores are brought into the picture, each one gets a little bit of a boost, rather than a huge one. 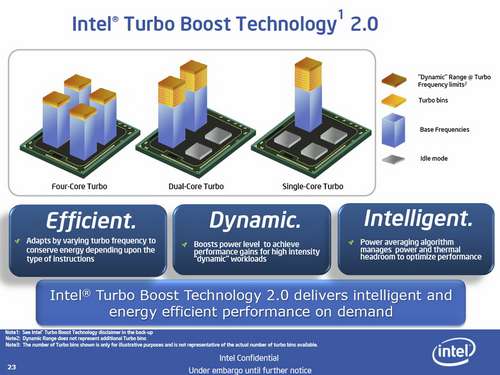 This slide might look like some of the other Turbo ones we’ve posted before, but this one brings “Dynamic” Range into things, which is an additional bin that can be executed if the IGP is not being used to a great extent. This would apply to regular desktop work, so if you are actually utilizing the GPU in any real way, that top bin wouldn’t likely spring into action.

As you might have guessed, the IGP also partakes in the Turbo functionality, running at lower frequencies while at idle, and ramping up with the need arises. 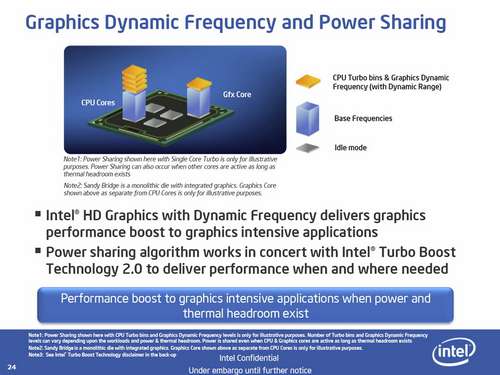 Clarkdale brought quite a nice IGP to the table, one that could handle HD tasks of all sorts, but Sandy Bridge improves things a bit further. In what the company calls “Quick Sync”, Intel has brought the preprocessing and encoding tasks to the hardware, rather than leave it up to the software. This acceleration should result in far improved performance when converting video, and because it can handle up to 1080p, its uses are huge.

But what can we expect from gaming? Unfortunately, due to time and other factors, I was unable to “sync” a lot of time into graphics testing, but it’s a priority of mine to tackle after CES is all over and done with. So far, experiences have been good, but I don’t have enough information to produce results. Instead, I’ll pass along Intel’s results: 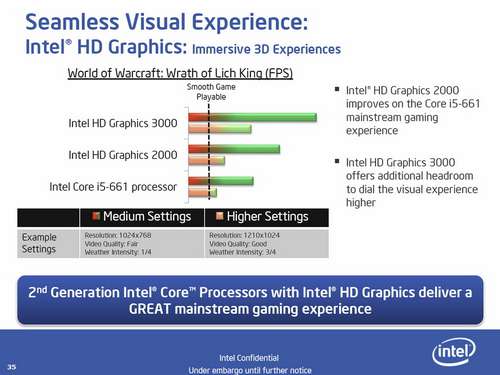 This launch introduces two different GPU models, HD Graphics 2000 and HD Graphics 3000. The former is meant to be a nice improvement over the GPU seen in the Clarkdale-built Core i5-661, while the latter aims to deliver the best possible integrated gaming experience.

Specifics aren’t given, but it’s clear that both GPUs to be bundled with Sandy Bridge processors are going to deliver a much better experience than what we’ve been used to. Of course, integrated graphics have never been nearly as impressive as even lower-end discrete solutions, but we are seeing some major strides being made here, with the HD Graphics 3000 being about 2x as fast as the GPU found in the Core i5-661.

Intel made sure that with its Clarkdale launch, many media technologies were supported, and Sandy Bridge not surprisingly improves things there as well. Introduced is encode acceleration for H.264 and MPEG 2, three post-processing enhancements and also support for HDMI 1.4. 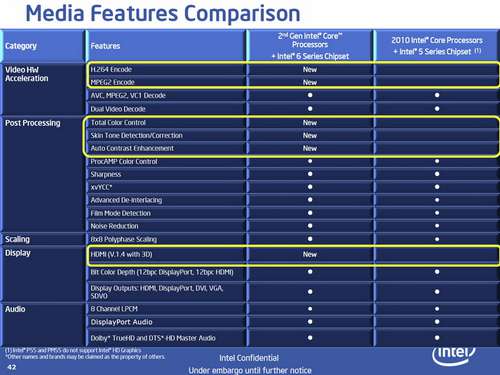 Looking deeper into the GPUs included here, the Unified Shader Architecture is of the 4th generation, and 6 or 12 execution units can be employed, depending on the model. The latest offerings deliver a dedicated math box and media processing, and also DX10.1 support. No, there’s no DX11 here, but being a lower-performance part, there’s little reason for it to exist.

The GPU core with any Clarkdale model topped out at 900MHz, but Intel increased that quite a bit, with models now ranging up to 1350MHz. Once again, the 2560×1600 resolution is supported, and with HDMI 1.4 added in, so is 3D. 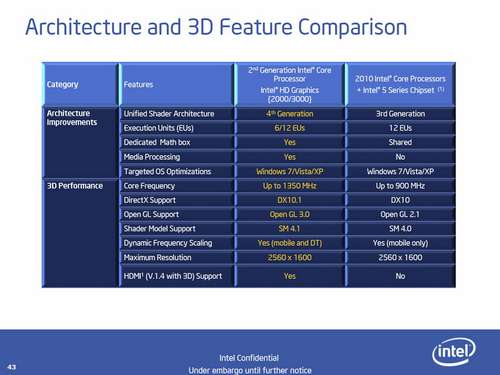 On the next page, we’ll quickly talk about some interesting desktop trends Intel has raised, UEFI, and also talk about the models that feature S, T and K suffixes.