Techgage: That’s true. There seems to be a significant buzz surrounding your headphones. What main factor do you think this can be attributed to?

James Hildebrandt: At CES we asked people what it was they found interesting about the headphones. First, the look of the headphones made them want to check them out, then as they understood how they work people said that it was one of the few real innovations they’d seen, then they said it all just made sense.

Techgage: Well speaking of, how does the technology work and how is it superior to the standard approach that has been taken to headphones for years now?

Second, they don’t really achieve the flow of sound within the ear cups. The second traditional attempt is digital signal processing (DSP) played in traditional stereo headphones. They adjust certain frequencies up or down to make them sound like they are coming from the front or rear. This is based on a bunch of science and also seems to make some sense at first.

The trouble is that everyone’s ear shape is as unique as their fingerprints, so the signal you are used to hearing to detect direction is different than everyone else. If your ears happen to match the ears that system was designed for they sound good. But most of us don’t fall in that band and those systems don’t sound natural. They are like making one size of shoes for everyone in the world. It works for some but not for most.

Psyko technology is completely different than previous attempts. There are sub-woofers at each ear, but no regular speakers. Our headphones have the speakers in the headband, or bridge, with waveguides that deliver every sound to both ears with the correct timing and volume difference for that left and right perception, and with the correct sound flow past the front and rear of YOUR ear, so it reflects off your ear and delivers the correct signal at your brain that you are used to hearing from room sounds. The result is completely natural. No DSP, so no latency. 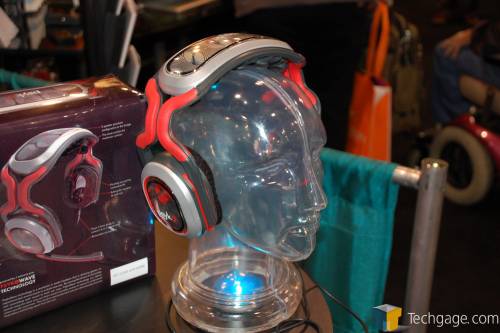 Techgage: To follow-up to that thought, the concept of surround sound immersion is nothing new and has been attempted by many companies. We have even reviewed a few of those products with mixed results. Where do you see your technology succeeding where others have failed?

We’ve had top ranked gamers, who are used to using their great 6.1 room systems, test our prototypes and get beads of sweat while playing with them because of the adrenaline: they were hearing more than they’d ever heard in their game. We’ve had others tell us they will cancel their sponsorship contracts with their headphone suppliers and out of their own pocket buy our headphones just so they can get the competitive edge Psyko delivers.

Techgage: That’s some dedication! With such an aggressive name for your company, do you see Psyko Audio branching out into other markets? Ones that are not necessarily focused toward the gaming enthusiast?

James Hildebrandt: We are really focused on the gaming enthusiast. A start-up company has to have a sharp focus and that is ours.

Techgage: How are the headphones driven? A lot of audio software seems to be an afterthought. Will there be included software or will it work straight out of the box with a compatible sound card?

James Hildebrandt: There is no software. You plug the Psyko headphones into the 5.1 analog jacks, turn on 5.1 on your computer and game, and that’s it. There is nothing to install. The computer thinks it is simply driving a room 5.1 system.

Techgage: With the current state of the economy and as many people’s disposable income decreases, what kind of market does a $300 headset have? Do you think that this economic pressure will be felt by Psyko or is this a niche enough of a product that gamers will get a pair if the performance is there?

James Hildebrandt: The economy is a factor for everyone. However, so far stats show that gaming is continuing to grow even while consumer electronics has dropped in the last few months. Gaming continues to deliver great entertainment value for the dollar. We are aiming this product at the gamers that really care about game play performance which they can get if they can hear the direction of every sound. We all pay what it takes to get good video performance because we see the difference. And once you’ve played with Psyko 5.1 and hear the direction of every sound it is hard to go back to traditional headphones or a poor room set-up.

Techgage: So what’s next?

James Hildebrandt: There is no next yet. The future is now. We’re 100% focused on delivering gamers a completely immersive experience and an edge over the competition with Psyko 5.1. That’s been our goal from the moment of conception.

Well, there you have it… a little back story to Psyko and what their focus is on in the immediate future. Whether the economy has room for a $300 set of headphones has yet to be decided, but we are looking forward to getting a set in house to test ourselves.

I have to admit, the idea sounded a lot more gimmicky than the final product turned out to be. The sound was good and if nothing else, Psyko’s approach to the headset market is new and unique, and for that, they deserve to be commended (and they were, by receiving one of our best of CES awards!). We thank Mr. Hildebrandt for his time and look forward to hearing more from Psyko in the future.