Solid State Networks was founded in Arizona back in 2005 and have their headquarters in Tempe. Solid State’s primary goal is to provide a lightweight, portable, high performance core technology based on the BitTorrent protocol for use in the next generation content delivery systems. As you can tell, this is a simple yet ambitious plan.

We are all impatient. We want the latest and greatest and we wanted it yesterday.

I recently had the honor of "sitting down" with Larry Marchman from Solid State Networks to talk about their approach to online content distribution. In the phone interview, we built upon all that I had seen while out at the GDC back in late March. There, I saw a booth with a Mac, a PC, a Nintendo DS, an XBOX and a Motorola Rokr. All of these pieces of hardware were communicating with and receiving content from a server. In real life, this server would not be local but far away yet the results would remain constant.

Solid State Networks was founded in Arizona back in 2005 and have their headquarters in Tempe. Solid State’s primary goal is to provide a "lightweight, portable, high performance core technology based on the BitTorrent protocol for use in the next generation content delivery systems." As you can tell, this is a simple yet ambitious plan.

This all may seem a bit familiar to the approach that Valve took to content distribution when they announced Steam back before the launch of Half Life 2. This is a similar to what Solid State is trying to do in idea alone. The approach is completely different and as stated earlier, based upon the BitTorrent protocol.

The way we receive content is changing everyday. Instead of going down to the local music store, we have the ability to purchase that same music online, never having to get out of the house. While this might cut into our time outdoors, it certainly is convenient. The same can be said about video. The day when we have the ability to download blockbuster films, the same day they are released in theaters, is not to far down the line. We even have the ability now to download episodes of our favorite TV shows. One such example is the ABC hit series "Lost". You can now download, via iTunes, your favorite Lost episode and watch it on your home PC, TV or iPod. While this is convenient and nice, the bandwidth needed to allow hundreds of thousands of users can sometime cripple a network. This is where the BitTorrent protocol comes into play.

We are all familiar with how BitTorrent works. Servers contain full files, know as seeders, that are available for download. BitTorrent breaks up the full file into smaller files that are easier, and faster, to distribute. Each individual will receive a separate piece of the file and eventually, many different people have many different pieces of the file. This allows everyone, in a sense, to download off of everyone, all sharing the pieces that they have until the full file is received. I know that is a basic rundown of the protocol but it gets the point across. Solid State wants to use this to do the same with online media, whether it is music, video or games.

I am going to focus mainly on the gaming content but please keep in mind that Solid State’s approach is much more versatile and can do much more than just games and software.

As stated above, this approach has been tried before with Valve’s Steam. The main goal of Solid State is to have a small footprint and consume as little system resources as possible. They also want to make the interface as easy as possible as not everyone is experienced enough to pick up the usual BitTorrent interfaces we have today.

The first partner Solid State has on board is Tulga games. Tulga is the developer of Horizons: Empire of Istaria. This is a fantasy MMORPG based on the ideas of author Peter S. Beagle. Tulga is currently working with Solid State to deliver their 1GB 14 day trial of Horizons. They are trusting Solid State with the distribution of Horizons in the hopes that it can be delivered in a speedy and secure fashion. 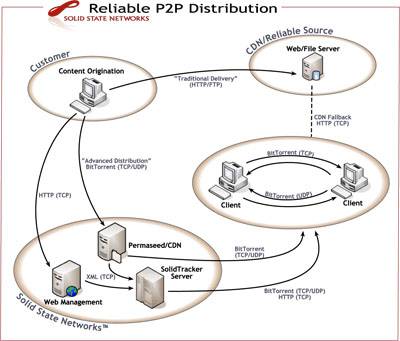 As you can see, the customer (ABC, Tulga, etc), distributes their software/files to both a file server and the Solid State Networks servers. From there, it is distributed to the end users and thanks to the use of the BitTorrent protocol; the files are spread not only from server to user but from user to user, thus speeding up the distribution. Now there will always be people that don’t want to play along for one reason or another. The can choose to decline to share the information that have and download directly from the web/file server. This is obviously slower but for the paranoid, it’s still a viable option.

Solid State was recently at the On Hollywood 2006 convention showing off their content distribution approach and while there, were awarded the On Hollywood Top Innovator Demo award. Congratulations to them for that achievement.

In conclusion, I am excited to see companies trying to advance the industry. The acceptance of broadband into people’s homes is only going to grow and with it, the demand for online content will grow with it. I like the BitTorrent approach that they are taking as well. It is said that BitTorrent traffic accounts for approximately 30% of total internet traffic. If these numbers are even close to being right, the users are out there and Solid State thinks it knows how to reach them.

I am eagerly following Solid State and the way they are attempting to take the industry. The fact that there is so much potential out there in a relatively new field is very promising in deed. I will post updates as they come in but Solid State is a company to follow closely.

I would like to thank the guys over at Solid State Networks for taking the time to talk with Techgage. I would especially like to thank Larry for taking the time to chat with you about anything and everything at the GDC. It was a busy convention and it was refreshing to be able to just talk topics other than why we were there. Hell, we even talked about long distance networking, which was for another article all together. Keep an eye on Solid State, I feel they are on their way to great things.

Discuss this article! You do not need to register in order to reply to our related thread.