ioSafe has long been building NAS boxes that can take some serious, real-world abuse. We’re talking water submersion, or something even more severe, like a house fire. What could make a solution like that even better? Synology’s DSM software on-board sure doesn’t hurt. With the 214 dual-bay option, that’s just what we’re dealing with.

Our NAS performance testing is undergoing a makeover. In the past, we have used Intel’s NASPT to gather and share performance metrics. In Rob’s review of the QNAP TS-269L, he ran into a few issues with the suite and as a result, left it out of that article. For the ReadyNAS RN102, the test is back but we have also included the large data set transfers from Rob’s QNAP article. Also back is our standard test bed.

Like the Netgear ReadyNAS RN102 we looked at just last week, this review has been a few months in the making. Like that review, I wish we could have posted our thoughts on the ioSafe 214 a little earlier, but from our testing on the latest Synology DSM firmware, I am happy with our timing. We still have a few fun NAS reviews in the works and they will go live in the coming weeks. With that out of the way, what do we think of the ioSafe 214?

Just as Brett heaped glowing yet realistic praise on the ioSafe Solo back at the end of 2009, I am about to do the same for the 214. They have taken the design lessons of the Solo, applied them to the NAS we are working with today and then armed it with what I feel is the best NAS operating system available today. We didn’t do the typical torture test. If you want that, I suggest you give Brett’s article a read. As stated earlier, he burned it, submerged it and smacked it around with a hammer. The end result being that the data contained on the drive was just as complete as it was when the testing first began. If that doesn’t do it for you, the Internet is littered with those that have done similar tests on their own. With ioSafe’s blessing, we simply tested and passed judgment on the design, performance, and bundled features of the ioSafe 214. In all three categories, the NAS was perfect. 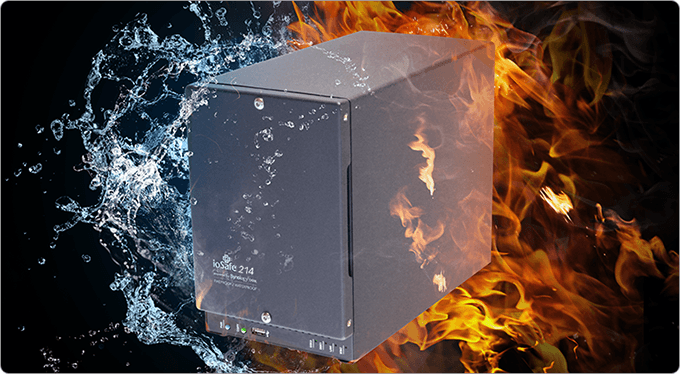 My home was broken into last spring. Since that time I have been super careful to make sure that I have multiple copies of my most important data at all times, just in case any single device is stolen. I’ve gone as far as purchasing cloud storage with Google… you might have heard about that here. Adding to my paranoia is the memory of my own home burning down as a child. I was in kindergarten when it happened but to this day, my parents talk about the things they lost, most importantly the pictures and books that were simply irreplaceable. While the medium has changed from paper to ones and zeroes, the concept remains the same. Just as my parents had pictures that they cherished, so do I. Should my home burn down in similar fashion, the multiple copies of my important data do me no good sitting within the same set of walls. While I have mitigated this somewhat by purchasing cloud storage, this option is not viable for many people. Either limited by upload speed or cost, a onetime investment into an ioSafe device like the 214 can ensure that your digital content is kept safe for years to come, regardless of whatever home disaster might befall you.

Regardless of your exact situation, if you are reading this review, you likely have some amount of important data that you would rather not lose forever. The ioSafe is not a cheap option, but peace of mind rarely is. Sold diskless for around $600 USD, it will set you back a fair amount. However, once purchased, you can then decide if additional years of protection fits into your budget. By making it so affordable, years of coverage after the expiration of the first is not only possible, but a relatively easy choice to make.

The ioSafe 214 earns a Techgage Editor’s Choice award. Despite the relatively steep cost of admission, the device is soundly designed and should keep your data safe in most any circumstance once can imagine within a home or small office. This should not be an excuse for not keeping offsite backups, but with the incredibly rich Synology DSM’s ability to setup the NAS as an accessible device over the Internet, the ioSafe 214 could not only be that offsite backup destination, but a virtually indestructible one at that. With ioSafe and Synology’s partnership, you get the absolutely best of both the hardware and software worlds, distilled down into the 214.