KDE 4 Isn’t Too Bad, After All

by Rob Williams on October 2, 2009 in Editorials & Interviews, Software

When KDE 4 was first released, I didn’t care much for it, and I thought I never would. But due to recent circumstances, I installed the latest version to see if things changed for the better, and to my surprise, they have. That might be an understatement, because as I see it, KDE 4.3 is easily one of the most polished desktop environments out there.

Page 2 – What Changed My Mind?

Before I continue, I should note that my KDE 4 installation is about as clean and “true” as they come. As I use Gentoo, I believe the resulting installation is on par with what you’d see from downloading and installing the environment using the files off the official KDE website. If you didn’t install KDE 4 manually, or use a distro such as openSUSE or Kubuntu, where it’s pre-installed, you may see a different theme than what’s available with a clean installation, and items may also be located in different locations. You may also have extra functionality that my clean installation may lack, so keep that in mind. The version I installed is the latest stable, 4.3.1.

The first thing to impress me would have been the first thing I saw… a login screen. It’s in all regards similar to what we saw in KDE 3.x, but far more modern, with a transparent panel and bright and artistic background. After logging in, I have to admit… I was rather surprised. I thought to myself, “Whoa, what happened here?”… it was fantastic. When I used KDE 4.0 and 4.1, there were a fair number of graphical glitches, especially with the taskbar. That’s not the case anymore. It’s incredibly polished.

Because I prefer darker themes, I quickly found a way to change my taskbar and other elements to a darker color, minus the window styles, which I like enough to use for a while. More can be found at sites like KDE-Look, although the selection is slim… completely unlike the hundreds of various themes available for KDE 3. Below, you can see how things looked on my system not too long after I logged in. I had to install KMix (sound mixer), and as you can see, I was preparing to install many more applications soon after. 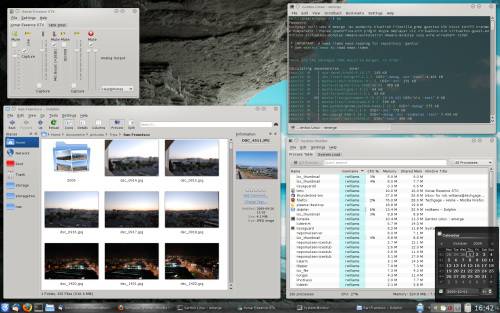 After playing around for a little bit, I found the first thing that made my jaw drop (sadly, I’m not kidding)… the ability to move your tasks around the taskbar. This is huge for me, because I have a rather strict way of doing things and I expect applications to be located in the same order I open them up. At any given time, you can look at my taskbar and expect to see these programs in this specific order: Mozilla Thunderbird, Mozilla Firefox, Bluefish, FileZilla and GIMP. Because Firefox is so prone to crashing, it screws up my entire order, and when I usually click on a specific task without even looking, that’s a problem.

Before, I’d have to close all the applications that came after Firefox, so that I could open Firefox back up, and then the remaining applications. It sounds foolish, but that’s how it is. With this functionality, however, Firefox can crash, and all I have to do is relaunch it and reposition it. This, to me, is one of the best features. For what it’s worth, Windows 7 offers the same functionality.

On the previous page, I mentioned that my one gripe about KDE 4 was the fact that everything is a widget, but I actually didn’t realize to what extent that was true. The taskbar, the quick-launch icons, the clock and anything else there, are all widgets. At first, I found that to be ridiculous, but it’s actually a remedy to one of my earlier complaints… lack of customization. If you don’t want a clock, you can easily remove it. Don’t want the quick-launch icons? You can remove it. Or, if you want to add something for convenience, you can do that too. As seen in the above shot, I put a trashcan next to the clock, since I don’t want any icons on the desktop.

I quickly began to enjoy KDE 4 the more I used it, because for the most part, the entire environment is very polished, and a pleasure to use. There are many simple animations that add to the experience. When you click on the clock, for example, the calendar pops up from its center point. When you click it again, it slides down into the bar, until you raise it again. There’s also a lot of fading as well. It seems simple, but it really does add a lot, and can’t really be considered a “bloat” feature or a feature that’s annoying.

KDE 4 doesn’t just mean a prettier face, but many upgraded applications as well. In the above shot, you can see the System Monitor, which in my opinion, is a lot better than the previous version. It’s far more clear about both CPU and memory usage, and the tasks are easier to follow. If you have a long list of processes, there’s a search and kill button to get that chore done quick. The Dolphin file manager is also a nice replacement for Konqueror. It offers a fair amount of customization, and looks great. If you don’t mind putting the time in, you’re even able to tag and add comments to various folders, so you can track them down easier later.

I have never been a real fan of indexing, but after discovering Nepomuk, I have no idea why. This indexer integrates perfectly with Dolphin, so that when you use the search field anywhere in the file manager, the related results will show very quickly. 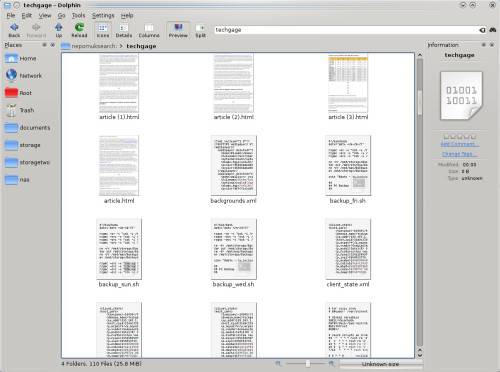 I am not sure all of what Nepomuk and it’s engine “Strigi” searches through, but as you can see, I searched for “techgage” and it found reference to it by name inside of HTML files and even some bash scripts. Although I found the indexer to work quite well, if there’s a downside, it might be that it can hog a fair amount of disk space for storing its information. I accidentally had it index way too much, and the store size was up over 3GB. That’s not much with today’s multi-hundred and even multi-thousand gigabyte hard drives, but it’s still something to look out for if you think you are missing some disk space.

Another thing to look out for is having it index while you are trying to get work done. At first, I thought that the performance of KDE 4 was severely lacking, because windows kept freezing and general performance was slow, but I realized it was completely related to the indexer doing its thing. If you are able, it’d be wise to allow it to index throughout one night and from that point forward, it will only do mini-updates unless you happen to add a huge folder for it to watch.

As a whole, KDE 4 seems to work well with all the various components, especially Dolphin. The developers changed how mundane tasks are handled, and some of the results are quite nice. Take for example copying files or a folder from one place to another. Because there’s an “Applications Notification” icon nestled in the system tray, rather than a pop-up window occur in the middle of your screen, it will pop out of the bottom right-hand corner, out of the way. It will show you the progress, and once done, you can close it. 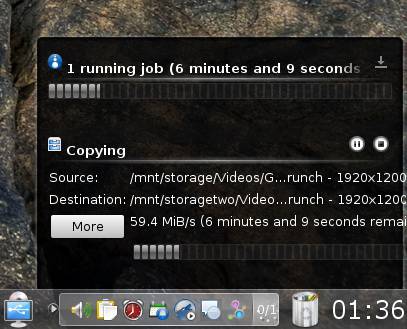 I much prefer this method to a pop-up window, but there’s a caveat. Once the process is complete, the notifier doesn’t close automatically, and I can’t seem to find an option to change that. If you have a whack of progress bars open at one time, and each is completed, closing one will close them all, which makes sense.

On the next page, I’ll wrap up my lovefest for KDE 4, and add in some thoughts on what I’d like to see taken care of in future version updates.