KDE 4 Isn’t Too Bad, After All

by Rob Williams on October 2, 2009 in Editorials & Interviews, Software

When KDE 4 was first released, I didn’t care much for it, and I thought I never would. But due to recent circumstances, I installed the latest version to see if things changed for the better, and to my surprise, they have. That might be an understatement, because as I see it, KDE 4.3 is easily one of the most polished desktop environments out there.

I admit that despite using a distro like Gentoo, I can be a lazy sysadmin more often than not. If I run into a complex problem, I might choose to not fix it, simply because the amount of time it takes to figure out a solution wouldn’t deliver a worthwhile enough reward. Take the Linux sound system, for example. I have always used ALSA for various reasons, but mainly because it supports new audio cards, such as the ASUS Xonar. I have a simple audio card setup… two cards in total, one for the speakers, the other for headphones.

Without robust tools built into KDE (some distros supply their own such tools), changing your default audio card can be a true hassle. On some boots, my HDA Intel would be the default card, while on others, the Xonar would be. This is obviously a pain, because if I want to listen to anything through the opposite source, it means I better be planning to use an application that allows me to pick and choose my output.

Poking around in the “System Settings” (AKA: Control Panel), my jaw dropped once again. Under the sound and video configuration, there it was… the ability to pick and choose which audio card to use for which purpose. Yeah yeah, this sounds so boring for most, because if you are using a pre-built distro or any other OS, this is common-sense. But when you build your distro from scratch, features like these really come in handy. From what I’m aware, GNOME has always such functionality for a while, so it’s nice to finally see it in KDE. 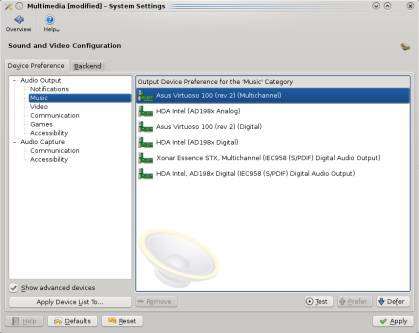 When many users of Linux try to push the OS on their friends, a popular feature to fall back on is fancy desktop effects. As far as I’m aware, Linux offers far more desktop eye-candy than any other out there. To have some really cool desktop effects in the past, you had to install Compiz packages and fiddle around until it worked, but with KDE 4, a lot of what people liked with Compiz is actually built right in. This came as a big surprise to me, because I had no idea until I stumbled on it in some menu.

What kind of effects am I talking about? How about the CoverSwitch (a la Cover Flow) feature? If enabled, it replaces your alt-tab functionality by putting all your active applications into a 3D environment so you can essentially flick through them. This might seem a little overkill for a simple alt-tab, but it’s actually extremely useful. It’s far easier to spot a window you need fast by actually seeing the window rather than a small thumbnail or application icon. 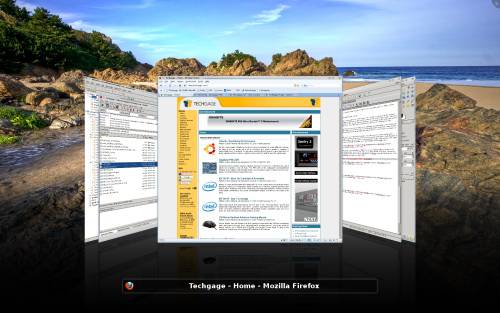 Not all special eye candy features are particularly useful, but they’re cool nonetheless. One such example would be the Lava Lamp window feature. When minimized, the window shrinks down into the taskbar, and vice versa if you restore it. Other features include exploding windows when you close them, wobbly windows, and if you are particularly festive, you can turn your desktop into a snowy paradise. 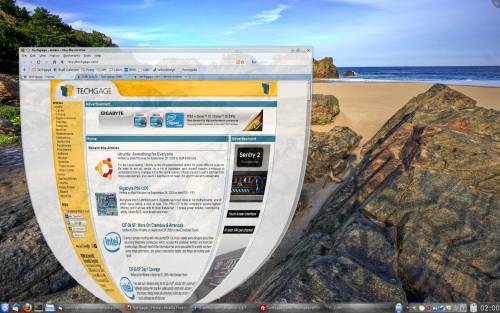 When I tested out Compiz in the past, one of the main reasons I didn’t like it was because it was unstable. My most common memory of this is a desktop turned black. The KDE developers wouldn’t have decided to include these features now if they were unstable, and in all my tests (and I’ve been playing around with them a lot), I didn’t have a single instability, or even a sign that it might be unstable. I’m actually incredibly impressed by how stable this OpenGL-accelerated environment is. I was running a copy of Nexuiz windowed, and put a transparent console in front of it, there were no graphic anomalies at all. Throughout all my tests, I can’t help but be amazed by just how stable it is. Normally with advanced technologies like this, there’s usually some major downsides, but I sure haven’t found any yet. 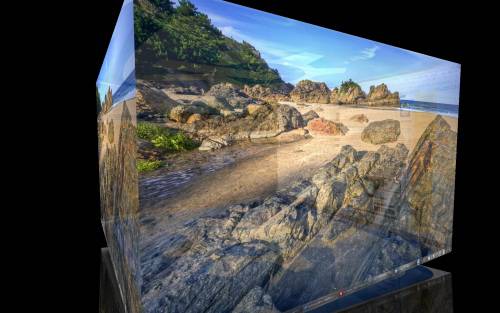 Of course, I can’t talk about these desktop effects without mentioning one of the most popular out there… the 3D desktop cube. I don’t use multiple desktops, but if I did, I would use this feature like there was no tomorrow. Essentially, each desktop is on one side of the cube, and you can escape your current desktop, spin it around and go to whichever one you want active. Given there are much simpler ways to go from one desktop to the next, this is entirely for eye candy purposes, but boy, it pulls that off well.

When I began writing this article, I meant it to be a thousand word editorial, but as I began writing, I couldn’t help but get excited all over again about the features I was goofing around with, and the other pluses that KDE 4 has over KDE 3. Despite this “editorial” ending up far longer than I anticipated, I can’t help but feel like I’ve only scratched the surface. I’m fairly confident that I covered all I wanted to. One thing is for certain, though… there’s much more to be had than what I’ve mentioned.

If there’s one thing that I’m impressed by, it’s the fact that my attitude towards KDE 4 changed so fast. One day, I disliked it quite heavily, and the next, I kick myself for not upgrading sooner. Have I gone soft? I’m doubtful of that, but I am certain that KDE 4.3 is a vast improvement over the KDE 4.0 I used almost two years ago. That’s not to say that I like everything about it, but everything I love far outweighs what I don’t, and at this point, I couldn’t imagine backtracking to KDE 3.x.

I mentioned earlier that Amarok 2 was another “upgrade” I didn’t much appreciate, but even that seems to have been improved over time. I don’t consider it perfect (it’s missing album art I had, and it won’t even use the album art built into music from iTunes), but there’s actually a lot I appreciate over Amarok 1.x, such as less focus on file information and useless statistics, and more on the music itself. At any given time, you can usually access the lyrics to the music you are listening to, and also a Wikipedia article. It’s convenient, and streamlined. I do find that the new Amarok lacks a LOT of options it should have, or that the older version had, but I can’t complain too much. 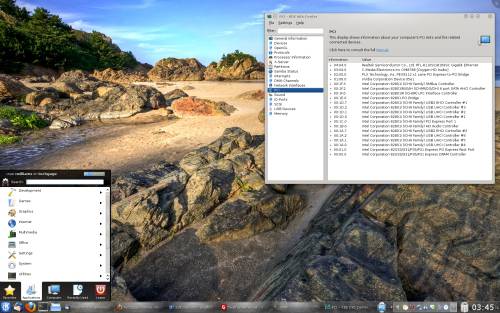 Amarok isn’t the only application to be updated from KDE 3.5, but it’s one that I use most often. Other updated apps that I use quite often include Konsole and KAlarm, and there may be more that I haven’t noticed yet.

Before writing all this, I thought I had more complaints than I seem to have now, but there are a few minor things I’d love to see changed. For one, it should be far easier to edit the K Menu. The reason I thought it was impossible to create keyboard shortcuts to launch applications with KDE 4.0 is because I had no idea the only place to edit it was by right-clicking the actual K and selecting it there. In KDE 3.5, you could right-click pretty much anywhere and have the option become available. Simple and common-sense functionality like this shouldn’t be changed.

One great feature of Dolphin is the ability to select more than one file scattered around a folder without holding down the Ctrl button. You simply hover over a file, click the plus sign and repeat that for each file you want. While I think this is a huge improvement over holding down the Ctrl button, I think it’d be great if clicking a file or outside a file after files are selected like that would still retain your selections. It would be convenient to select each file one at a time, and be able to regularly click on files as you go to check them out, then go back to continue selecting the individual files you want.

Those two things are all I can complain about at this point, because the truth is, I’m simply glad I finally made the move and realized that KDE 4 has improved so much since its launch. No desktop environment is perfect, but compared to KDE 3.5, there are a slew of improvements in the latest version that warrant an upgrade. It’s not only better-looking, but far more of a pleasure to use as well… and if you use your PC as much as I do, that’s rather important.

Have you used KDE 4? What did you think of it? Want to flame me for slightly incorrect information? Have your own thoughts of what you’d like to see in KDE 4’s upcoming versions? Hit up the forum thread below!