PC hardware vendors are constantly expanding into markets they traditionally have never had a presence in. Kingston, known for its memory and storage solutions, is the latest one; its HyperX Cloud gaming headset is its first venture into the world of gaming audio. Will the Cloud bring rain on this parade, or will it shine through like a ray of sunshine?

If you’re a regular Techgage reader (and if you’re not, why aren’t you?), then Kingston is a name you’d remember, I’m sure. The company has been a leader in computer memory and solid state storage solutions for years. Now, though, it’s expanding into hitherto unexplored territory.

With its all-new HyperX Cloud, Kingston is venturing into the world of gaming audio. It’s an interesting move, given just how crowded the market is. It’s also a very tough challenge to break into this market, and Kingston’s best chance of success is to make a great first impression.

It’s a bit of a privilege, really, to have the task of reviewing the HyperX Cloud given that it’s Kingston’s first product in a whole new arena. For sure, though, Techgage will subject this headset to the same conditions as every other headset we review.

With that preamble out of the way, let’s have a look at Kingston’s newest baby. 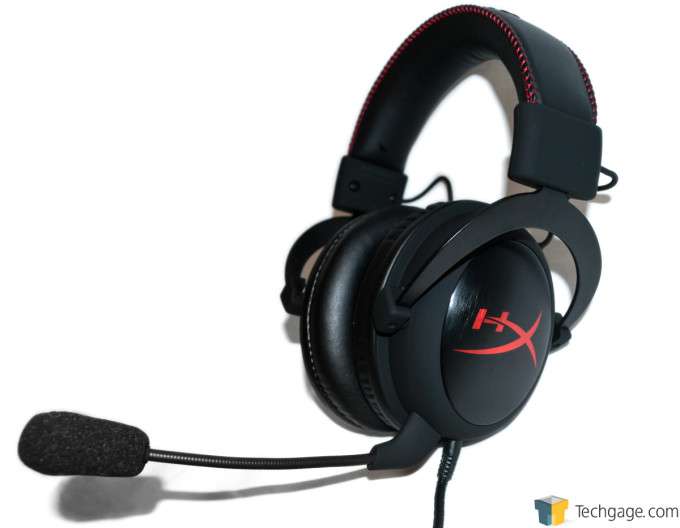 Here is the HyperX Cloud in its black and red glory

I like the mix of classical looks and modern aggressive sensibility. The chosen color scheme of black with red accents may be a bit of a cliché when it comes to evoking a feeling of aggression, but Kingston’s execution is superb. Part of the reason why is the matte black is not monochromatic; there are actually different “shades” of the black because of the variety of materials. For example, the black on the earcup’s leather interior lining is different from the black on the earcups’ exterior surface, which looks like brushed metal. It’s a pleasing effect, subtle yet easy to appreciate. Meanwhile, the red stitching on the headband accentuates the feeling that this is a high-quality piece of kit; it suggests that the Cloud is hand-built, like the leather interior in an expensive supercar. 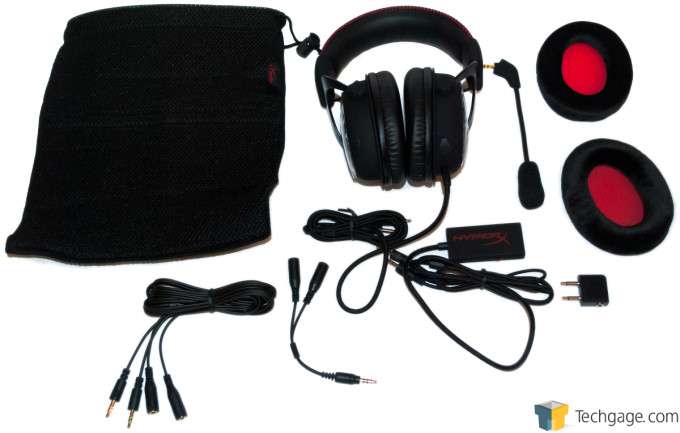 Kingston certainly spared no expense in providing everything you’ll need to use your new HyperX Cloud. The company packed all of this into the package. You’ll get the headset unit itself, the detachable mic boom, an optional cable with in-line controls, a cable extender, an airplane jack adapter, and a two-into-one cable that would transform the HyperX Cloud into a smart phone-compatible headset. But there’s more. Kingston has also packed a set of spare earcup liners (made of a suede-like material similar to that used by Beyerdynamic, for example) as well as a travel bag for your HyperX Cloud. This is certainly one of the most comprehensive product packages I have ever seen for a headset. 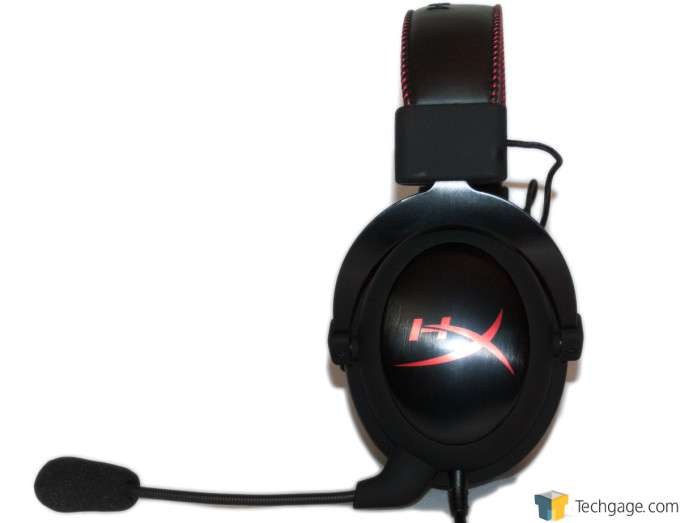 This profile shot shows off the HyperX Cloud’s elegant, classical looks mixed with that hint of aggression. The oval earcups look like relics from a studio from the middle of the last century, but are constructed and detailed with modern materials. The red HyperX logo, though, is an unmistakable sign that this is a product of the second decade of the 21st century. 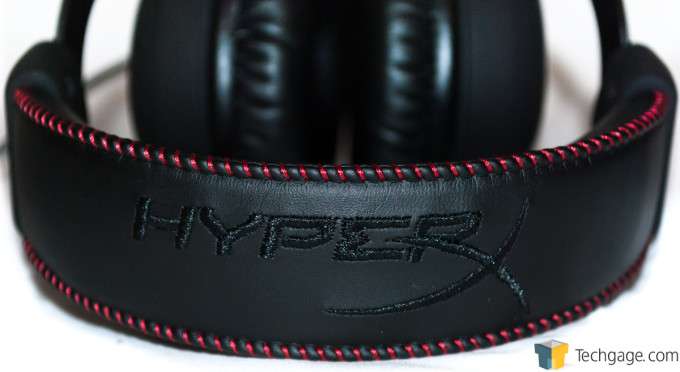 Kingston certainly spared no effort in the HyperX Cloud’s build quality. Check out the quality of the stitching on the leather headband. The color of the red thread matches the red HyperX logos on the earcups. The HyperX logo’s stitching in black on the top of the headband is also superb. The effect of details like these is that it makes you think human hands (rather than robots) made at least this part of the product. To me, that is hugely impressive. 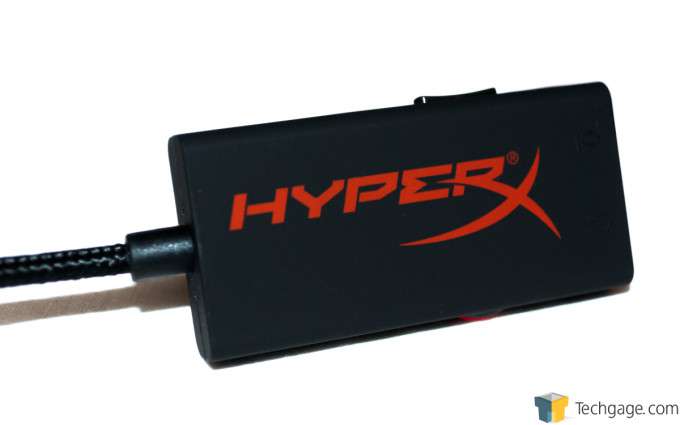 The HyperX Cloud, as we’ve seen, has a ton of added accessories, but perhaps the most interesting of these is the extender cable with an inline control pod. The control pod is fairly simple. There are two buttons (play and mic mute) and a volume control wheel on the side. The cable to which it is attached is about two and a half feet long. 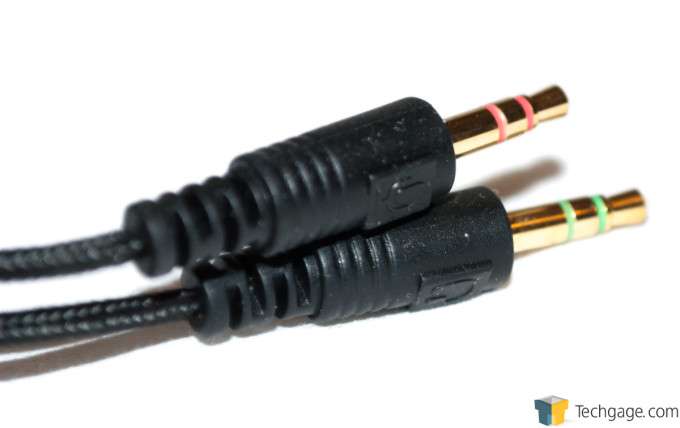 Speaking of cables, every single one in the HyperX Cloud package (all the extenders/adapters, as well as the one on the headset unit itself) is sheathed in a high-quality and flexible braided sleeve. The cable from the headset unit terminates in two connectors; per usual, the one with the pink rings is for the mic-in, while the one with the lime green rings is for the audio-out. The plug ends, incidentally, also have tiny mic and headphone icons on them too, in case it’s hard for you to see the rings on the connectors. Also, the back end of the control pod-equipped cable extender has jacks that have the appropriate coloration on them. 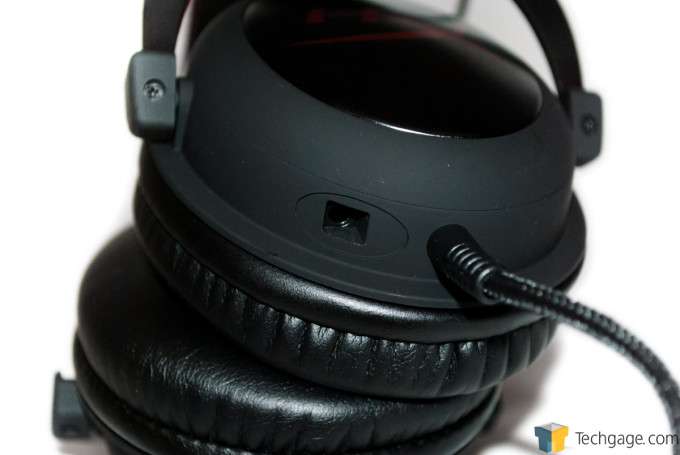 Here is a close-up of the mic jack on the left ear cup. A rubber (or is it silicone? I can’t tell) plug covers up the jack if you want to use the HyperX Cloud as plain headphones. The mic boom, as mentioned before, is detachable.

Now that we’ve had our visual tour of the Kingston HyperX Cloud, let’s move on to performance testing, after which we’ll have some final thoughts.