by Robert Tanner on February 5, 2013 in Storage

Looking for an affordable SSD but demand a high-performance controller? Kingston’s SSDNow V300 is shaping up to be just that. Powered by a SandForce SF-2281 controller and paired with Toshiba’s 19nm Toggle-based NAND, it’s an aggressive entrant for its price-point. Let’s check it out.

Note: Since the publication of this review, Kingston has changed the NAND used in the V300, rendering our results inaccurate. Please refer here for more information.

Kingston is no stranger to SSDs; in fact, over the last five years the company has offered the most diverse repertoire of drives available. Specifically, it’s utilized one or more generations of controllers from Toshiba, Marvell, JMicron, Samsung, and even SandForce, with its high-performance HyperX SSD series. To add to that list, it also has the unique distinction of being the only company ever authorized to sell SSDs with Intel controllers inside. With such a history behind it, it should be clear that Kingston isn’t just another name floating around the SSD market; rather, it’s one of the major players.

To start off  the New Year, the company has ushered out a new line of budget SSDs, called SSDNow V300 – but there is something different about this one. It’s been a little over a year since Kingston introduced its flagship HyperX brand to the SSD market using the well-known LSI SandForce SF-2281 controllers – what’s new, is that the same controller can now be found inside this value-branded V300 offering as well.

The SSDNow V300 offers all the same SF-2281 features one has come to expect, including SATA 6Gbps (3.0) support and high performance with compressible data, although with the usual Kingston extras such as tweaked SandForce firmware, the use of thermal pads on drive components, and a three-year warranty. Actually, the only real distinction between the HyperX and the V300 is the NAND itself. To produce a budget-friendly SSD Kingston is pairing the V300 with newly-launched 19nm Toshiba Toggle NAND. Out of the three common varieties of NAND, Toggle-based NAND is the best type for performance, so our test results may prove interesting. 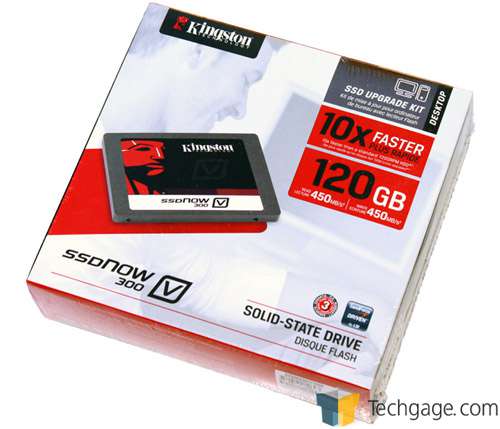 The SSDNow V300 is available by itself and in desktop and laptop upgrade kits. The desktop kit includes the usual 3.5” brackets, data and power cables, a disc containing Acronis True Image cloning software and an installation video. The laptop kit differs in that it features a small pocket-sized USB enclosure that the SSD slips inside for easy transport and portable use as an external USB drive. The laptop kit replaces the desktop bracket for a 7mm to 9.5mm adapter, as the V300 follows the current trend toward the 7mm form factor. 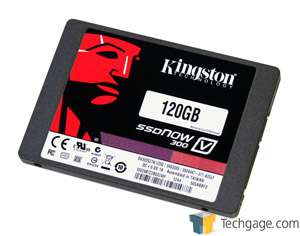 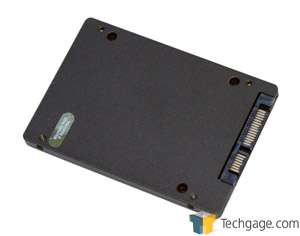 The performance numbers are a little peculiar given that the smallest SSD offers the highest IOPS rating, but even if the ratings were accidentally reversed in the spec sheet, the differences are minor. The results are also highly generalized, but we have listed what is included in the datasheet. Performance should instead be closer toward the listed specs with the larger capacity models, especially given this is what the reference PCMark Vantage numbers would indicate.

Something else worth pointing out are the endurance figures. While SandForce controllers rely on data compression to achieve top performance, this has a beneficial side effect of minimizing the writes to the NAND and thereby increasing the actual endurance rating. The 128GB OCZ Vector may have a five-year warranty for example, but interestingly Kingston rates the smaller 60GB V300 SSD with a nearly equivalent minimum write rating (32TB vs 36.5TB). With 64TB and 128TB ratings for the larger capacity SSDs, it’s most likely one will be replacing their SSD to a SATA Express-capable drive before it ever has a chance to wear out. If that wasn’t enough, these are not even finite lifespan limits, just the bare minimum of writes the NAND is expected to perform reliably – the SSDs should last even longer.