This past November, I took Kingston’s first-ever USB 3.0 device for a spin; the DataTraveler Ultimate 3.0. Given the fast speeds it offered, ‘Ultimate’ seemed like an appropriate name, and when all said and done, the drive impressed me enough to earn itself one of our Editor’s Choice awards.

At the time of that review, USB 3.0 devices still felt like they were in their infancy. The companies to produce them were few, and as time went on, we saw companies tweaking their respective devices to make them faster or more attractive in general. Like most other technologies, it’s hard to expect refinement from the get-go.

While the flash chips found inside thumb drives and similar devices are the most important factor for fast performance, the built-in USB 3.0 chipset and firmware also has a lot to do with things. As we’ve seen from other companies, simply upgrading the USB 3.0 chipset from one model to another can improve the performance seen from using exact same NAND. So, it’s without surprise that companies such as Kingston actively seek out better options to make sure their products are as good as can be.

That scenario is how the ‘G2’ drive we’re taking a look at here came to be. It’s identical in aesthetic design, but has the G2 added to its name as it’s in fact a second-generation drive. As far as I’m aware, the flash chips are no different, but the controller or firmware is, optimized for throughput rather than higher IOPS. 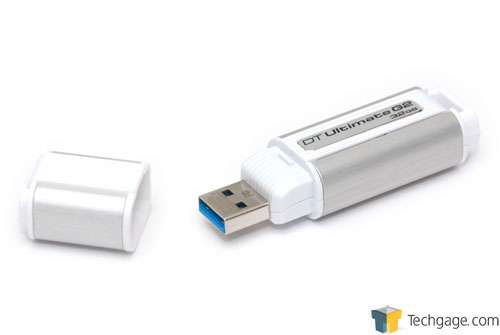 The original Ultimate 3.0 drive supported speeds of 80MB/s read and 60MB/s write, while this G2 version bumps these values to 100MB/s read and 70MB/s write – a healthy gain. Since the original launch, pricing has also changed, as expected. Last November, the 32GB model retailed for $138 USD, while the current-gen G2 drive carries an SRP of $116 (it’s $80 at one popular e-tailer).

As the photo above shows, the Ultimate 3.0 isn’t as small as most other thumb drives out there, which the photo below explains even better. Still, it’s not what I’d call a ‘large’ drive, and given the major performance gains seen compared to a USB 2.0 one, the extra bulk can be easily overlooked. 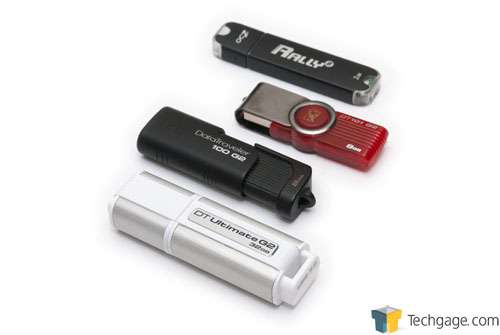 It’s hard to write more about a thumb drive than has already been written, so let’s get right into our test results to see where the G2 drive both stands with the G1, and also other recently-reviewed thumb drives.