It is with great pleasure that we are now reviewing the Kingston HyperX SSD. Kingston has for several years offered one of the most expansive lineups in SSDs by utilizing controllers from almost every manufacturer – with one sole, notable exception: SandForce.

The HyperX branding is Kingston’s enthusiast grade memory brand, but it now also signifies Kingston’s enthusiast SSD offering. In the past we have generally found Kingston’s SSDs to be quite favorable, in particular the value-friendly offerings that utilized Toshiba controllers, so it is great to see the company now stepping in to the enthusiast market. More competition in the SSD market from a reputable technology company is always a good thing.

When it comes to SSDs, SandForce literally has become a household name and it isn’t hard to see why. While the first generation of SF-1200 drives delivered very good performance, the second generation SF-2200 controller simply dominates the market with read performance capable of exceeding 500MB/s in some usage scenarios, with writes and heavy I/O equally well-covered. The HyperX is Kingston’s first SSD to utilize a SandForce controller, and as one might expect it is the SF-2281. 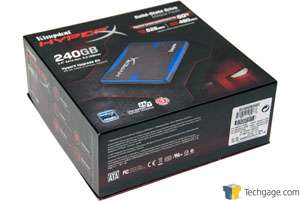 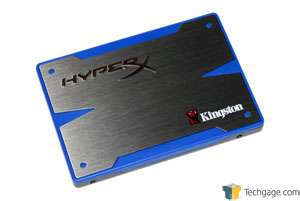 It’s never a good idea to judge an SSD by its cover, but in this case the HyperX is already shaping up to be a nice SSD. It’s a welcome departure from the usual matte gray or black plastic housings found on other drives, but it goes beyond just the aesthetics. Out of the dozens of SSDs we have handled this one actually has heft; it feels solid. We’ll mention why further down. Unlike a very well-known competitor we could mention, there isn’t any cheap-form plastic not fully seated to the housing to be found.

There has been a wave of new SandForce-powered SSDs over the past few weeks, and ordinarily while any SandForce controller is like any other, the NAND they are paired with is another matter entirely and does affect performance. To keep things simple and straight-forward when attempting to compare SSDs to one another, SandForce SSDs typically can be split into one of these three categories: Value, Performance, and Extreme.

Value SF-2281 drives will use lower cost (and slightly lower performing) asynchronous NAND, while Performance drives will go with synchronous NAND. Extreme variants will utilize a Toggle-based NAND setup to eke out every edge in performance, but will be priced accordingly. To date I’m only aware of three “Extreme” models that exist (Vertex 3 Max IOPS, Patriot WildFire), so obviously most SF-2281 drives will fall into either the Value or Performance label.

All of that said, the Kingston HyperX 240GB SSD we are reviewing fits squarely in the Performance category. Under the hood it is packing 25nm IMFT synchronous NAND (correction: it’s in fact Intel 25nm Compute NAND) mounted on a custom PCB design. However, that is not all. Out of all the SSD’s we have seen Kingston is the first and only company to include thermal pads in its HyperX SSDs. Although they are not required, it is great to see a company taking extra care in the design of its products. (Of course, attempting to open the drive invalidates the warranty, and in this case, also requires a special hollow/security hex driver). Kingston offers a full three year warranty on the HyperX SSD family. 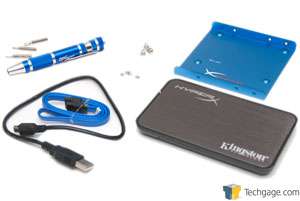 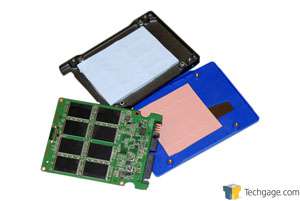 Kingston includes quite a few extras in the upgrade bundle kit. There is a single-piece 2.5″-3.5″ bay adapter, a USB 2.0 enclosure for converting any SSD into a mobile flash drive of sorts (included mostly for the sake of transferring your OS to the SSD), SATA & USB cables, screws, and lastly an aluminum screwdriver “pen” with changeable magnetic tips.

Also on the CD (not pictured) is a copy of Acronis’ migration software. Given the SSD in question this is bundled with we would like to see a USB 3.0 capable enclosure. Also we would prefer that the SATA cable was actually rated for SATA 6Gbps and was of the latching variety. Overall the package includes some good extras, but these changes would make the upgrade kit significantly better and more appropriate given the extreme performance the Kingston HyperX SSDs can deliver.