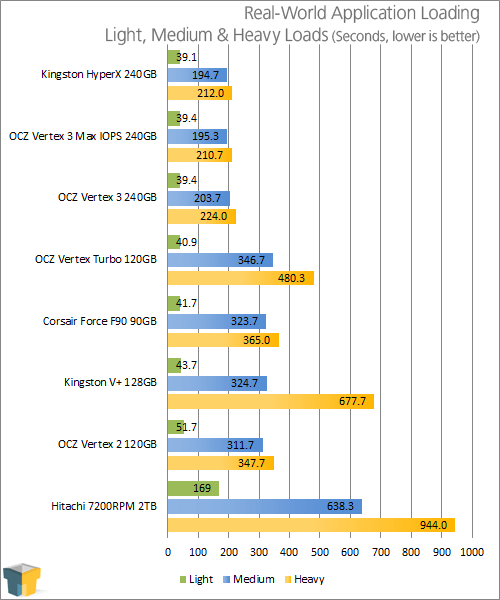 So after a few lengthy paragraphs and just a single large graph, how does the HyperX perform? Well from the press of the case power switch to the very last image loading into Photoshop CS5, the HyperX sets a new light batch test record of 39.1 seconds. In other words, the HyperX can load Windows 7, images in Photoshop, documents in Word, Excel, and Powerpoint, and still have the browser open to your favorite webpages and your music playing within a mere 39 seconds.

If that all sounds like child’s play, well that’s because it is for an SSD. The real work begins with the medium batch test. Once again the HyperX delivers a new quickest time in our test, just edging out the V3MI. At 3:14 the time to complete our medium batch test is just astonishing. By comparison, a first-gen SandForce SSD required an additional two minutes! The hard drive required a total time of well over ten minutes, over three times as long as the Kingston HyperX.

Things get even more interesting with the heavy batch test. Remember results are directly comparable to the medium batch times as only a background anti-virus scan was added to the workload. The HyperX is just edged out by two seconds here, but remember that the V3MI is supposed to be using faster toggle NAND. The HyperX does not disappoint and delivers a heavy batch time twelve seconds quicker than its true competitor, the V3.

To try and put that in perspective, the HyperX only required an additional 18 seconds to complete a full anti-virus scan of 5GB spread across 19,748 program files, while it was busy running the medium batch test in the background. One thing is for sure, there is no longer any excuse for not having anti-virus installed!

For those curious how the first-gen SF-1200 powered V2 stacks up against the second-generation SF-2281 powering the Kingston HyperX, the HyperX works out to be 60% faster in the medium test and a full 64% quicker in our heavy test. Where the HyperX required a time of 3:32 to complete the heavy batch test, the 2TB hard drive required well over fifteen minutes to complete the same task.