The HyperX’s performance credentials are undisputable. Whether you are a first time SSD buyer or looking to upgrade an early model SSD, it is pretty clear that the Kingston HyperX ranks amongst the top elite SSDs on the market today. In the majority of our tests it outperformed its nearest rival, and several times even challenged or exceeded the performance we have seen from a rival toggle-based NAND SSD.

Prices on SSDs tend to fluctuate weekly even before factoring in weekly retailer sales and mail-in rebates. Still, as of this writing the Kingston HyperX 120GB is slotting in at a respectable $245 ($215 AMIR) for just the bare drive, while the SSD upgrade kit pulls in at $265 ($235 AMIR). Whether the kit is worth the $20 difference will depend on your specific needs, but with the rebates taken into consideration the HyperX offers solid pricing either way.

That brings us to the only dark horse in the room, the nebulous BSoD issues SandForce SSDs have been suffering from. The problem affects a disproportionately small number of users, but those that do run into problems are understandably not happy. The issues are rather hit and miss, with any and all manner of factors apparently in play with seemingly random combination required to cause problems. Probably the strangest is that at least for one case simply swapping the PSU made the problem go away. 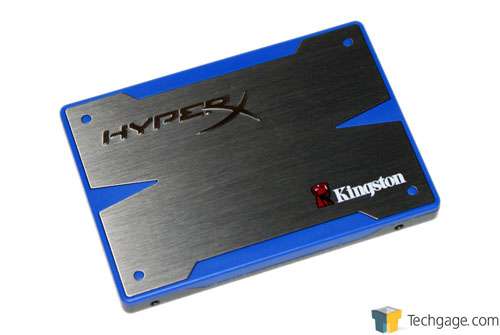 Kingston is one of the most recent manufacturers to have just now launched a SF-2281 SSD, and Kingston states that they have spent this time rigorously testing the HyperX SSD design specifically to weed out any such issues. As we mentioned before Kingston (as with many others) utilizes a custom PCB of its own design, and the company is confident enough in the HyperX to release it despite the ongoing consumer issue other manufacturers utilizing SF-2281 SSDs are having to endure.

Incidentally as we were conducting the review Kingston had even released the KC100 SandForce part for business and enterprise customers featuring a full five year warranty. It’s hard to get more confident in an SSD than that! While we cannot make the claim that a chance doesn’t exist for users to run into an issue, the chance is small enough that we have no qualms recommending (and personally adopting) SandForce SSDs in our own systems.

The most interesting detail about the HyperX’s spec sheet (besides the rather extensive list of OS’s and service packs tested) would have to be the mention of 5K P/E cycles. I’m not aware of any manufacturers that list the program/erase cycles for their SSDs, so to see Kingston listing it must mean it is very confident in the lifespan of its HyperX SSDs. A P/E ratio of 5,000 is the best rating Intel’s 25nm NAND can achieve, and it is great to see a manufacturer like Kingston willing to include such data in the product specs.

I know this conclusion is getting lengthy, but we would be doing our readers a disservice to not cover all the bases. Before considering any SF-2281 drive, potential buyers need to make sure they have a native SATA 6Gb/s port to take advantage of the full speed of the drive. Marvell’s SATA 6Gb/s ports should be avoided altogether due to performance issues, as well. If this means only SATA 3Gb/s ports are available, then less expensive SSDs are a better option.

Now that all the angles have been covered, it is pretty clear Kingston has endeavored to create not just another boutique SSD, but an SSD the company can stand solidly behind. Just handling the HyperX and opening it up revealed Kingston has put some careful thought into the design, but the impressive performance is really what cinches the deal. The HyperX is certainly not the lowest cost synchronous NAND SF-2281 SSD on the market, yet it performs on par with the even more expensive toggle-based NAND SSD in our testing.

With that in mind, and the quality of the SSD itself, we have no trouble awarding Kingston’s 240GB HyperX SSD our Editor’s Choice award. Kingston may have been one of the last to market with a SF-2281 SSD of its own, but it made sure to launch with a solid offering when creating this drive.

(For those wondering, the HyperX was using the SandForce 320ABBF0 firmware revision for this review.)