These modules are from their HyperX line which tells us their are designed for gamers and overclockers. Of course, PC2-8000 speeds are nothing you would likely throw into your moms PC, so we can expect some great performance here. They are equipped with 5-5-5-15 timings which are not tight, but not surprising either. The majority of DDR2-1000 modules include these timings, although most that I have personally tested will do 4-4-4 reliably with a pinch of extra voltage.

I am not positive of the chips uses in these modules, but it would not be a far stretch to assume that they are Micron D9GMH. Most new enthusiast modules use either GMH or GKX, but considering GKX is much more expensive, it’s shunned. GMH proves to be a huge hit though, and it’s evident since it’s been used in kits ranging from PC2-6400 all the way up to PC2-9000. 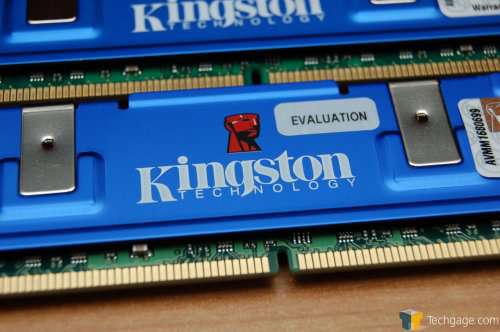 Speaking of OC’ing success… here are all of the tested settings I used:

As you can probably tell, I don’t touch tRC until later on in testing.. usually only the final overclock. It doesn’t usually make a huge difference in performance regardless, but for a top overclock it’s nice seeing the smallest possible numbers. Though some DDR2 kits have a rough time with low tRAS at high frequencies, that was not the case here. We had a smooth four of a kind here, although it required some juicy 2.65vdimm.

You may ask if it’s safe to even use that much voltage to begin with. Yes, and no. It depends on the chips really, but these ones had no problem whatsoever. I always keep a 120mm fan pointed straight at the modules, so they did not get as hot as they would otherwise. In fact, I didn’t find it to be an issue at all, and I wouldn’t have a problem pumping even more voltage into them. However, that’s getting a tad ridiculous since I would be focusing on tighter timings as opposed to higher frequencies. It’s just not worth it to pump that much voltage into the modules for minor gains that tighter timings bring.

That said, DDR2-1100 4-4-4 with 2.65v was 100% stable throughout all of the tests, and this includes 3D stable. I played Half-Life 2 for an hour without a single hitch… so obviously these modules have some major overclocking appeal.

I will be pairing the Kingston against the recently reviewed OCZ 7200 EPP, which has proved to be one of my favorite kits this year so far.