For this test we took a 7.16Gb Dual-layer DVD image and timed how long was required to transfer it to a different 10GB partition created on the same drive. Keep in mind with a hard disk, this requires the actuator arm to seek back and forth between the source and destination sectors of the disk platter, while any SSD can instantly read and write to multiple flash chips at once. 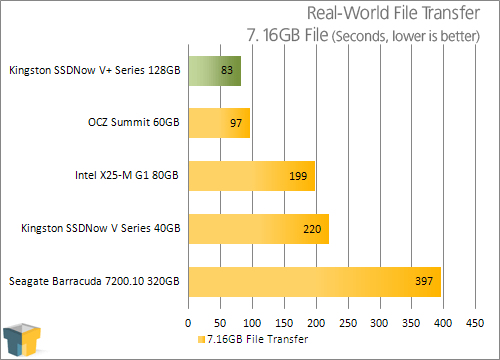 Here the results were mind-blowingly quick with just a minute and 23 seconds required to transfer the entire file! Only the Summit is similarly optimized for sequential file writes but even it cannot offer as high the throughput as the Toshiba controller is able to manage here.

This test is perhaps the most important in our battery of benchmarks as it gives real-world results. It is designed to simulate three kinds of multi-tasking scenarios in order to see how well the storage drive can cope with concurrent workloads. The better a drive performs here, the quicker and more responsive it will make the computer seem during normal everyday usage. It shouldn’t need to be said that this is where SSDs shine and where traditional HDD bottlenecks are most directly experienced.

In addition to stressing the controller with a demanding heavy queue depth workload to sort through, this test will give any weak controller a complete panic attack by overwhelming it with simultaneous random read/write operations to juggle with large sequential writes, which is the Achilles’ heel of many cheaper SSDs.

Queue depth optimization has long been a strength of Intel’s own SSDs, however, there is enough differing types of workloads here that regardless of drive, every SSD should see some part of the workload playing to its own unique strengths in some fashion. A good-quality SSD should allow the system to remain responsive as the tasks are carried out in the background at all times. (Please for your own safety don’t try this at home on your HDD!)

Our Heavy test consists of all-the-above in addition to a full Anti-Virus scan occurring concurrently in the background. The AV scan uses a static, unchanging 5.1GB test folder that contains 19,748 files and 2,414 sub-folders created from both Program Files directories!

Granted, even with a Core i7 processor, no computer user would be performing all of these tasks concurrently unless they wish to see their computer go unresponsive for up to 30 minutes at a time, but with an SSD, this is almost child’s play! If you think we are exaggerating, then just look at what a fairly typical SATA HDD was able to offer, which is a representative sample for any other desktop HDD.

Last but not least, the Light test changes things slightly. This test is a batch file designed to execute several programs as soon as Windows 7 boots to the desktop. This light test will open four websites in Firefox, load five images in Photoshop CS4, start playing our favorite 56MB FLAC music file in Winamp, and open a single large Word, Excel, and Powerpoint document, in addition to a single PDF file. For this specific light test in particular we start measuring from the moment the power button is pressed to the moment the last program and all files have been fully loaded ready for use. 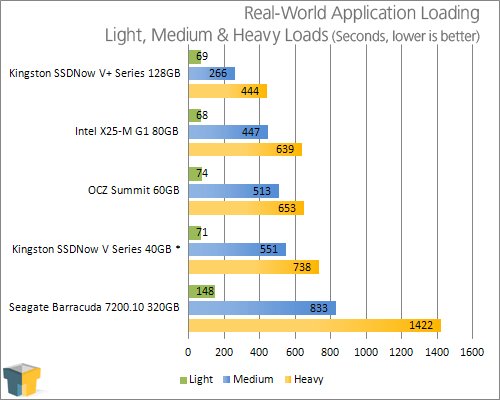 Starting with the simple light test, all of the SSDs are able to boot to Windows 7 64-bit and load all the programs in just over one minute. In the time required for a regular hard disk drive computer to boot, it is possible for an SSD to boot and have fully loaded a multitude of programs and files, as the nearly two and a half minutes for the HDD clearly shows, versus the 68 and 69 seconds for the SSDNow drives.

For the medium scenario we start to separate the men from the boys, but unfortunately for the rest of our drives, the Toshiba-based V+ 128GB SSD drive pulls out an extremely surprising, impressive lead against all the other drives! In four-and-a-half minutes, the Kingston SNVP325 128GB drive is completing the entire workload while keeping the system responsive, friendly to use, and stutter-free!

Requiring close to double the time (7:27), the Intel G1 drive is clearly showing both its write bottleneck of 80MB/s and its lack of TRIM support, yet the competition fairs even worse. The now discontinued 40GB V series drive only has half of the normal 10 flash channels and this, as well as the small drive capacity, limit it to a time more than double that (9:11) of the V+ series 128GB SSD! For those like me that are too lazy to do the math, the outclassed mechanical hard disk drive completes the identical scenario in not quite 14 minutes. A time of 4:26 versus 13:53… are you starting to see the advantage of an SSD yet?

To make things even more interesting we threw in a long anti-virus scan for the heavy test but the workload has not otherwise changed and mirrors that of the medium testing scenario. As with our other tests the results remain fairly consistent (or consistently bad, depending on your drive of choice) although we must make special mention of the Toshiba controller here. Most likely thanks to its TRIM support, this drive posts the most consistent and reliable results by far, without any obvious choking under the extreme workload.

As if to prove the point that “value” does not always mean poor performance, again the Kingston SSDNow V+ series drive walks away from all of our other test drives! We really wish we had an Intel G2 drive or Indilinx-based Vertex just to see how well one of these two TRIM-capable drives would fare here! Nonetheless, amongst these drives the TRIM capable 128GB Kingston SSD is superior and the clear choice, putting in a time of 7:24. This time is actually three seconds faster than the first generation Intel X25 drive did in the medium test! Clearly, the time of Intel’s first generation SSDs has passed by.

For those users wondering how well a standard hard drive fared, yes you are reading that right. While the best SSD required 7:24 to complete, the HDD managed a not-so-impressive 23:42, or three times longer to complete the same workload.

The limitations of mechanical hard drives should be a bit more clear after seeing these numbers, but there is one more point to make. Just like with every extra few cars in the wrong place can make that morning traffic jam all the more worse, with every additional task the hard drive takes significantly longer to complete all previous tasks it was attempting to perform, showing the HDD has become completely saturated and has no room left for additional performance.

We should add that the hard disk drive would frequently balk and refuse to open random files as it became overwhelmed; it simply could not keep up with such a high workload queue, not to mention the computer became unusable until most of the tasks had completed. Also, while most SSDs lost their super-snappy, instant gratification results, unlike with the HDD the system always remained responsive and work could still be done in the background. The Toshiba-controller is no slouch and gave us a very responsive computer that was clearly struggling less under the barrage of file operations. In fact we would be hard-pressed to even care if we had to use the computer with the Heavy scenario running in the background, it’s just that good.

What to take away from this is even with the most brutal of scenarios, it is that SSDs that are best suited for heavy multi-tasking and quite capable of handling any sort of workload you wish to throw at them. Or simply every type of workload at once, it is up to you. It isn’t drive throughput that matters as much as small, random read/write throughput which is a completely different animal. And, with an SSD installed, there is no longer any excuse for not having an anti-virus program installed. ;-) 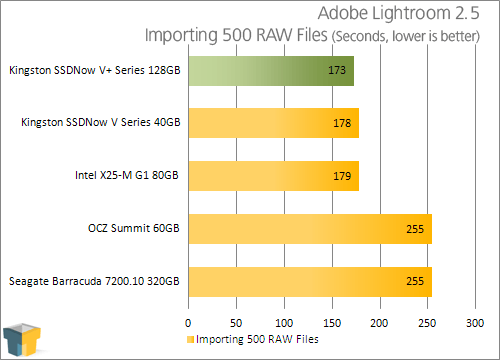 Somewhat interesting is that the results are split into two main categories here with the Summit only able to tie the hard drive, while the other drives clump together under the 3 minute mark. It appears the Lightroom test is not demanding enough, and another system component (likely the CPU) has become the bottleneck here rather than the storage drives with our faster SSDs here. Remember, Lightroom only utilizes two cores when loading and creating its image library, so it is not fully utilizing our quad-core CPU, either.