The new Kingston SSDNow V+ series featuring Toshiba’s controller and flash memory has proven itself to be a worthy alternative as a slightly less expensive solid-state drive that doesn’t compromise on performance. With TRIM able to keep the SSD from experiencing the typical slowdown effects as the drive undergoes normal use, it is able to maintain 160MB/s write speeds and quick response times without the performance vanishing after that first initial honeymoon period from its installation.

Given the price bracket these Toshiba drives are targeting, we can only wish we had either an SSDNow M G2 series drive that supports TRIM or the Indilinx-based Vertex which also supports TRIM to compare against. While the performance is exemplary, we can only guess at how well it would stack up against either of the these well-known SSDs.

Still, if you are Sir Lancelot questing after the elusive holy grail (the absolute best SSD at any price), then it is a safe bet that the soon-to-be-released Micron RealSSD C300 solid-state drive would be the only viable option for you. For everyone else, the Toshiba-based SSDNow V+ drives from Kingston would be a great performing drive to be added to the admittedly still short shortlist in that never-ending quest for a faster computer.

There isn’t much left to address, noise isn’t a factor for a SSD and obviously durability will be better as well. The drive housing never even grew warm with the 200mm fan cooling the drive cage. Kingston states power consumption is 2.6 watts active and 0.15w idle. Perhaps more important to mention would be drive longevity, however we are confident that the MLC flash will easily outlast Kingston’s three year warranty on these drives. 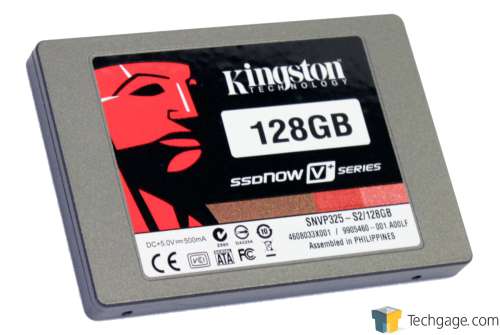 After formatting, useable capacity is 119GB, but don’t feel cheated as unlike hard disk drives, the missing 9GB is still present. This 9GB is used by the drive as spare area to help maintain drive performance as the drive is filled to capacity, in addition to providing additional memory cells to replace existing cells as they do eventually wear out as all MLC NAND flash will over the lifetime of the unit.

My personal feeling I received during testing might be biased as this was the first SSD I have personally tested with TRIM, but the difference was astounding! Drive performance was the most consistent that we have experienced out of all the drives when compiling our test results. Out of all the drives, including the first generation Intel SSD if given a choice I would prefer to use this one the most in my own personal system, which should say it all right there. This drive’s performance in our batch file tests was the final confirmation that this drive doesn’t focus on sequential write speed to the exclusion of all else, although this is one of the strongest suits for this drive it still is more than capable of extreme simultaneous random file read/write workloads even with concurrent sequential writes occurring in the background.

To give you just a little perspective, the 160-180MB/s write speeds are far superior to Intel’s best write speed of 100MB/s for their 160GB G2 SSD, making the SSDNow V+ series an extremely attractive alternative if sequential writes are more important with your type of workloads. Not to mention the 128GB is significantly cheaper at $380 versus $600 for the equivalent 160GB X25-M drive from Intel. One doesn’t need to compute the price/GB ratio to see that Kingston’s drive more than lives up to the Value+ name, delivering better performance in many areas at a more palatable price. Therefore the only real competitor to this drive is OCZ’s Vertex which can be found at for a bit more for slightly less capacity.

We are left wondering just quite how much of the difference was because of the controller, but will soon be adding more TRIM capable drives to our test results to find out for sure. Again if you would like to see any results not shown or you regularly use a disk-bound workload and would wish to see it utilized in one of our benchmarks, then please drop us a line as we are seeking new real-world programs uses like you utilize on a daily basis that are bottlenecked by traditional storage formats like mechanical hard drives or non-TRIM capable SSDs!