Generally, when we think of ways to increase our computer’s performance, the first thing that naturally comes to mind is to upgrade the processor. Or, as a gamer, you may think to upgrade the graphics card first. But, regardless of your preferred order, increasing the system memory usually follows in a distant third. Beyond these options, though, what else can actually increase your computer’s performance?

We aren’t talking about usability, features, aesthetics, or even cooling, as none of these inherently will increase the speed and responsiveness of the desktop that is near your foot or on your desk. There just isn’t much else that jumps out as an obvious upgrade to increase actual system performance.

An often overlooked or not considered option is the hard drive. For the better part of the past decade, enthusiasts that wanted the absolute best performance from their machines would turn to Western Digital’s Raptor series of hard drives, which offer enterprise-level performance in a typical consumer hard drive. Shaving a few seconds off of level load times, the faster launching of applications, seeing faster file transfers and generally having a slightly zippier system were enough to justify the price premiums these drives demanded.

The only constant with technology is change, and skipping forward to today, Solid State Drives have already begun the process of displacing Western Digital’s exclusive Raptor offering as the only choice. The SSD market is only just beginning to mature, but already there are a myriad of fast SSDs that will trump any mechanical disk in performance, and in price.

Before we go further to take a look at the latest SSD model from Kingston, we would like to make a request of our readers. As technology changes, we strive to stay in sync, but as with all new technology, it poses its own challenges to properly review. To help us deliver the content you are looking for, please let us know what you liked, didn’t like, or wish to see in our future SSD content, by following the link to our forum discussion thread at the very end of the review! 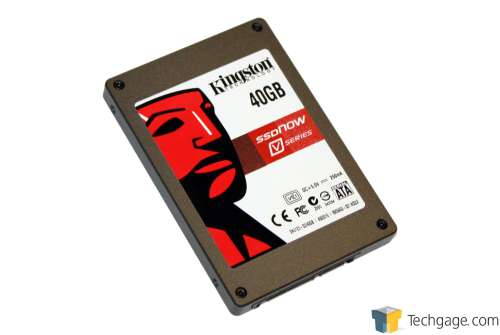 SSDs can offer the ultimate in storage performance, but they also offer the ultimate in sticker shock. Therefore, Kingston has decided to break the trend and deliver some of the best performance at the lowest price with its new SSDNow V Series 40GB drives. To be honest, in the era of 2TB hard drives, 40GB is obviously not very much space, so it is easy to see how Kingston was able to bring down the price.

With only 40GB to work with (37.1GB useable), Kingston has chosen to position this drive as an entry-level upgrade to any mechanical hard drive-based system. The idea is the hard disk would be relegated to provide data storage, while optimally, the 40GB SSD would be just enough to house the operating system and programs. Data and programs that don’t require a blazingly fast hard drive can simply be relegated to the hard disk drive.

Before moving on, we need to clarify a few things about the SSDNow V series. Unfortunately, there are three very different kinds of drives that feature the “SSDNow V” moniker, and two of them are worth avoiding completely. The only SSDNow V series SSD guaranteed to use the Intel controller is the 40GB model. If that isn’t confusing enough, there are still M-series drives in the market using Intel’s first generation controllers and 50nm NAND flash under the SNM125 model. The second generation M-series controllers with 34nm flash have the SNM225 model name. If the marketing department’s goal was to sell less attractive models by confusion, I’m sure it has worked, so we have assembled a quick reference table here to sort everything out.

The Kingston drive in this review is an interesting one. Unlike any other entry-level SSD currently available, the controller found in the Kingston SSDNow V 40GB is Intel’s second generation SSD controller. More specifically, the same one found in Intel’s own G2 SSDs! Knowing this, we can already expect reasonably good, completely stutter-free performance of this drive. Intel’s advertised low 1.1 write amplification and wear leveling algorithm are amongst the best, ensuring that this SSD should last a respectable amount of time before the NAND memory begins to wear out.

Just about all solid-state drives offer spare area that is used to maintain performance and wear leveling operations as the SSD fills up, and the 40GB SSDNow V Series is no different. So in effect, while the formatted capacity of the drive is only 37.1GB, that remaining 2.9GB does still exist and is used by the drive for this purpose. If any of these terms need more explanation or you would like to see a primer article on SSDs and how they function, please let us know! We’d love to ‘gage’ interest on that one.