For this test, we took a disc image and timed how long it would take to transfer to a second partition on the same drive. Keep in mind with a hard disk, this requires the actuator arm to seek back and forth between the source and destination sectors of the disk platter, while any SSD can instantly read and write to multiple flash chips. 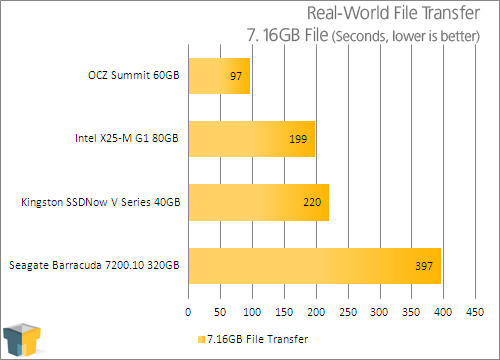 The Summit’s Samsung controller is optimized for sequential write scenarios so it easily takes the cake here. While the Kingston offers a more advanced version of the controller found in the G1, only having 5 of the original 10 flash channels ensures it has to settle for third in this one.

For this test, we created three batch files to simulate three kinds of multitasking scenarios. One of the best cases for an SSD is multitasking where multiple concurrent drive operations are in progress. With a traditional HDD, any storage-related operations would quickly slow to a crawl, but with a SSD it requires significantly more punishment before drive operations become affected. Even then a good quality SSD should allow the system to remain responsive as the tasks are carried out in the background.

The Heavy test consists of all-the-above in addition to a concurrent anti-virus scan on a static 5GB folder. This folder was constructed by copying many Program Files directories, which are typically full of a multitude of small files. There is nothing quite like an anti-virus scan to bring a computer or your FPS to a sudden crawl, although that is not necessarily true with an SSD.

Granted, no normal user would be performing quite all of these tasks all at once unless they wish to see their computer break down and cry for mercy, but frequently we find that several of these programs or operations are open or ongoing at any one time. Whether editing a financial report while listening to music with the browser opened on the side, or creating archives while transferring files across the home network, or working in Photoshop with many small programs operating in the background, multitasking is fairly commonplace. The results show which drives are able to best to cope with severe workloads and are able to complete them the quickest.

Last but not least, the Light test consists of a batch file that will open four websites in Firefox, load five images in Photoshop, start playing our favorite FLAC music file in Winamp, and open a single Word, Excel, and Powerpoint document, in addition to a single PDF file. This batch file is placed in Window’s Startup folder, and all these programs are loaded when Windows starts. For this test in particular, we start measuring from the moment the power button is pressed until the moment the last program has finished loading. 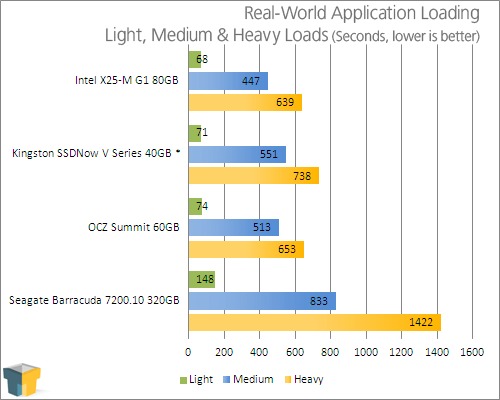 In the Light scenario, all of the SSDs are able to boot to Windows 7 and load all the required programs in just a little over a minute. The sole HDD takes a little over two-and-a-half minutes to do the same, or about twice the length of time!

For the Medium scenario, we begin to see a bit more separation between the individual SSDs as each controller’s optimizations come into play. The X25-M leads with an average time of 7:27, followed by the Summit at 8:33, and the Kingston with 9:11. The unfortunate hard disk drive eventually finishes with 13:53, which is almost twice as long as the X25-M!

We need to mention that due to capacity constraints, there was not sufficient room to copy the 7.16GB file on the Kingston for the batch testing. Instead we copied file a third in size three times in quick succession to simulate the 7.16GB file. While not perfect, it enables us to still provide reasonably comparable results.

For those readers that still use anti-virus scanners (and especially those that do not), the heavy test performs the exact same medium scenario, but adds an anti-virus scan of a sample, static 5GB Program Files directory. For the SSDs this only adds between 2-3 minutes to the final time… but for the hard drive, this last act is to much. The HDD managed an impressively large time of nearly 24 minutes versus the 6-8 minutes required for the solid-state drives!

We should add that the hard disk drive would frequently balk and refuse to open random files as it became overwhelmed; it simply could not keep up with such a high workload queue, not to mention the computer became nearly unusable until most of the tasks had completed. Also, while the SSDs did slow down, unlike with the HDD the system remained responsive and work could still be done.

What to take away from this is even with the most brutal of scenarios it is the SSDs that are best suited and quite capable of handling any sort of workload you wish to throw at them. Or simply every type of workload at once, it is up to you. It isn’t drive throughput that matters as much as small, random read/write throughput which is a completely different animal. And, with an SSD installed, there is no longer any excuse for not having an anti-virus program installed. ;-)

For this test, we take 500 large RAW picture files, and import them into a brand-new Lightroom library. We time how long it takes the program to cache and import the files. 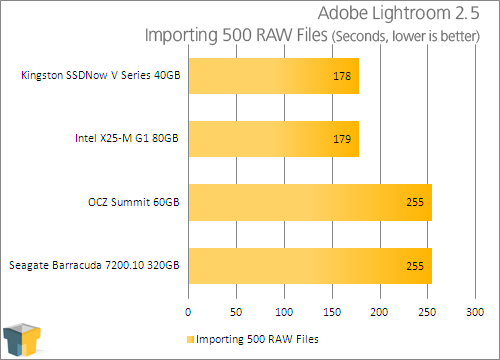 Somewhat unusual is that the Summit fares the same as the HDD here, while Intel controllers seem to be able to handle this kind of workload much better. While only having half of the flash channels available to the G1, the Kingston’s G2 controller seems more than able to make up for the difference keeping it just a second ahead of the X25. If Adobe Lightroom had been optimized to utilize more than just two CPU cores during the loading process, the results would have been even better.