Solid-State Drives have become one of the most recommended upgrade options to increase performance and general system responsiveness, with good reason. In the time required for a regular hard disk to boot an operating system, an SSD can have the system and several frequently used programs open and waiting on the user for input. In today’s world where consumers demand instant-on devices and immediate responses to their actions, an SSD is the single best upgrade to make it happen with a desktop or especially a laptop.

Performance is just one aspect, but responsiveness may even take precedence for some consumers that prefer to constantly perform tasks one after the other, without having to wait for the computer to complete the previous tasks before the system is usable again. As one extreme but potent example, no sane individual would consider playing a game with an anti-virus scan running in the background, but with a well designed anti-virus program and a good quality SSD a computer user would never even know it was occurring. There certainly wouldn’t be any telltale clicking from the drive to give it away either. And yes, I have put this example to the test myself several times; SSDs are just that good.

If you are reading this review then suffice to say you already know that the single-most hurdle preventing widespread SSD adoption has been and still is simply, price. The market for SSDs began to expand quickly once they fell below the $4 per gigabyte level. More recently Intel shook up the market pretty hard with the introduction of high-performance SSDs priced below $3 per gigabyte, but prices still need to drop significantly more to enable widespread adoption. Even so, the demand for SSDs is strong, and basic economics tells us as prices continue to drop demand will only continue to grow. 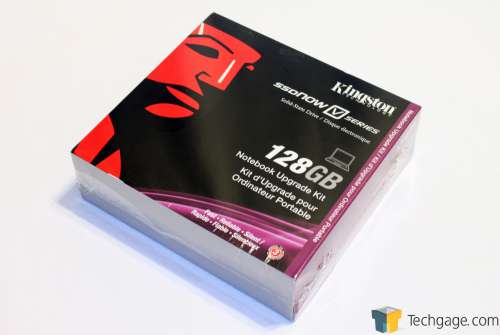 This brings us to the Kingston “V” series, specifically the SNV425. What sets this SSD apart is that it for the last several months it has been one of the absolute cheapest SSDs available. With only a little deal hunting a “V” series drives can be found just a little below the magical $2 per GB mark, making them the most affordable SSD upgrade out there at this time. Of course it is affordable for a good reason, and not because it is the best performing drive on the market! For this review we will explore if the performance is “good enough” and if so for what applications we might recommend it for.

The SNV425 “V” series uses the revised JMF618 JMicron controller and Toshiba NAND. As many enthusiasts fondly recall, it was the JMF602 controller that gave JMicron a bad rap and a reputation to avoid. It will be important to gauge how much abuse this SSD can withstand before the controller starts to become overwhelmed, the result of which being stuttering and inconsistent performance. JMicron has gone through great strides to improve its controllers, and Western Digital feels that way also as they appear to utilize the nearly identical JMF612 controller (with proprietary, custom Western Digital firmware) in its SiliconEdge Blue series.

We have put together the above chart to illustrate (and try to make sense of) the wide variety of SSDNow V series SSDs Kingston offers. This review is for the SNV425 model, but please be aware the very similar SNV125 models are nearly identical but use an older JMicron controller that does not support TRIM.

Kingston adds a “S2” designation to their model names, presumably to indicate SATA 2. When viewing models online, it will help to remember “B” is the Bundle, the desktop kit that includes a bracket, SATA cable, and accessories. “BN” is short for notebook bundle and is the kit intended for notebooks. Put it all together and the SNV425-S2BN is the drive in this review, is a SATA 2 drive, and happens to be the notebook bundled version. See, wasn’t that easy? Okay, maybe not so much.