The old rule of thumb that “if something is priced too good to be true then it usually is” certainly comes to mind here. There Kingston SNV425 has the unpleasant honor of delivering borderline performance and only acceptable responsiveness, often delivering the lowest performance we’ve seen from an SSD in our charts.

The SNV425 did not handle heavy usage scenarios well, often leaving the system unresponsive and occasionally generating an error if one program too many was opened concurrently. Under these conditions performance would become sporadic, differing significantly between runs. That general feeling one gets from having an SSD installed was simply not fully there. For a true SSD experience we would have chosen from almost any other drive.

Now we did mention at the end of our batch tests that there was one bright spot we would touch on. While the Kingston SNV425 was not capable of matching other SSDs, it easily trumped the hard disk drive and handled our light workload well enough without problem. While we do not recommend this SSD for use in an enthusiast or performance desktop, other applications where performance is not a primary consideration (but price is) might be better suited for this drive. 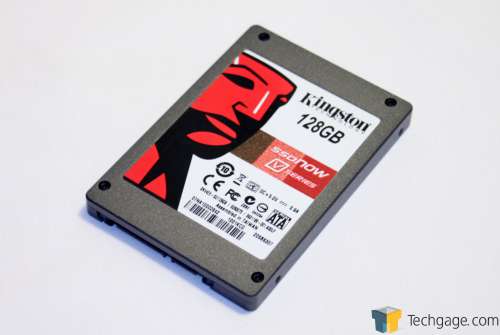 One such application would be netbooks. As netbooks use slower processors and tend to trade ergonomics and speed for size, the lower performance of the Kingston “V” SNV425 series would not be as much of an issue. Netbooks will only be subjected to light usage and workloads and as such users looking for a quick, low priced option to upgrade their netbook may be well served by this drive. Netbooks partially gained their appeal due to their rock bottom prices, and that is one attribute the JMicron-based SNV-425 shares with them, as it has held the title of lowest-priced SSD for some time on major online retailers.

Other options would be where the user needs the durability of an SSD but not the performance such as an in-car computer or stereo system setup. Although a touch expensive, simply using the drive as a significantly more durable, portable external USB disk with the included case is another possible option. But probably the best application for the Kingston SNV425 would have to be netbooks, where the CPU and memory bottlenecks would ensure that no user would be able to overwhelm the SSD to the point it begins to lose responsiveness.

All Kingston SNV425 SSDs include a three year warranty, and perhaps more importantly TRIM support, but do not support NCQ (Native Command Queueing). At $2 per gigabyte (or even less for those deal hunters) the Kingston SNV425 is unquestionably the cheapest SSD currently available. If price is the main consideration and performance is not so much, then Kingston has yet another drive for you. We still can’t recommend using it as part of a desktop system, but the SSD-like performance is more than sufficient to make it a suitable candidate as a replacement for any netbook hard drive or even most notebook drives.