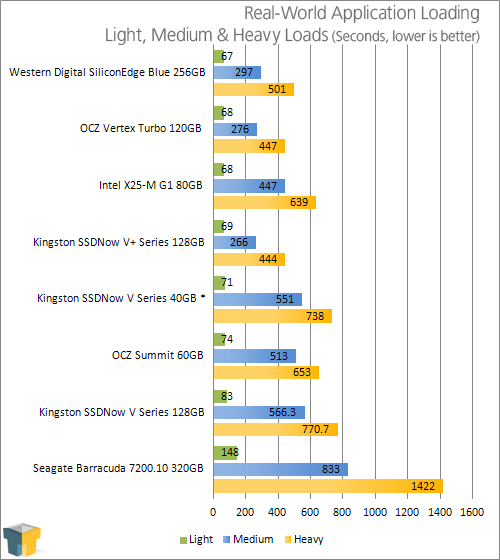 In the time required for a regular hard disk drive computer to boot, it is possible for an SSD to boot and have fully loaded a multitude of programs and files, as the nearly two and a half minutes for the HDD clearly illustrates. The latest Kingston drive to grace our unique test unfortunately delivers the highest boot times amongst all of the SSDs, at 83 seconds. Even so that’s almost half the time a traditional HDD required.

For the medium scenario things begin to heat up, with the more robust SSD controllers able to flex their strength. A controller needs to be good at just about every task to perform well in this scenario, which stresses every aspect of an SSD and not just pure throughput. The medium test results for the JMicron Kingston drive are not flattering, but they also do not tell the full story.

This Kingston SSD was the first SSD we have tested that gave us errors when battering the drive with too many IO and file requests. The only other drive to do this was the hard disk drive whose controller was never designed for such an extreme concurrent workload. The second problem is that while the drive delivered results over nine minutes in the final average, during testing results were all over the place. Best case we saw times around the seven minute mark, yet worst case two runs required almost double that of twelve minutes!

This sort of inconsistent performance only got worse for the heavy test. While the drive required thirteen minutes in the final score, actual results varied from ten minutes up to sixteen. This level of variation is not just unacceptable, but the JMicron-based SNV425 drive is the only drive to exhibit this drastic a variation in results. While we have established that the SiliconEdge Blue sibling’s custom firmware is far superior, we are nonetheless surprised that we did not experience results anything approaching this with the Western Digital drive. We can only conclude it is not the controller, but JMicron’s firmware that is the result of their poor performance record, a dubious honor at best.

The Intel G1 drive clearly shows why TRIM is important as its dirty state makes it easy pickings, although its write limitation of 80MB/s certainly does it no favors here either. The SiliconEdge Blue is able to complete the entire medium workload and the anti-virus scan in less time than the Kingston JMicron-based drive requires to run only the medium workload without the AV scan. Apparently firmware optimizations can and will have as large of an impact as the choice of controller itself.

We should note that the heavy test would actually begin to overwhelm the hard disk drive as the workload began to pile up behind the bottleneck. The Vertex, SSDNow V+, and SiliconEdge deserve an extra mention here as these drives gave the most responsive system even under the heavy multitasking scenario. Not even with the AV scan running did the system go unresponsive or stutter. We honestly would be hard-pressed to even mind using the computer under such workloads as the system remained responsive at all times. We can safely say that the JMicron-based Kingston drive gave us the worst user experience by far in comparison, only the hard drive was able to deliver worse as it choked under the queuing workload.

The only conclusion we can draw is that the Kingston SNV425 is not well suited for heavy workloads. If you are looking at upgrading to an SSD for its responsiveness while under heavy workloads, then we suggest looking at a different model SSD. In the light test it easily outperformed the hard drive by over a full minute while remaining only ten seconds behind other SSDs, which gives us one bright point to focus on later.