by Jamie Fletcher on July 25, 2016 in Editorials & Interviews, Software

With the Windows 10 free upgrade coming to a close for existing Windows 7 and 8 users, we’ve gone through Microsoft’s latest and last OS to see some of the features and considerations to pay mind to if you’re still sitting on the fence. With the anniversary release coming up, we also take a look at the future of Windows 10.

Third parties have provided desktop expansions and virtual desktops since the days of XP, but Windows 10 is the first time it’s been built into the OS directly. You can setup different desktops with different notifications on each. You could keep a desktop open for messengers and browsers, while putting everything else on another to cut out distractions. A useful productivity enhancement (see, it’s not just gaming).

Unofficially, virtual desktops does provide an extra bonus – when a fullscreen application dies with a black screen (we’re looking at you, games), switching desktops means you can close the application without rebooting the PC. A number of staff here at Techgage have used that particular trick a few times. Now if only Microsoft had a way of preventing apps from doing that in the first place. 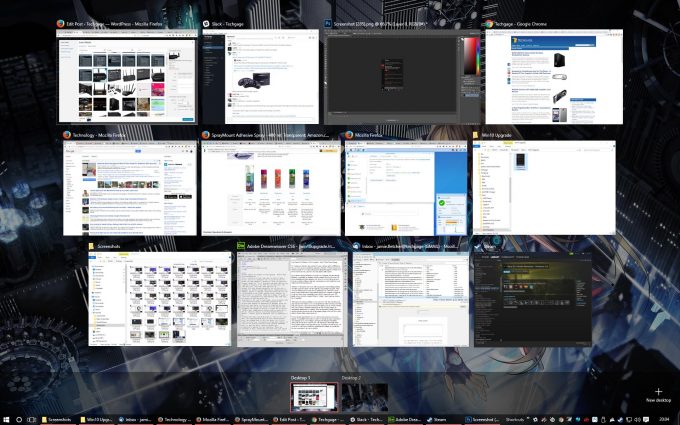 Not everyone will see the benefits of these, but those that work on Windows and/or troubleshoot hardware on a regular basis, will be falling in love (or crying out ‘finally’ would be a safer bet) with the new power user and developer tools. We’ll start with the big one, you can now (here’s that finally) copy and paste directly in the command prompt – no more ^V or using the mouse to paste! You can more easily copy text within the prompt too, for pasting into forums when you need help with an issue.

Sticking with the command prompt still, you can open an elevated prompt more easily by right-clicking the start button, instead of either SHIFT-RETRUN after typing CMD, or finding the tool in the start menu then right clicking. Simple, but useful tweaks.

The Task Manager and Resource Manager, first introduced with Windows 8, have seen steady improvements; letting you change boot options without using msconfig, showing you what’s hogging your bandwidth, thrashing your hard drive, or applications masking themselves under other services.

Quick access, favorites and custom shortcuts in Windows Explorer (file management) make navigating multiple hard drives and projects less stressful, as they can all be saved in a single area. It’s basically what libraries should have been when first introduced. Default apps management has been overhauled, and a much better user interface system has been implemented, so you don’t need to use the horrendous ‘open with – other’ system, as all app defaults can be access from the same menu.

The notification area for system, apps, messengers, etc, brings all notices into a single place. This is provided to all applications which make use of notifications. In simple terms, it means you won’t have to deal with multiple pop-ups about new messages from different applications. The slightly bad news is that not applications have caught on, instead using the new notification system and their own notices too, so you can get more popups – this is more the apps fault than Windows itself.

Finally, there is one power tool that isn’t available just yet (it’s available as a beta), but soon to be integrated, and that’s bash support at the command line. Yes, a little slice of Linux is finally making its way over to Windows. There are some limitations though – the most obvious is that this doesn’t mean Linux is supported and all the command line tools from your favorite distro, it just means that the bash scripting language can be used within the command line. Bash isn’t aware of Windows either, but can use Windows commands within bash scripts. Anyone that’s been introduced to GREP will find it supported too (hooray, regex at the command prompt), along with SED and AWK.

Integrated tools within windows makes creating system backups easy, and a full restore is something that’s been missing from Windows for a long time. Normally, if a problem occurs with Windows, you have to use some kind of boot media and then provide the system with recovery media in order to restore the system. Windows 10 lets you restore without boot media through the protected partition, and load up any restore point on the same drive or external media. If a service-pack update goes bad, Windows 10 can rollback the entire system to before the update, as if nothing happened. 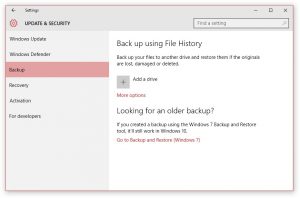 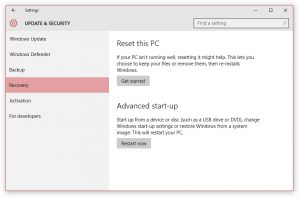 The system isn’t perfect, especially for those with limited disk space. If upgrading to Windows 10 from 7 or 8, it will create a full restore point of the previous OS, and this backup can be 30GB in size. When a service pack update is installed, another full backup is created as well. If you are running on a single 120GB SSD, you can quickly find ourself running out of disk space without knowing where it’s going (since Windows 10 hides the restore points to prevent accidental deletion).

Moving Forward With The Last Windows

This is something that has been mentioned by Microsoft on a number of occasions, and it’s that Windows 10 will be last version of Windows. No more annual version updates, no more arbitrary cutoff points in support – it’s now Windows as a Service.

If that raises alarms, you are not alone, as the thought of paying a subscription fee for your desktop terrifies many – at least in the mainstream world. Businesses have been doing this for over a decade, but there are clear boundaries in what’s expect from a business contract and a home user.

For now, there is no annual fee, nor will there likely be any time soon. Microsoft will continue to make money on new licenses from new hardware, the same as it always has. Generally, that’s the only time users change Windows versions, with new hardware. They rarely change OS on an existing system (which is why Windows XP would never die). The incentive to push Windows 10 on existing users was mainly to incentivize a new money stream by convincing users to buy from Microsoft’s store.

With the switch to Windows 10 though, there’s no separation in functionality between different versions. Windows 10 will behave the same on all systems… bizarrely, it’s bringing the console mentality to PCs (sorry gamers). Microsoft will roll out new service packs with new features, and the only way to get them is if you keep your system up to date. As soon as you stop updating, no new features, it’s that simple.

Will there be a cutoff point where upgrades and service packs will no longer be free? That’s the big question, and one that can’t really be answered at this point. While the prospect of a unified Windows that runs on all systems and lasts forever, with free upgrades every year might sound appealing – the truth of the matter is that, for Microsoft, it really doesn’t matter. People rarely upgraded to begin with, yet they still managed to make a tidy sum of money. An infinite free upgrade cycle could very well be a possibility… but who has a computer that can last forever?

The first major service pack for Windows 10 will roll out August 2nd, just a couple days after the free upgrade expires for Windows 7 and 8 users. This update brings with it a fair few nice features – not all of them will appeal to all users, as there is a general mix of tablet and phone features mixed in as well.

Windows Ink lets you use a stylus more efficiently, and across a broader range of apps (like edge). This also ties in to Cortana as a secondary input, rather than just voice, and works much the same as the voice commands.

Edge, Microsoft’s replacement for Internet Explorer, finally gets the extension support that people have been crying out for over the years (it’s still a shame that ‘the IE way’ is still a thing in web development). 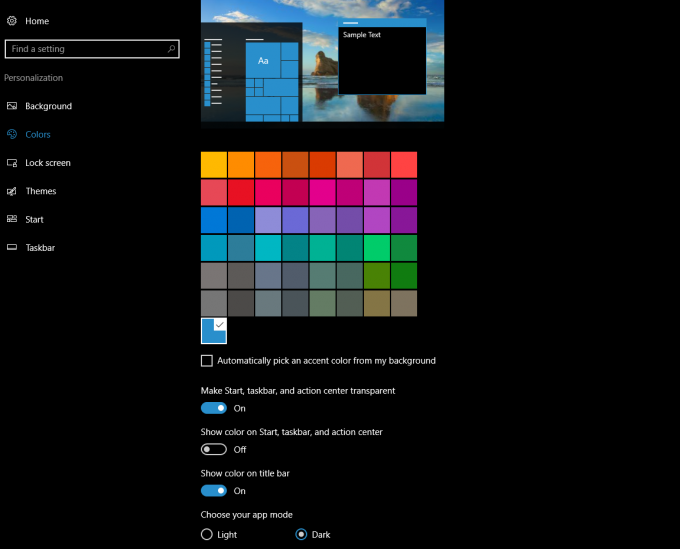 One feature that has a number of people excited is a true dark theme, something that has been sorely missing from every version of Windows without a third-party tool. no more black on white, but dark background with light text, to prevent the common issue of eye strain.

A simple yet welcome tweak is also automatic time zone switching, something that’s been available on a number of other OSes for a while. So frequent travelers won’t need to change their system time every time they cross an international boundary.

There are plenty of other tweaks too that can be tackled in another article, but suffice to say that Windows 10 will continue to grow and evolve, and it’s not going away. Windows 7 and 8 however… will disappear sooner or later. If you’re in a position to upgrade, or if you plan on keeping your current system for as long as possible – it might be worth the teething problems and finally upgrading before July 29th.