There are many Media Panels on the market, some that have similar purposes, and then some that don’t. There have been a few 20-in-1 media panels to hit the market over the last while, such as the Sunbeam version, which looks identical to the one we are reviewing today.

Without a doubt, a media panel can be very useful. My favorite feature would be right off, the fact that it reads memory cards. No more draining your cameras batteries while you copy the files over to your PC. To boot, it reads nine different types, such as Compact Flash, Micro Drive, Memory Stick, Memory Stick Pro, Memory Stick Duo,Duo Pro, SD card, MMC card and SM card. 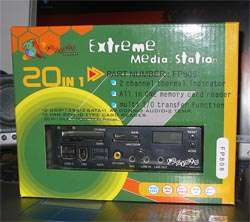 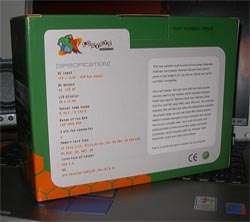 Included also, are two USB 2.0 connectors and one Firewire. Chances are that your case already has these connectors in the front, but it’s still a great feature to have, especially if you have too many USB devices.

The panel even includes two S-ATA connectors, for your external hard drives, or for an easy way to just test out a drive. There is also an AV Connector, Microphone, Line-In and Line-Out connectors, if you need them. The screen is also capable of displaying your fan speeds and current temperatures.