In the end, did the Windowed version of the Case-51 generally improve over the original case? Well, that’s a yes and no answer. Yes, it finally has a window, and that’s something I wanted since the first version. It also has a RGBY LED fan on the case. But wait! Looking at the photos below, you can see that it’s not a RGBY fan, but rather a Blue LED fan. I actually prefer the Blue, but in their description, it states a RGBY one. 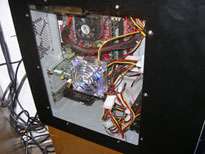 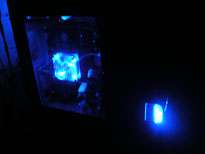 Since the case is similar to the first one, it still has plenty of space inside, and looks fantastic. The matte black color is great, and really adds to the effect of the theme. One thing though, is that I expected the paint job to be better. Looking at the picture below, you can see at the top of the front plate, there is a color differential happening, where one shade of black looks different than the other, on the same piece.

One more problem to point out, is that the window side didn’t close absolute flush for me, leaving a minor gap, exposing the silver inside. This is not very noticeable, unless you are looking for it. I only noticed this when I put everything back together after installing the components. 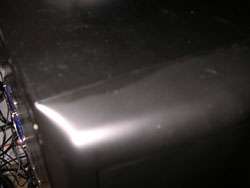 Those gripes aside, it’s still a good case. Though the included PSU leaves much to be desired, the overall price is still nothing to complain about, especially if you plan to use this as a case for your second PC, or as a case that doesn’t cost much money, but doesn’t look like crap.

Thanks to Grace from Logisys for allowing us to review the case!

Have something to say? Discuss this review in our related thread. Further questions about the product are also welcomed.