Do you have a hard time playing intense games for hours at a time, due to holding the mouse with your sweaty paws is impossible? Logisys tries to answer this gripe by throwing a fan smack dab in the mouse. Is this mouse as cool as it looks?


After a week and a half of use I find that I rarely use the fan because of the slight hum vibration it gives off. While playing a game after a while your hand just feels strange, almost as if it is asleep, and many gamers know that control over your mouse can mean life or death.

The chrome paint on both sides of the mouse where my thumb and fingers rested have already started to wear away, more so where on the thumb side. I am an average PC user, I check emails and play games daily, so a casual user may not have this problem right away, but it will likely happen eventually. The chrome detail has worn off so much that I can see the glow of the LED light through it. One word comes to mind. Cheap. 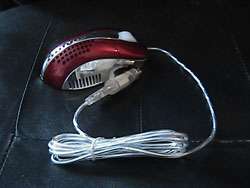 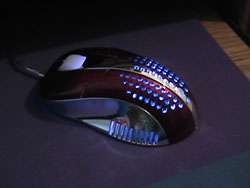 I also had a few issues with the mouse freezing up while browsing web pages. My pc was still functional, the system itself hadn’t locked up, just the mouse. The optical lens is clean, so I know that is not the problem. While using my Dell’s Logitech scroll mouse, I’ve never had the mouse freeze up. I found this to be discouraging, and am still in the dark as to why the mouse kept malfunctioning. Several times this happened I had to restart my PC to get it to work. I lost some things I had been working on, and to my eternal shame did not save. I was not happy. I switched back to my regular mouse.

Overall I found the mouse was ok, it did as it claimed and kept my hand cool and dry while I used it. The LED light is very nice and gives the mouse a real modern look. It would pair great with any system that boasted LED’s, but durability wise I find that it is lacking. It feels cheap and with the paint rubbing off after about a week and a half of use I can only imagine what the mouse would look like after a month… two months. Added with the mouse freezing up at times I find it less than impressive. 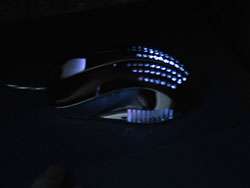 If those attributes and the fact that the fan vibrates a little when on wouldn’t bother you then this could be your cup of tea. I, however, cannot say that I was sold on the idea and would never buy this mouse. If an inexpensive mouse is what you want then this would work, but if I were you I’d save my money and get a better mouse for your buck. Even though we couldn’t give it a higher rating, I thank Logisys for allowing us to review the mouse.

Have something to say? Discuss this review in our Forums.