If you have a need to power up your computer with a remote control, Logisys has the answer. Their remote multifunction panel allows you to do just that, and more.

Last month, we took a look at the Logisys 20-in-1 Multifunction panel. That product is quite similar to what we are looking at today, except it will allow you to power on and off your computer via remote control. Before we jump straight into the review, let’s take a look at what Logisys is about. 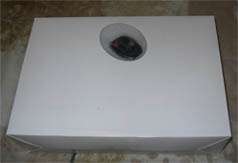 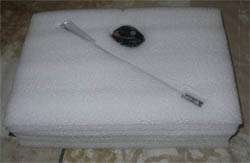 First thing I should mention, is that this is a prototype version of the panel, and revisions have likely been made since the time this was received. In fact, some of the functionality was lost, but could be fixed with some soldering, but I bypassed that, as I don’t have a soldering gun on hand.

At any rate, this panel is designed to give the end user a lot of functionality. Firstly, it comes with some features that a lot of multifunction panels include. Such as, (2) USB 2.0 ports, (1) Firewire port, fan control and temperature gauges. What makes this panel completely unique though, is the remote control functionality.

One thing I didn’t like about the 20-in-1 Panel, was the installation. It was not easy, especially working with a smaller case. I was pleased to find out that the installation of this panel was much easier though. I was able to make all the connections, and push the panel in through the inside of the case into the drive bay. While it was still a tight squeeze, it was nothing major.

Installation was actually fun. You are required to install an antenna in a PCI slot, and connect that to the panel. I was unable to install the antenna to a lower PCI slot, because the cord would not reach, so I have installed it above the video card, as you can see in the picture. 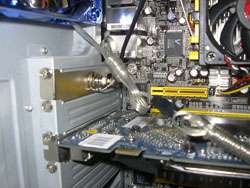 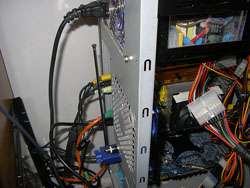