The review case did not include a Power Supply, but the retail version does. The retail version includes a Power Lab [never heard of them before] 450W PSU, so that should be a great amount of power for starters.

After going through all those features, I would have to say it’s about time to install the hardware. As I mentioned earlier, there is plenty of room in here, so I didn’t expect it to be too difficult of a task. After installing the motherboard mounts, it slid in flawlessly. The entire installation process went pretty smoothly.

The most difficult part was the Power Supply, as there is no real guard inside to hold it up. There are two small guards to help hold it in place once the screws are in, but you need to hold it by hand while screwing it in place. This is only hard because I usually use two hands.. one to hold the screw, and the other to screw it in. However, if you have a magnetized screwdriver, it will be made easier. 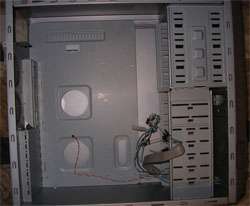 Alright, enough screwing around. As you can see, everything fits in great. The only problem I had, was connecting a 80mm Fan [not included] to the power supply. But this is mainly due to the exact configuration I had, and you will not likely run into the same problem. Some components got power hungry, and didn’t want to share, I guess. 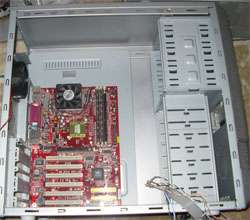 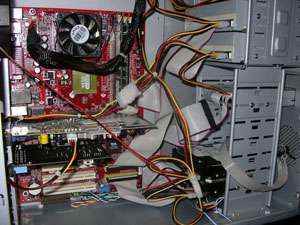 One thing I should mention though, is that on my setup, I had a hard time pluging my monitor into the video card. The clearence between the card and back of the case is so tight, that my monitors actually plugged in on a slant. You may not have this problem, but with my MSI KT4v mobo that’s measured at 30.5 cm(L) x 21 cm(W), I did. Overall though, installation was great.