When it comes to VR, immersion is the name of the game and comfort is undoubtedly tied to this. When using VR, there is often a compromise when it comes to audio. Logitech has set out to eliminate this compromise with Chorus VR headphones designed for Meta Quest 2. How did it fare? Let’s dive in!

VR is great, and it really has come a long way in the last 5 years or so. There were so many nay-sayers that have been proven wrong by the innovation and accessibility offered by the Quest headset and others. Personally, I don’t care for Meta (formerly known as Facebook), but its contributions to truly accessible-to-the-masses VR can’t be ignored. If you’ve been on the fence about VR, all I can say is that the Quest headsets have been amazing for me.

When it comes to truly immersive VR, sound has always been something of a weakness with the native offerings from the Quest lineup. With the original Quest, the sound was not very good, almost requiring headphones or earbuds of some kind. The Meta Quest 2 brought much better native audio, but still left something to be desired because of the tiny speakers pointed at your ears. 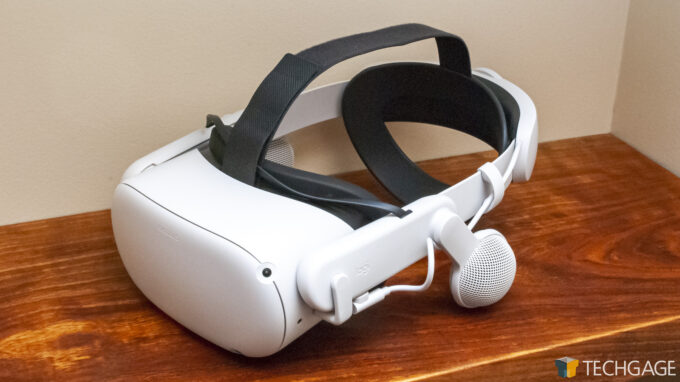 Personally, for me, I found the native audio on the Quest 2 to be unusable because of my giant, fat head. The speakers are so close to your face that if you have the audio turned up at all, the vibrations from the speaker holes can tickle your face, quite annoying! So back I went to earbuds or headphones. Earbuds aren’t ideal because they can make your ears ache after a while, and headphones add weight and can make you sweat if you’re playing a game that requires more physical interaction. Not to mention, having to deal with wires isn’t any fun.

Logitech saw the gap here and has introduced the Chorus. The Chorus is an off-ear integrated audio solution for the Meta Quest 2. The Chorus easily installs on top of the included Meta Quest 2 strap, or even the Elite Strap with Battery from Meta. The Logitech Chorus only adds 6.4 oz (182 grams) and really feels like a first party device. It matches the aesthetic of the Quest 2, making it easy to forget that this is a third-party device. 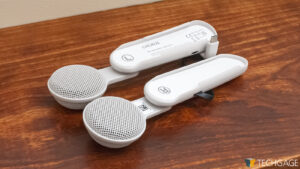 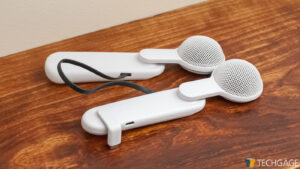 The device requires no setup; once you plug it in, you’re ready to go. Audio is always very subjective, but I can say with confidence that this is a significant step up from the native audio offering from the Meta Quest 2. Not only does it eliminate the tickle I mentioned before, but it delivers a far more immersive audio experience with much more defined lows, clearer mids, and brighter highs. There isn’t one end of the audio spectrum where this shines in particular, but overall is a much nicer listening experience. The ear cups are adjustable, but I found myself leaving them in the downward-most position all the time.

This, however, is where the positive points of the Logitech Chorus start to dwindle as some of the limitations begin to show through.

Firstly, the Chorus is only compatible with the included strap that comes with the Quest 2, or the Elite Strap with Battery, offered as an upgrade from Meta. There are many people who don’t care for either of these options, and because of this there is no shortage of options when it comes to third party straps, even some with integrated audio offerings. Personally, I like the Elite Strap with Battery, so this isn’t an issue for me, but it’s definitely worth mentioning. 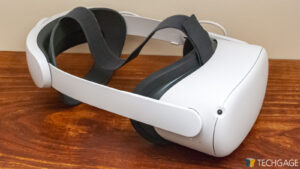 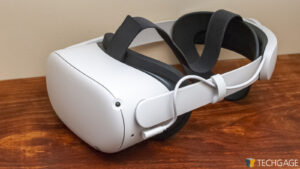 Secondly, and this will be a no-starter for some – you cannot use the Quest 2 data cable for tethered VR playing. There is no data passthrough option in the Logitech Chorus, so if you really enjoy playing hard wired to your PC, this will probably kill the deal for you. I feel that wireless play has gotten so good with such low latency; I use Virtual Desktop to play Steam games with and I have no issues whatsoever. Because of this, I don’t see it as a real limitation of the solution for my use. 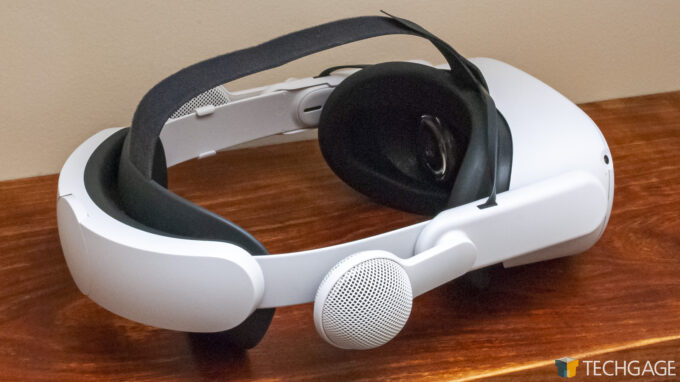 Overall, I am pretty satisfied with the Logitech Chorus, but I did encounter some issues with charging my Meta Quest 2 with the Elite Strap with Battery. It’s kind of hard to pin down, but I believe the main issue is I have to charge up the Chorus with the Quest 2 powered on. Charging with the Quest 2 powered off doesn’t seem to work if I am charging it through the Elite Strap with Battery. Even then, sometimes I would have to unplug the Chorus and the Elite Strap’s power connection and plug everything back in before it would show the proper battery stats in the Quest 2. There seem to be many other users out there with the same experience, so you will want to consider this before you decide to take the plunge. Some users tend to expect issues like this from a third-party device, while some find them a deal breaker. 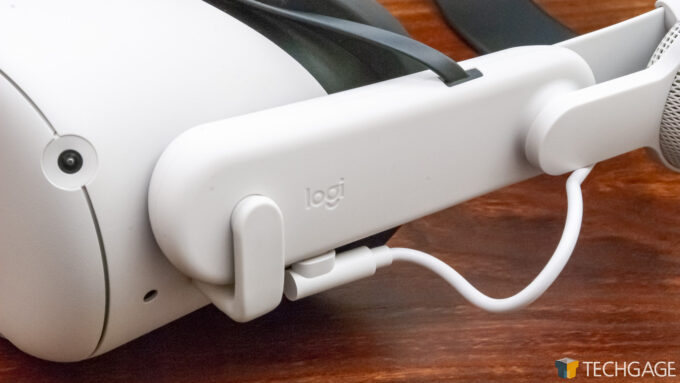 At $99 USD, this isn’t the most expensive Meta Quest 2 add-on I’ve seen. It does deliver great audio to improve immersion, but it’s not without its limitations as I mentioned above. If you don’t care for the wires and ear discomfort of ear buds, or the added weight and hot ears that headphones can offer, this is a really nice offering, but it doesn’t escape my review without the heavy asterisk of the aforementioned niggles.