Surround sound… done well and properly, it’s a treat to the ears. Done poorly, it’s an affront. Logitech’s new G430 promises to deliver 7.1 Dolby Headphone surround to satisfy your gaming and entertainment audio needs. How well does it come to hitting the mark? Read on and find out!

I confessed at the outset that I have a strong bias against surround sound headsets.

The G430 has come some way to change my thoughts about them. As I told Rob a couple of evenings ago, this is the first surround sound headset that I’ve ever had on my melon that I didn’t want to smash against the wall.

There’s plenty to like about the G430. First, I really love the ergonomically-conscious design. The cloth coverings on the ear cups are super-comfortable, for one thing. Cloth is a smart choice of material since it allows your ears to breathe and not accumulate perspiration as much as, say, leather would. The padding, which has an appropriate degree of firmness, also goes a long way towards ensuring a comfortable fit.

It’s a very light headset, which helps immensely in terms of user comfort. I’ve had headsets which were a bit too heavy, which limited the time they spent perched on my head. No such problems with the G430.

And the lightness isn’t an indication of a compromise on build quality. The ear pieces are quite solid, for one thing. I love the cable and the sleeving: It’s quite long and is very flexible, exhibiting no tendency for kinking whatsoever. 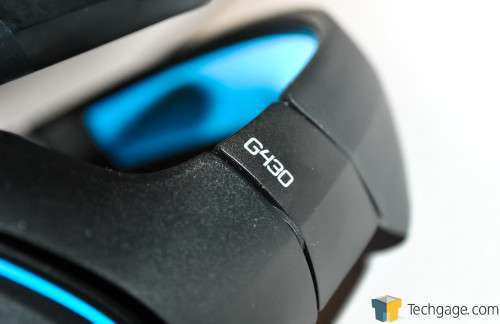 Returning to ergonomics, the G430’s metal headband adjusts superbly and ensures that the headset will fit almost any head size. I like how the headband doesn’t squeeze your head and ears too tightly, even out of the box. The foam padding on the inner surface of the headband is an additional aid to keeping the G430 on your head as well as making sure the fit is comfortable. Normal fore and aft head movements won’t dislodge it, although really violent headbanging probably would send these flying. I therefore would curtail the urge to emulate classic James Hetfield stage antics while wearing your G430.

Moving on, let’s talk about the G430’s performance as a headset. The microphone functions really well. I tested it out on Skype. My conversation partners heard me with perfect clarity. Adjusting the sensitivity levels in the LGS works superbly as well, with my conversation partners reporting progressive changes to volume of what they heard as I moved the mic sensitivity slider up and down.

In terms of sound quality, there are two sides to the G430. As a surround sound headset, it needs tweaks in the LGS to get the most out of it. This means spending time in the Advanced Equalizer section as well as the Surround Sound Mixer to eliminate the cold, synthetic, and somewhat unconvincing surround sound effect straight out of the box. You see, in the G430, the surround sound effects are created not by physical speakers but through software emulation. This is why you need to plug the headset into its USB dongle.

Fortunately, the LGS is so amazingly user-friendly that it’s fairly easy (if time-consuming, if you really care about getting the best possible sound quality – yeah, I’m one of those guys) to come up with an effective surround sound set-up. The Advanced Equalizer also does a fairly good job decreasing the coldness of the sound. To my ears, out of the box the mid-range seems to be a little lacking in substance and punch, and all sounds across the range sound a bit thin. If you love good sound, I’d say you have to spend time in the LGS to get anything close to what your ears are looking for. 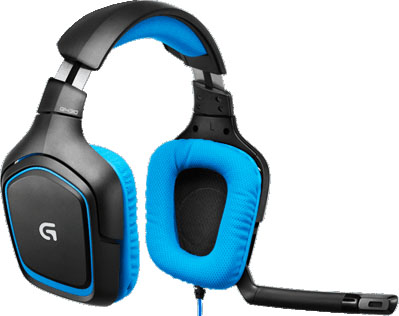 I tested the G430 without the USB dongle, plugging it directly into my ASUS Xonar Essence STX. This “relegates” the G430 to a stereo headset. I was astonished, actually, to hear the headset sounding so great. I used it on my iPod Classic as well, and again sound quality was fairly good. As a stereo headset, a lot of the punch and substance that were missing when it was plugged into the USB dongle were restored. It was actually pleasurable to listen to music with the G430 now, as well, with the coldness of the sound all but gone. I’m not saying it’s an audiophile’s set of cans now, but the G430 “naked” sure worked better for music.

I think this points out the biggest weakness in the G430 package (that is, the headset plus the USB sound card dongle): The dongle probably needs more raw amplification to drive the headset. I’m not an audiophile nor an audio engineer, but I do know that the Xonar Essence STX has a dedicated headset amplifier. Though the output is just stereo, the quality of the sound is far superior to what the USB sound card can muster, even after a ton of tweaks and testing. The iPod has a lower-powered headphone amp than the Xonar Essence STX, but it still drove the G430 in stereo a lot better than the sound card dongle could.

So what do we make of the G430? It’s got a lot more pluses than minuses in the grand scheme of things. Ergonomically, it’s nothing short of superb. No complaints whatsoever. It’s comfortable, and you can keep this on your ears for hours at a time very easily. The LGS is another strong positive: It’s a supremely capable piece of software that can tune G Series headsets as well as G Series mice. The user-friendly interface allows an end user to fine-tune the G430’s sound output with enough granularity to get close to what you perceive is the perfect sound. The noise-canceling microphone is also a boon, handling its task with aplomb and perfect clarity. Even in terms of aesthetics, I really like the black-and-bright blue color scheme, as well as the headset’s clean, modern looks. It’s priced quite fairly, too: Logitech has set its SRP at $79.99. 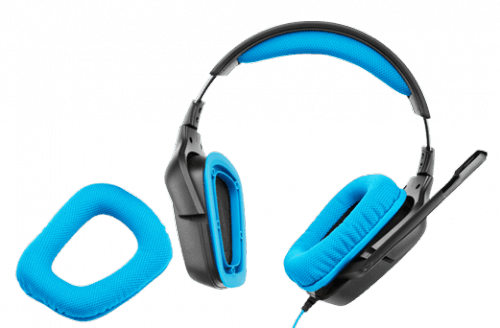 Indeed, my only real complaint about the G430 is the apparent inadequate power delivery of the USB sound card dongle. While it is the essential part of the G430 package insofar as generating that Dolby Surround Sound experience, it trips up when it comes to driving the headset unit itself. Out of the box, the sound quality is harsh and cold and lacking in power, even in the mid-range frequencies. It takes some work to dial in some quality into the sound output as well as the surround sound effects.

It’s highly unlikely that the target market for this product would care so much about sound quality. Gamers, by and large, would probably care most about the surround sound feature. In this reviewer’s opinion, though, even the surround sound performance out of the box needed tweaks in order to get a satisfactory set-up. I can’t speak for other users, but perhaps I expected more from the G430 than what it actually does deliver straight out of the box.

Then again, I can only speak for my own experience and perceptions. Other end users may not have any issues with the G430.

Fortunately, the LGS makes it easy to work on the sound quality’s shortcomings. You won’t get a perfectly satisfying result, but you can come close.

And that’s what the Logitech G430 does, ultimately. It’s not perfect, but it can come close, if you put the work and the time in to do so.

The Logitech G430 is available for purchase from Amazon.