The UE Boom from Logitech boasts an impressively hip advertising campaign and a promise to make music more “social” again. But past all of the buzzwords and pretty packaging, is this cylindrical speaker worth all of the hype? We take a close look… and can’t help but be blown away.

Page 2 – So Social: It’s the Life of the Party & Final Thoughts

The tagline for the Boom encourages you to “Rage, riot, party and play the music you love out loud.”  For the love of… dear Lord, who wrote this stuff?!    I hope the boys at Logitech are reading this review, because this is a business person you’re talking to and… f%[email protected], it’s probably perfect for a target market of way-too-cool college-age prepsters.  That being said, those of us who know the ruse of marketing and/or are coolness-challenged are not amused.  Actually, we are highly amused, and mostly at other peoples’ expense… but, still!

With all of the Boom’s marketing cruft towards “social” music, normal people might get the wrong impression – the Boom does not tweet, Facebook, text, or even email.  All it does is connect wirelessly (seamlessly with Bluetooth and NFC) and make noise pretty much anywhere you are, allowing you to take the party with you wherever you are (Dear Logitech:  if you would prefer to use that tag line instead of one involving “rage” and “riot,” please contact me).  By being able to very easily take your music places, it creates a more social experience – as does one other very nice feature of the Boom:  two-device pairing. 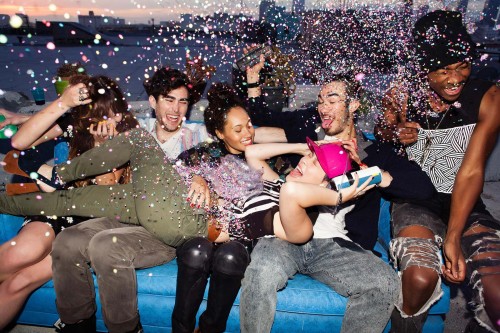 Thanks to someone very smart at UE, your personal crappy music collection doesn’t have to be the only music that plays at the party.  The Boom supports pairing to two devices simultaneously, and can play music from each of them.  This makes it possible to play one of your songs and have a friend join in with one of his/hers.  Both songs will play simultaneously if you’re not careful (the first player should pause – finally, a use for that “play one track only” mode!)… but if you are paying attention, it’s totally possible to pull off some really cool cross-fade effects from one little speaker.  Since pairing a device is so easy, it’s even possible to share the music once the party has achieved the illustrious goal of “drunk and disorderly,” though managing your tunes seamlessly might be a little trickier at that point.

This feature on its own puts the Boom heads and shoulders above the rest –  if everyone will be forced to listen, it’s nice to finally have a speaker that encourages someone else to play along with the mix, without requiring some convoluted Apple iTunes web-based group-voted playlist!  It truly does take the device to a new level, and issues a real statement that whether you want to listen or want to participate, you’re invited.

It’d be nice if UE considered expanding this further with software (round-robin playlist by multiple pairings, anyone?  Bueller?!)… I think there is a goldmine here and a truly unique product niche.  I see a future part of the UE Boom application where the owner can see all the devices currently associated to the speaker and maybe even put them in an order (or refuse them to play) – and the Boom sends a message to each phone prior to its turn to queue up a song on “one track” mode, and then “pulls” (by sending a Bluetooth ‘play’ command) that track when ready.   Hitting up five or six different people who all want to volunteer to play a LITTLE bit of DJ at the party is easy (a lot easier than finding one who wants to volunteer for the job all night!) and encourages participation.

Honestly, my greatest fear for this would be that so few people EXPECT this of a speaker that Logitech gets the wrong message by its usage statistics from people not even thinking of the function.  After all, I had it for a week before I figured this out – and missed two great opportunities to use it!  I will be sure not to miss another.  It’s not even like it’s truly hidden in the documentation (though it shows a tablet and phone, implying two devices from the same owner) – it’s just not something people would think of, based on prior limitations on the system as a whole.

“I haven’t heard this much noise come out of a package so small in all of my life – and I have a two-year-old daughter.”

So, with all of this said (and all the marketing mocked and flamed) – is the UE Boom a good product for its price?  I can give an enthusiastic “yes!” to that, without hesitation.  If I did not have a wireless speaker and needed one, this would be worth the (somewhat painful) price of entry.  But more importantly, even if I already had a prior one, I would want this to replace it at my earliest convenience.  It is small, lightweight, and packed with features.  It is durable enough for all of its intended usages, including getting a little wet (note:  I did not submerge the device for any length of time to simulate being knocked in a pool) or being dropped.  And quite frankly, even if it never expanded beyond the “one other person” limitation, the multiple people on one speaker is just brilliant (Please, please, pleeeeeease consider improving this, UE!).

However, all of this wouldn’t add up to a fart in the wind if it couldn’t do well as a speaker, its sole purpose for existence.  In this, it excels – the quality is way better than one could possibly ever expect from a device like this, and is surprisingly worthy of the Ultimate Ears branding.  The UE Boom is a device that is designed to run well and run loud, and when you consider that it fits in an 8″x3″x3″ space, that’s amazing.  Even the Bluetooth is a bit over-amped (at 50 feet theoretical, but 25 feet verified), and the whole thing just keeps cranking for hours.  Seriously, I haven’t heard this much noise come out of a package so small in all of my life – and I have a two-year-old daughter.  What is most important here is that this wasn’t three hours of a lab test from me – I put it through a couple serious weekends of yard work, family and friends… it left quite an impression on us all. 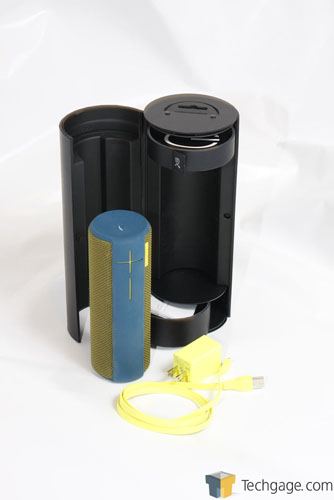 Don’t get me wrong, the Boom has its little quibbles – the lack of mobile volume control being a primary (and ridiculous) one; clearly a product of people who focus on their sound rather than their UI.  That being said, the worst I could say about any of its faults is to use the word “quibble” – I am genuinely scraping the barrel to come up with something I dislike aside from the overly-trendy marketing and the price.  As to the former, no amount of annoying, buzz-word dripping, socially glamorizing advertisements that Logitech uses to market the UE Boom will take away from the fact that this is a tremendously well-designed product…it will likely do just what it is intended, and bring in a different audience alongside serious audio-/techno-philes.  As to the price, well…I’m a firm believer that when the worst thing I can say is that it costs too much, it probably doesn’t.

… And when a non-audiophile can say THAT about a speaker, you know Logitech has a winner on its hands.

The Logitech UE Boom is available from Amazon and Newegg.