If keeping your backside planted on the couch is of the utmost importance, the Logitech K400 Plus keyboard might just be your new best friend. Whether you’re just getting into the HTPC or set top box game, or are looking to upgrade your current method of control, this compact multi-media keyboard is worth checking out.

For today’s review we move out of the lab and into something a little more comfortable. *suggestive wink* No, not lacey, frilly unmentionables. I mean the living room as we get ready to test out Logitech’s latest compact multimedia keyboard, the K400 Plus.

All too often we’re left without a reliable (and logical) way to control our media devices from the comfort of our couches, and the K400 Plus aims to help with this while simplifying the overall user experience. It can be used with Windows 7 or later, including Windows 10, Android 5.0 or later, and Chrome OS. With a range of 10 meters, or 33 feet, and the fact that it doesn’t require line of sight with the radio frequency (RF) receiver, most users should be ready to roll in minutes. 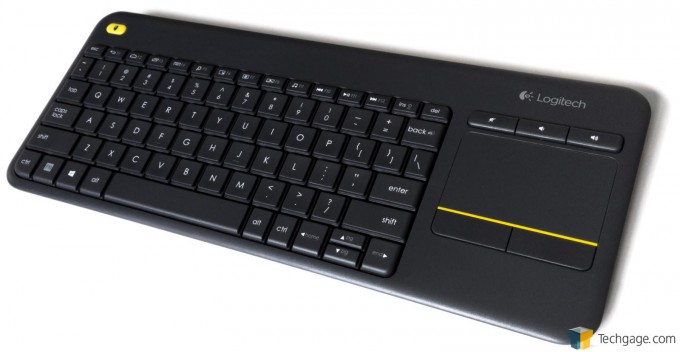 There are a lot of really useful features packed into the very living room friendly size of the K400 Plus. For starters, the generous trackpad features left and right mouse buttons along the bottom, and buttons to increase, decrease, or mute the volume along the top. The trackpad also allows for gestures, which can be edited via the Logitech Options software that we’ll look at shortly. 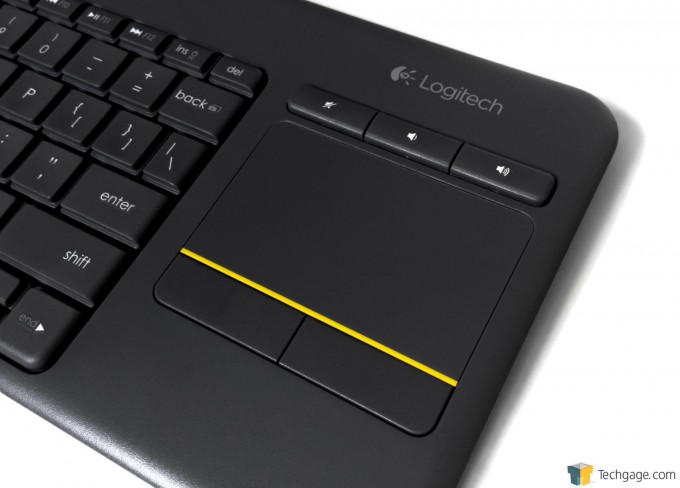 Shifting over to the opposite end finds the FN key that serves to engage the secondary function of various keys.  Also, to help make browsing as easy as possible, there’s an additional yellow left click button in the top left corner that allows the keyboard to be used more like an over-sized controller. 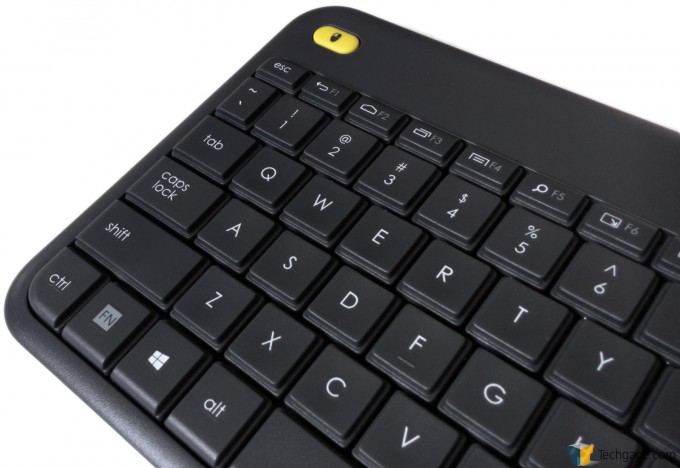 It should be said that the K400 Plus is geared toward multimedia in the first place, therefore many keys have the shortcuts configured as the primary function.  Using the FN key causes them to act like a typical desktop keyboard, but the default function can be changed via the software. Some of the more commonly used shortcuts are opening and navigating through the default Web browser, switching windows, opening the right-click menu, taking screenshots, or even putting the system to sleep, as well as the usual previous, play/pause, and next keys. 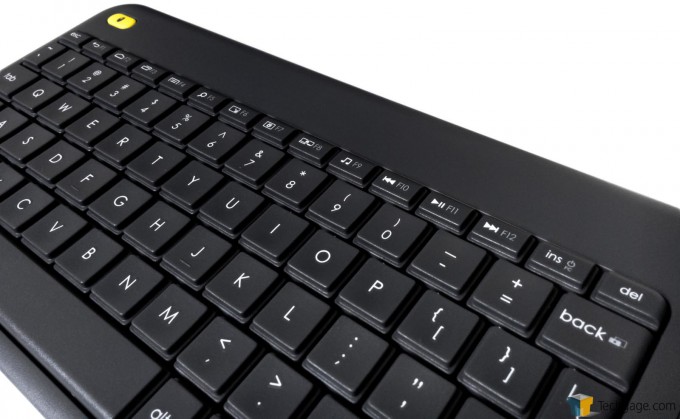 The back of the keyboard has four rubber pads to protect whatever surface it’s placed on, and a raised area toward the front that accommodates the two included AA batteries, and USB receiver storage compartment. Battery life is advertised at 18 months based on 2 hours of typing per day, but this can be pushed even further by using the on/off button found along the front edge rather than waiting for the shutoff timer. 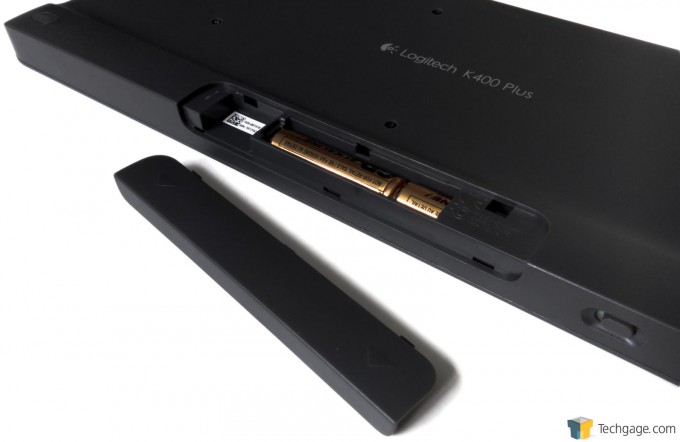 Included with the K400 Plus is a very tiny unifying USB receiver that can also be used to consolidate multiple supported Logitech devices. There’s also a quick start guide, and the standard safety and warranty information sheet. 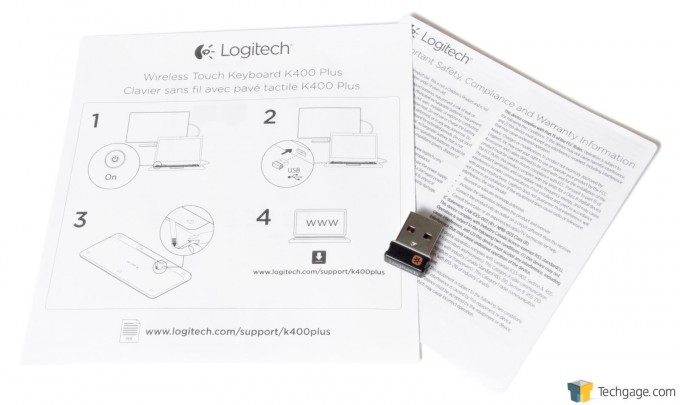 In case you’re not familiar with just how small Logitech’s receivers are, here it is next to a quarter. The receiver could easily be misplaced due to its small size, which is why being able to store it inside the keyboard when not in use will likely become a welcome feature. 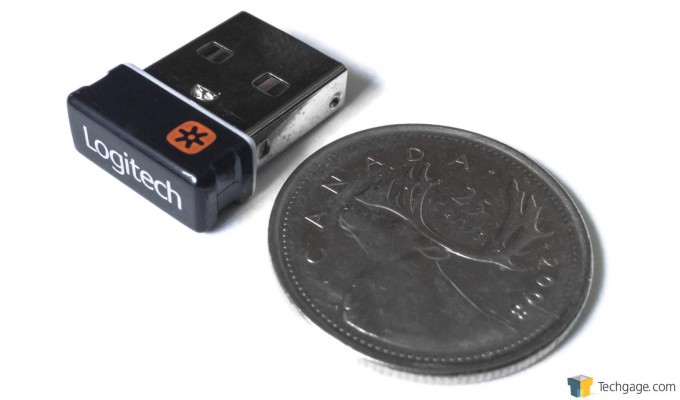 As mentioned earlier, the Logitech Options software is available for those who want to customize the functionality of the K400 Plus, although it will work fine without it. Once downloaded, users can do everything from setup custom key assignments and return the F-keys to their usual functions, in turn making the multi-media shortcuts secondary… 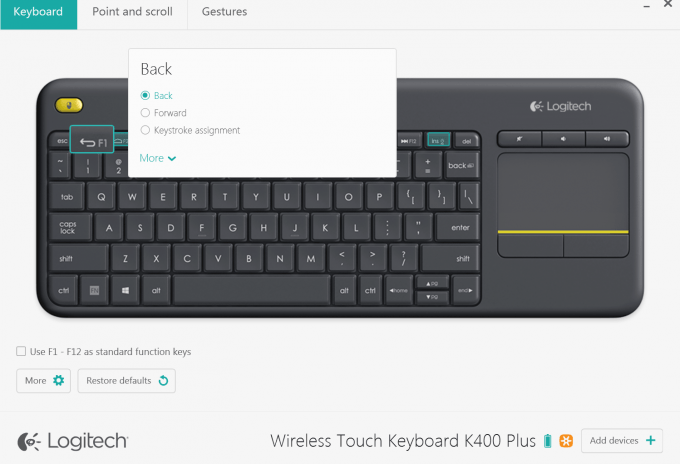 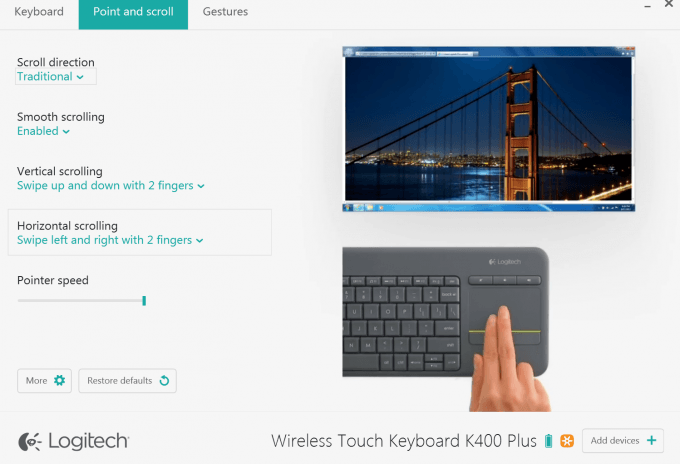 …to how the three available gestures will behave. There’s also the option to check for software updates through the More menu, and add additional supported Logitech devices. 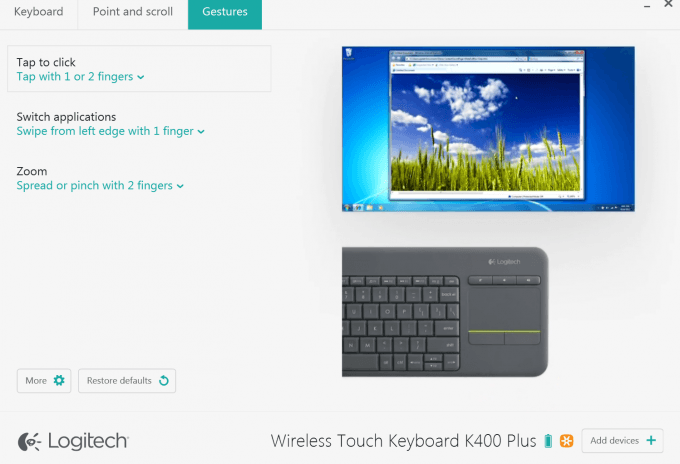 To test the K400 Plus we decided to fire up the ol’ HTPC to see how well we could navigate through Windows, then watch a movie using Windows Media Player, as well as a 3rd party media application, before finishing things off with some light Web browsing. It’s a tough job, but someone has to do it.

Before we get to that though, we thought we’d cover our “lab” setup. Your mileage may vary depending on whether there are other devices that could cause interference, as well as the room layout, but for us it’s a straight shot of 11 feet from the couch to the HTPC with no other RF controlled devices. Speaking of RF, the K400 Plus doesn’t require line of sight to the receiver, which means we were able to tuck it behind the flip down aluminum front cover and also use the rear I/O without affecting performance.

So, on to the actual testing. The main keys that I personally use the most are F2 to fire up the Web browser, F3 to switch between windows, F10, 11, and 12 to go back, play/pause, and skip forward, and FN+insert to put the system to sleep. With that said, I did try out the rest and they all functioned perfectly within Windows and when using Windows Media Player. While using a 3rd party media player we didn’t notice any issues with the shortcut keys either, however some of the diagrams on the keys are hard to interpret and it may take some time to remember each function. 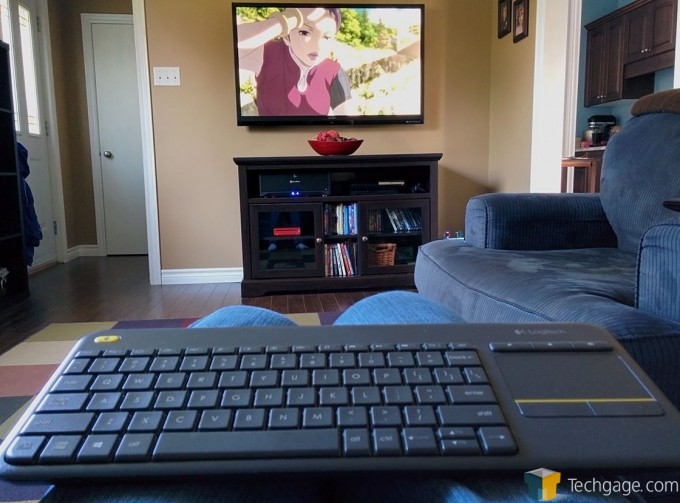 While browsing, the trackpad was fairly responsive out of the box, but we found that a quick tweak was needed to turn up the pointer sensitivity in order to be able to move from one side to the other on our 1080p display with a single motion. All gestures were received accurately, even when we purposely tried to do them just a little bit off such as tapping the second finger a hair later in order to simulate a right-click.

Overall the keys felt solid while offering a small amount of resistance, but didn’t feel spongy either, and they seemed to have a shorter than normal travel compared to other membrane keyboards that we’ve tested in the past. They allowed for quick, accurate typing, and remained quiet, even under heavy fingers. The lack of back lighting might throw some people off, but it should be a non-issue given the low price point of the keyboard, and besides, your mom was right; watching TV in the dark will hurt your eyes.

When left idle, the K400 Plus will go into a power saver mode of sorts, and is very quick to spring into action again when a key is pressed or a motion is made on the trackpad. While it’s a little hard to measure something like this, it was no more than half of a second before the pointer began to move after being woken up.

After wrapping up testing we found that controlling the HTPC is now a treat rather than a chore when compared to the frustrating experiences of using a generic, remote-sized micro keyboard. At first, Mrs. Optix thought that having a keyboard in the living room would be strange due to its larger size, but its easy operation and useful features meant that she adjusted quickly. If you’re used to gaming keyboards with extra banks of keys for macros and such, the K400 Plus really won’t seem that large anyway.

The initial “new keyboard” adjustment period only last a few days and I found that navigating is even faster thanks to the extra yellow left click key. My right hand is free to quickly move around and make gestures on the trackpad without having to drop my thumb to the mouse buttons located below. That may sound silly to some, but once you try it I think you’ll agree. 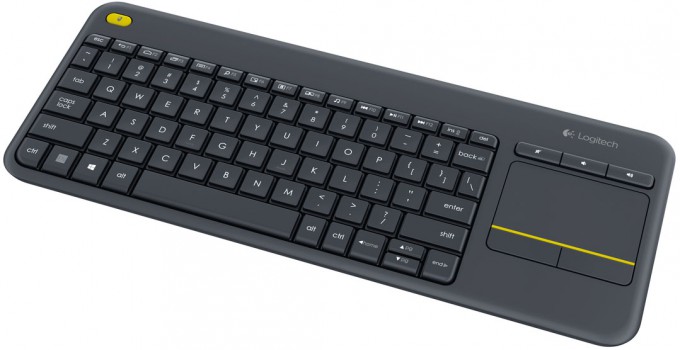 The K400 Plus is light, yet solidly built with little to none of the plastic creaking noise that I find common with lower-priced keyboards today. The keys feel great under the fingers, remain quiet while typing, and respond quickly, as does the keyboard when woken up. The shortcuts are located in logical positions and are very easy to fire off thanks to the fact that they are set as the primary function out of the box.

Logitech has a winner on its hands with the K400 Plus, and for those who like to keep a close eye on their wallet as I do, the super low price tag of $40 USD for a full-featured and easy-to-use keyboard such as this will surely make the misers happy.

The fact that the K400 Plus is so good makes the standard K400 seem almost obsolete. They occupy the same price point, so it wouldn’t surprise us if the older model fades away.