Looking for a comfortable keyboard, but don’t want to go the way of the ergo? Logitech’s latest Wave keyboard is catering to you. The keys are laid out in a “Wave” pattern to contour to your hands and a palm-rest is added for additional comfort. Have Logitech come up with a winner?

Installation is as simple as they come. Plug in the receiver to the computer and then wait for the keyboard and mouse to ‘click-in’. That took only a minute, and I was ready to go. For advanced functionality though, you need to install the SetPoint software, which allows you to adjust the functionality of some buttons if you don’t like some of the default actions. The SetPoint software is available for both Windows and Mac, although Linux users are left in the dark, again. The keyboard and mouse will function fine in Linux, although the special-function buttons won’t work without some Xorg configuration. 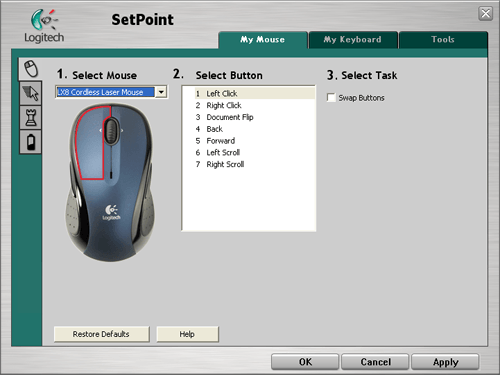 If you have used a Logitech product in the past few years, the SetPoint software should be quite familiar to you. Between each new product launch, not much changes here, unless the product has some sort of exclusive functionality. As far as the mouse goes, the only action I changed was what occurs when the scroll button is clicked. The default action will bring up the application switcher, so I changed to “Default Action” which allows me to click a link in Firefox and have it open in a new tab. This of course is a personal preference, and yours may vary.

The keyboard configuration will be important to most people, if you don’t like some of the default options. The application switcher is one app in particular I have never grown a close attachment to, so I tend to change that to a shortcut that automatically loads up Techgage.com, which I recommend for anyone. 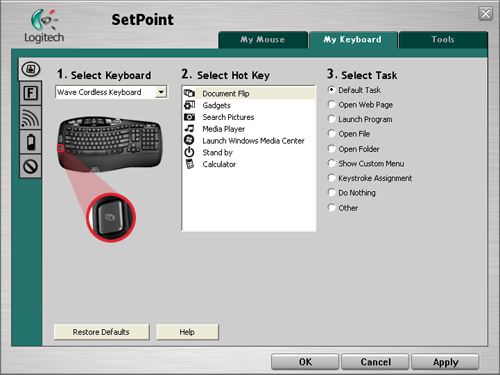 You can use the Fn key, which sits in between the right ALT and CTRL, along with an F1 – F12 button to perform an alternative action, such as loading Microsoft Word or your web browser. These can all be customized to your liking. The last important step you can take is securing your keyboard to your computer, so that it will not be picked up by other PCs in the house. I once made the mistake of not securing the keyboard, and hilarity ensued.

As I mentioned in the intro, I am not a fan of ergo keyboards… at all. I see their purpose, but I personally cannot get used to them. So, as far as ‘pure comfort’ goes, that leaves me in the dark. After using Logitech’s Wave for the past few days, I can honestly say I am impressed overall. Is it more comfortable than a normal keyboard? As far as personal preference goes, I definitely find it more natural to use, which is what Logitech was going for.

Whether or not this is going to prove better for you health-wise, I’m not sure, but I can personally say that I’ve enjoyed using this keyboard more so than the standard Logitech keyboard I have been using for quite some time. Once the Wave hits retail, I plan on picking up a wireless version for my main PC and a wired for my spare PC, so that might speak for itself.

Like all keyboards that are ‘different’, this one will take a little getting used to, but it took me all of five minutes. Even though the keys are in a wave pattern, I didn’t accidentally hit the wrong key often, so despite it being different, it shouldn’t take that long to get used to. The most difficult part will be remembering where all the media keys are, but chances are you will not refer to them that often, and when you do, you can just lower your head and look for it. 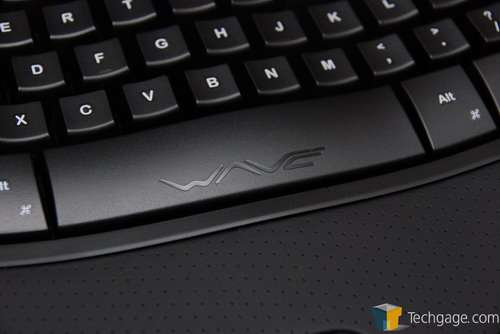 Overall, I am impressed. It’s not a revolutionary product, but it’s a nice upgrade to what we’ve been using for quite a while. It’s definitely an improvement over standard Logitech desktop keyboards. Though, it may still not be for everyone, so it’s best to hit up a B&M store if you can, when they go on sale, to test out it’s feel. I am confident in saying that most who give the keyboard a chance, will want to stick with it.

The mouse on the other hand, didn’t do too much for me, but that’s no surprise since it’s ambidextrous. I have never really enjoyed an ambidextrous mouse, so I wasn’t expecting to like this one. It proved very responsive, however and worked well. It only has one thumb button though, so that might be a downside for some of you.

I am awarding the Wave Cordless Desktop an 8 out of 10 alongside an Editor’s Choice. Despite the fact that I don’t enjoy the mouse that much. Those who enjoy ambidextrous mice, however, shouldn’t have a problem with it at all. If you don’t mind being wired, however, I highly recommend picking up that version of the keyboard and sticking to a mouse you are more comfortable with while also saving money. Both the wired and wireless versions of the Wave are due out this October.