by William Kelley on September 16, 2008 in Peripherals

If you are a regular player of racing games on the Playstation 3, then you owe it to yourself to consider an upgrade to that inefficient gamepad! Logitech’s Driving Force GT was designed for Gran Turismo 5, but works well with most other racers out there, and after we put many hours of driving into it, we can happily walk away impressed.

After mounting it to the nearest coffee table and cueing up GT 5, I was ready to put the Force GT to the test. In-game, it was recognized immediately and I was able to quickly set up my profile to take full advantage of all the features we’re given. I initially ran with the default settings just to get my feet wet. Steering feel was excellent and the level of control I was able to obtain after a few short moments quickly caused my confidence levels to swell far higher than the hand-held controller could have ever hoped to.

Within five minutes I was driving deeper into the corners without a second thought. Braking was also something that was improved so much that I am failing to find the words to describe my feelings. My previous fastest lap times were no match for my newfound level of control.

Next was to start experimenting with some of the advanced features. I started by using the 900 degree turning option. While this was a novel idea and seemed like it would add realism, it pretty much forced me to turn the wheel too much to make high speed corners with much success. I have to admit I quickly disabled this feature.

The same goes for the “real-time adjustment” wheel. It’s a neat feature if you need to change many suspension and braking settings while running. I personally found it difficult to concentrate on my driving while scrolling through the menus. I should add that I feel this could be more useful once I was fully confident with my driving and had memorized the settings as well. 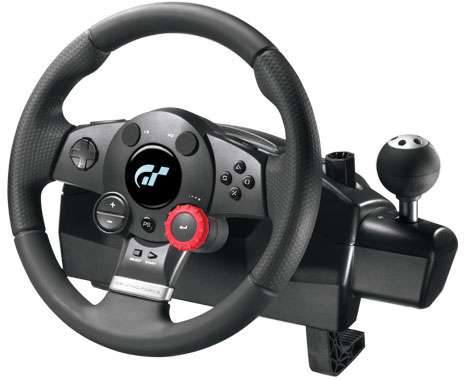 I found the force feedback to be quite strong and the wheel’s desire to return to center was excellent. Even when turned just a matter of a few degrees, the feedback was immediate and made the realism levels skyrocket. Bumping the curbs or going off-road caused instant feedback. I set the levels to maximum and giggled out loud when the wheel was nearly jerked out of my hands at times.

The main flaw has to be the mounting design. It was just not easy to get a good mount. Add to that the fact that the feet do not reach that far under the table. The first table I tried to use simply did not have enough meat after the edge causing the base to slip and slide when I started turning the wheel. While the next table I tried was sufficient, I was still able to eventually dislodge the base when doing major rapid steering angle changes. I found that a piece of non slip rubber between the base and the table worked wonders and is a simple fix that anyone can implement on their own.

The next glaring flaw is the paddle shifters. They are small and difficult to use properly when you are up to speed and making quick left-right-left style maneuvers. I again point to the large exposed paddles of the MOMO wheel and the absolute ease of use they give us. Since I prefer to keep both hands on the wheel while racing and shifting, this is something I just could not overlook.

All in all, Logitech has done it again by supplying us with a great budget controller that does the job and then some. I know I have already said this, but the difficulty in playing any racing simulation with a handheld controller drives most of us to find something else to race with. I feel confident giving an 8 out of 10 rating to the Driving Force GT.

If you are anything more than an occasional armchair test driver, owing this setup will instantly magnify your excitement by 10. I should also add that it worked well with Codemaster’s GRID and pretty much all other racing games as well for the Playstation 3 that I tested.