With the new revision of the G15 come new drivers, which we’ll look at now. For the most part the drivers haven’t changed much, but there’s at least one big surprise.

Let’s start with the new GamePanel manager, which controls applets running on the LCD. 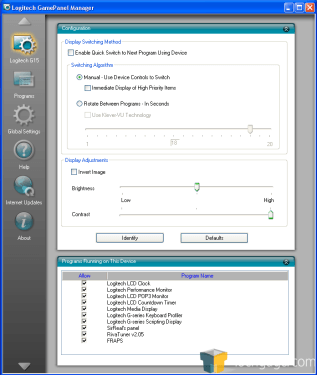 The main window allows control over the multiple LCD applets that are running and the brightness/contrast of the LCD. Starting at the top, quick switching simply means that as you change applets, the applet name is shown for a shorter period of time before the applet itself is displayed. Manual and rotation alter how the applets are cycled through. Inverting the LCD image changes the display to black on orange rather than orange on black, and the brightness/contrast can be adjusted. Finally, you can control what applets are permitted to run. Note that 3rd party applets can be allowed/disallowed here. 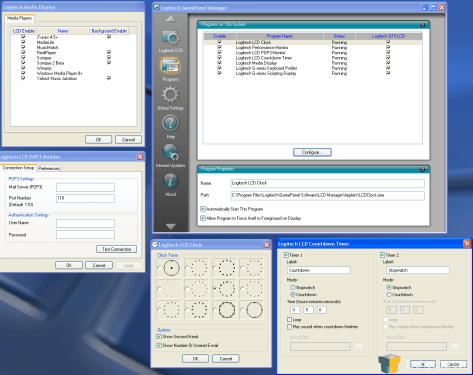 The program manager window allows control over some of the applets that are included with the G15 software. In the above image I have shown the four programs that can be configured here. Counterclockwise from the top left there is the media display applet, which can display information from a list of different media players on the LCD screen.

Next there is the POP3 monitor, used for keeping track of email – I couldn’t get this applet to work using XP Professional 64bit – it would throw an error and need to close every time I tried to start it, which was problematic because I couldn’t change servers to see if that was the problem. Reinstallation didn’t solve the problem. Next there is the clock, with several different styles to choose from, and finally you can configure the timer/stopwatch – yes, both can be run at the same time. 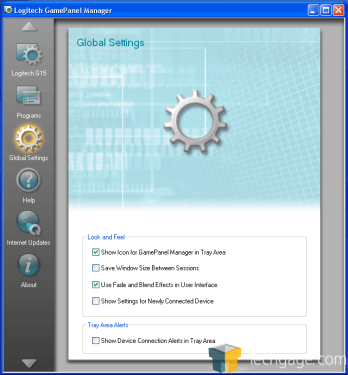 The global settings are pretty self-explanatory.

If you need help with anything, there’s a very extensive help file that can be accessed from the help section. 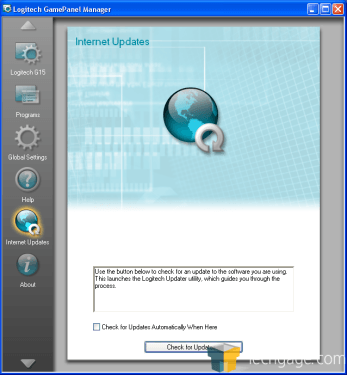 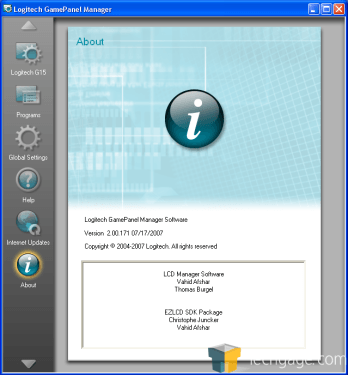 Finally, there is the version information. 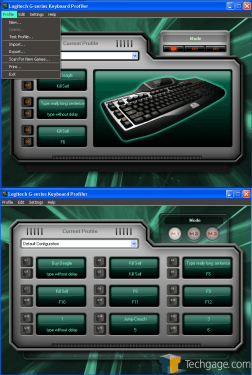 In the profile drop-down menu contains options pertaining to the creation and saving of profiles. One of the best things about the G15 is that users can save and share profiles, so any user can benefit from someone else’s work. 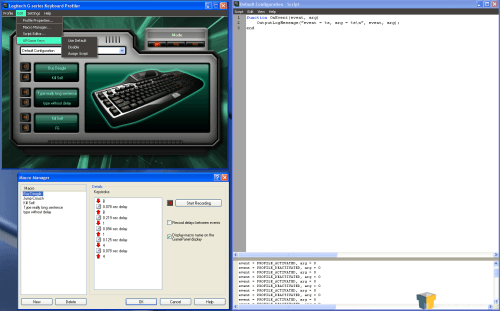 The edit menu allows for changing of all profile attributes, and is where the macro manager and script editor can be found.

The macro manager is a nice tool that allows users to create and save macros under a given profile that can then be assigned to the G-keys. This is nice because it means that once a macro is created and saved, you don’t have to perform the keystrokes again in order to assign it to a different G-key, you can just pick it from a list. Note that this only applies to one profile – if you use the same macro for several different profiles, the macro must be programmed for each one.

The script editor allows users to create and save their own scripts in the Lua scripting language. I know nothing about this language or how to go about writing scripts, but from everything I’ve read, this is going to be a very powerful and useful tool – and of course, scripts can be shared! 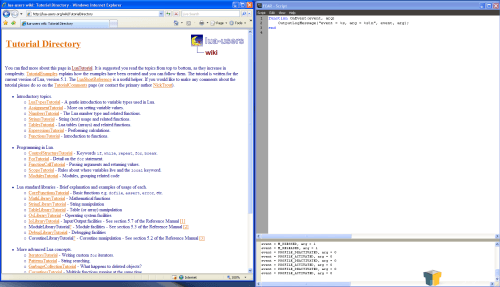 For those of you who are anxious to begin writing scripts for the rest of us to download later, the tutorial can be reached from the script editor help menu. A few clicks will get you to the Lua online reference and wiki page. 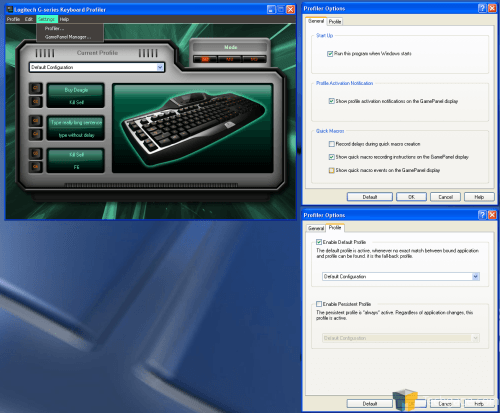 If that script-coding window scared you, the settings menu will be a welcome return to simplicity.

Again, the help file is very extensive and contains walkthrough instructions for everything you might want to do other than writing scripts. 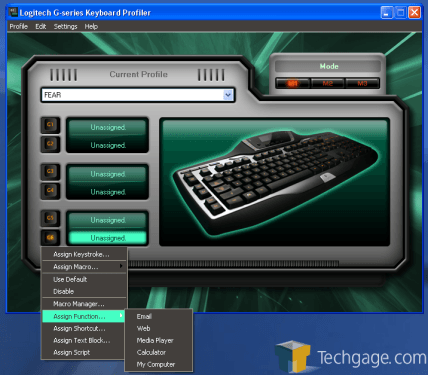 As for assigning functions to keys, there are quite a few options; keystrokes, macros, shortcuts of your choosing, and scripts can all be tied to each button. Assigning macros can also be performed while playing a game by using the quick macro key, (labeled ‘MR’) located near the Mode keys.

The beta software that is included with the revised G15 can be found here.

This software is compatible with both versions of the G15, and I was able to switch between my two G15’s without missing a beat. I could create profiles using 18 G-keys with the original G15 and also with 6 G-keys with the revised G15, and all of the Logitech LCD applets worked with both keyboards. It’s worth mentioning that importing a profile made for the original G15 into the revised G15 will result in G-keys 7-18 being dropped, but keys 1-6 still function properly. There doesn’t seem to be any problem with LCD applets either – RivaTuner and FRAPS both run perfectly on both keyboards, as do EGS3 and SirReal’s Panel, so it looks like Logitech did a good job ensuring that user won’t have any compatibility issues.