I spent quite a bit of time with this new G15, and I have to say that my impression is more positive than I expected. The key surfaces have the same feel of the original G15, but the tactile response feels smoother and is noticeably quieter, which many will appreciate.

The number of simultaneous key presses is between 6 and 8, according to testing done with PassMark KeyboardTest. I was able to press nearly any combination of WASD, Q, E, Shift, Ctrl, Space as well as the arrow keys without any problems. I’ll also note that I played through Half Life 2: Episode 1, Episode 2, Portal, and Dark Messiah of Might and Magic in their entirety solely with this keyboard, and experienced zero key press problems.

The LCD panel is easy to control, easy to see, and with the ability to design and download custom applications for it, it’s extremely versatile. Owners of the original G15 may be disappointed with the smaller size of the LCD, but the resolution hasn’t changed, so I actually found this new LCD easier to read in some cases.

The media keys all performed their functions without issue. Owners of the original G15 might miss the volume knob, which has been replaced by two volume buttons. Personally, I prefer the knob, but the new design looks great and works well. 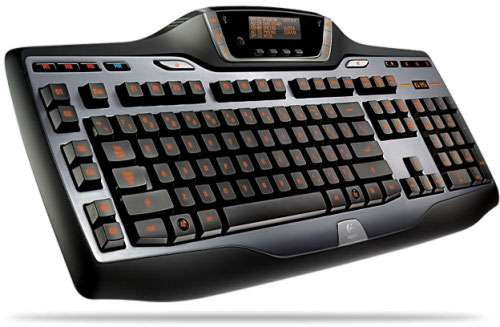 Whether or not you like the new orange color scheme, the lights are nice and bright, with a noticeable difference between the two brightness levels that you can choose from. Also notable is how well controlled the lights are – with the old G15, the backlighting was visible between the keys – with the new revision, the only light you see is coming through the markings on the keys; personal preference will dictate if this is a good thing.

With the exception of the POP3 notification applet, the drivers worked flawlessly and the G-keys were very easy to program and use. One thing that sets the G15 apart from it’s competition is that the programmable macros can be of any length – in fact, this entire paragraph was typed with one key press. This keyboard is a very powerful tool in any environment.

So, having said all that, let’s break it down.

So did Logitech’s changes make the keyboard better? That’s largely subjective, but even those who prefer the original G15 will appreciate the quieter, more buttery smooth keys, and the new driver software and Lua scripts can be enjoyed by all. There is no doubt that this keyboard is a force to be reckoned with.

For some modding-specific information, please check out the next page!