Page 4 – A note on Modifications and 3rd party applications

If you’re looking for a constantly updated place to find profiles, scripts and LCD applets, I recommend g15forums.com. This was my stomping ground back when I was swapping LEDs and downloading applications, and it’s still going strong today. If it’s G15 related and worth getting, it’s probably there.

Back with the first G15 was introduced, a nice disassembly guide was made, and some nice LED modifications were documented. I had planned on documenting a similar disassembly with this board, but stopped fairly early on. I’ll explain. 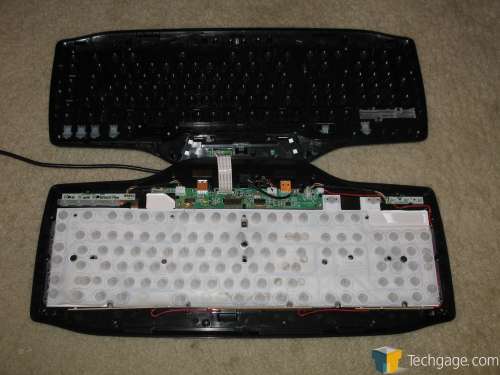 Opening the board up is as simple as undoing the screws from the back (none are hidden, and they’re all the same length) and applying a little pressure to separate the pieces. From here, it doesn’t look like it’d be difficult to get rest of the board apart. 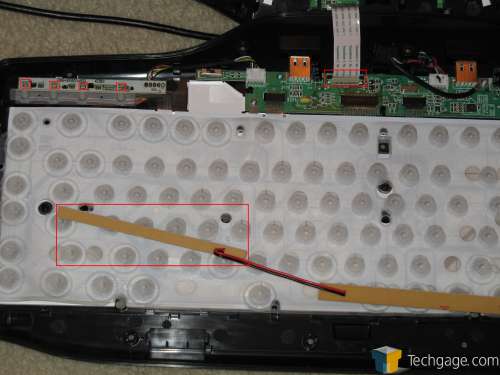 Here you can see that the LEDs on this board are surface mount, so replacing them is going to be very tricky. The 4 boxes in the upper left show the LEDs for the M1-M3 and MR keys, and give you an idea of how small these LEDs are. The large box in the center is showing the reverse side of one of the LED PCBs for the main keyboard, and shows that there are no solder connections that go all the way through the PCB. The small-ish box on the top right shows the LCD connection cable, which can be detached by pulling up on the black tabs on either side of the cable plug (visible here) and then pulling out the cable.

Unfortunately, replacing these LEDs is going to be significantly more difficult than with the original G15 due to the size of the LEDs and the surface mount soldering methods used to attach them. No doubt someone more resourceful/patient that myself will undertake this task. Good luck!