With gamers so content with current keyboards, companies such as Logitech are trying to introduce the most feature-robust and unique models to the market, and they’ve pulled it off with their G19. Featuring a bright top-mounted LCD and a slew of gamer-specific options, the only potential roadblock is the high price.

The never-ending quest for the ultimate gaming gear has fueled the peripheral war for decades. Established in 1981, Logitech has been a pioneer on many fronts of this battle. From the humble mouse to massively powerful speaker systems, their product range has not left us lacking.

Gaming keyboards are big business and the release of the G15 V1 model in 2005 changed the way we looked at this overlooked device. We were given a nice little display that proved to be quite useful whether gaming or just surfing the web. The SDK was free and open-source, which allowed many custom applications to take advantage of it. A revised version, aptly called the G15 V2, was released in 2007 and addressed the size issue of the original.

2009 brought us the next evolution of the G series keyboard, the G19. Packing an LCD screen, user adjustable back-lighting and powered USB 2.0 ports amongst other features, the G19 was designed to surpass its older brothers. With a price tag of $199.99 US, there seems to be some big shoes to fill. Let’s take a closer look and see just how well it meets our expectations.

Out of the box and onto our desk, we get our first glimpse of the G19. The overall width is just over 19″, so it should keep within the keyboard tray on nearly all desks. This time around, we’re given two rows of programmable macro keys, as well as multi-media controls. The USB cable that goes to the tower also has an A/C power line that supplies the LCD with whatever juice it needs. 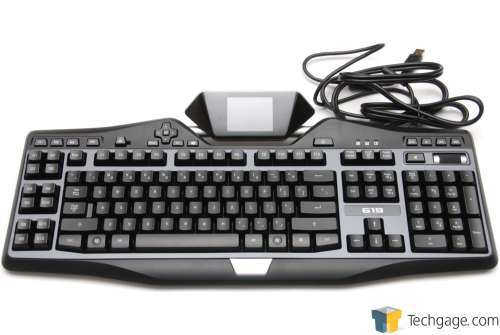 For most gamers, the keys themselves are going to be the perfect size and height. They have an excellent feel, and also resistance, and the spacebar isn’t fussy with regards to where you hit it. The typical QWERTY keyboard layout is maintained here, so shortly after hopping on the G19, you’ll be a pro at using it. 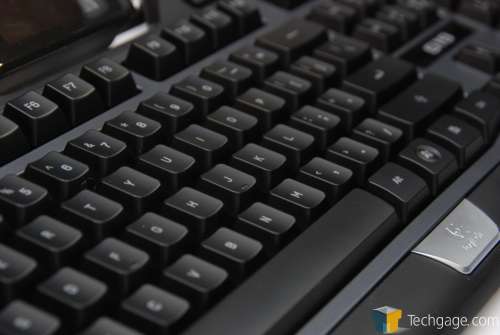 Above the backlit G19 logo, we see the usual suspects. LEDs for the Caps Lock, Scroll Lock and also the Num Lock are found at the top of the board, and are easy to notice if you need to check the status quickly. 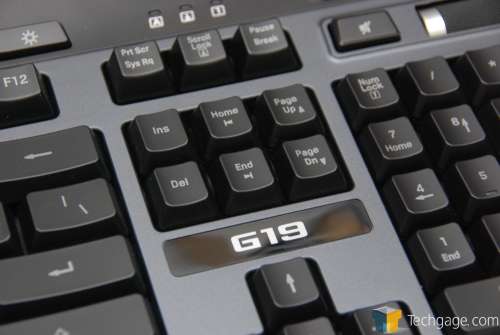 The media function keys are found in the upper right corner. The volume control is now barrel-shaped and rolls with the flick of the finger. It is not overly sensitive and does take a few flicks to get things moving. While some would rather it be more sensitive, it felt just right to me. The media keys work with most current media applications with no extra programming or tweaking needed. 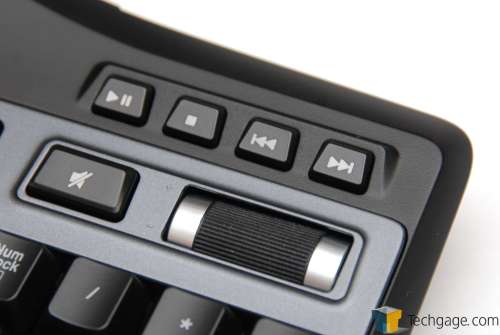 To the direct left of the LCD screen, its controls can be found. Logitech has chosen to keep things simple here and as you’d expect, they’re all easy to access and push. Within 5 minutes, I was right at home with them and able to effortlessly scroll through all of the available choices. Note that the sliding key to the upper left de-activates the “Windows” key. Anyone that has accidentally hit that key while in the middle of an intense gaming session will surely appreciate the inclusion. 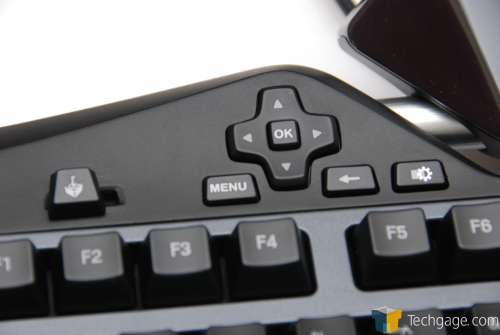 A familiar sight on the left side of the board are the macro keys. The first revision of the G15 included three rows, while the second dropped it to just one. The G19 has settled right in the middle with two, but because you can switch between three complete macro setups (with the M1 – M3 buttons), you essentially have 36 macro buttons at your perusal.

Also, you can program the LEDs to change colors with each set of presets, so that you can easily distinguish which one you’ve chosen. 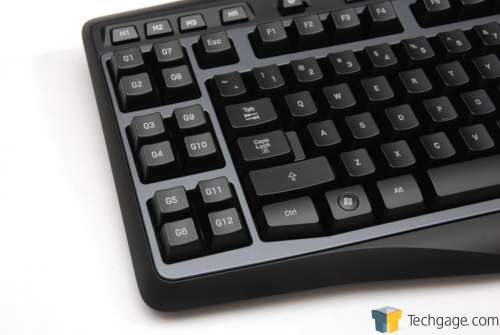 The LCD screen is mounted on a bar that allows for easy pivoting for the perfect view. At its stock position, the view angle is kind of limited, so it’s nice to see that the issue was remedied in this manner, as it’s simple, yet effective. 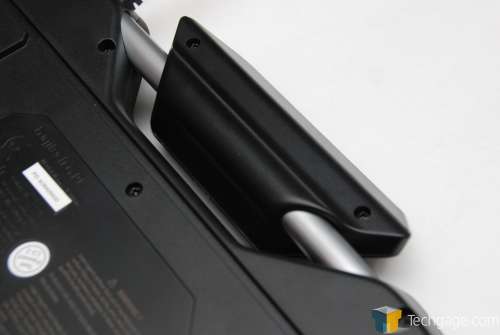 The backside of the G19 is somewhat uneventful. There are rubber feet at the bottom to prevent it from sliding around, and adjustable feet towards the top to angle the board for those that prefer it. 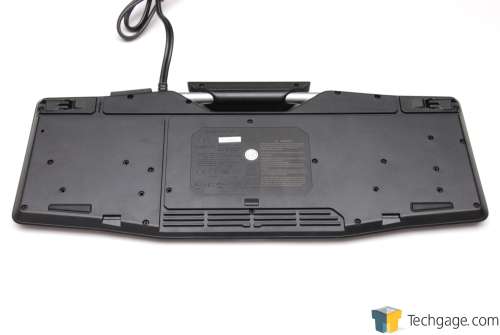 For added comfort, we are given a simple but effective removable wrist rest. Little effort is required to install or remove it, but like most wrist rests, you’ll want to take care in not accidentally snapping the plastic tabs, especially when removing. This feature is either love it or hate it, and I personally can’t bear to use one on any keyboard, but it’s still a nice option for those that prefer it. 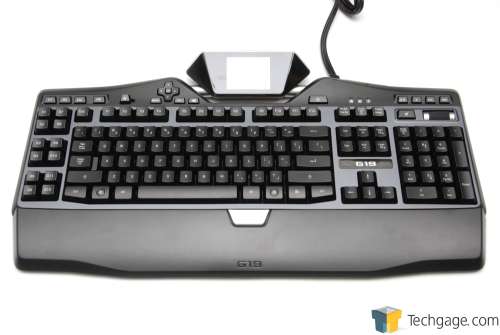 The G19 is one expensive keyboard, but what it does get you is a very bright, clear and easy-to-read LCD screen. The colors are great and the overall functionality is thoroughly enjoyable. What we’re given is a 320×240 resolution, which, believe it or not, can even handle some streaming video. This is a great upgrade from the G15’s monochrome display. 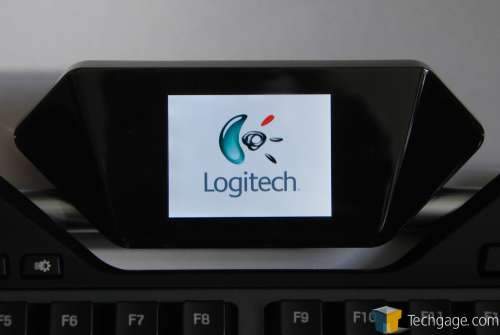 With the tour of the board out of the way, let’s get right into the software installation and set-up, and finish things off with some final comments.