It’s been quite a while since I last took a look at Logitech’s gaming software, and I must say, it’s come a long way in terms of functionality and refinement. As has become a theme with gaming peripherals nowadays, the G300 didn’t include the software in the box. Instead, it’s up to you to go to Logitech’s support site and grab it there.

Before even tackling functionality, though, I have to say that Logitech has done an outstanding job with the aesthetics for it software. This, quite simply, looks amazing. When so many companies produce peripheral software that tries way too had to be cool, it’s nice to see a clean, classy interface like we see here.

At the initial screen, you can choose to begin tweaking, or in the event you want to use macros, you’ll need to click on the icons to the top-right of the G300 image. This changes the profiles being used from the mouse itself to the PC. The G300 has no on-board memory, or at least a lack of it, so anything more than the three simple profiles cannot be used in its default setting. 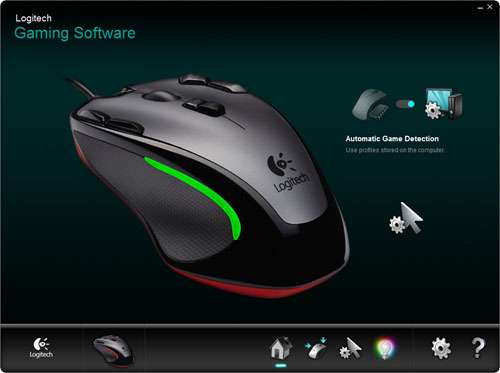 The G300 is able to store up to 5 levels of DPI, or as few as 1. Support of 200 – 2500 DPI is supported which should be enough for most gamers. Need more? This is not the mouse for you. At the DPI screen, you can also change your polling rate and adjust other minor details. 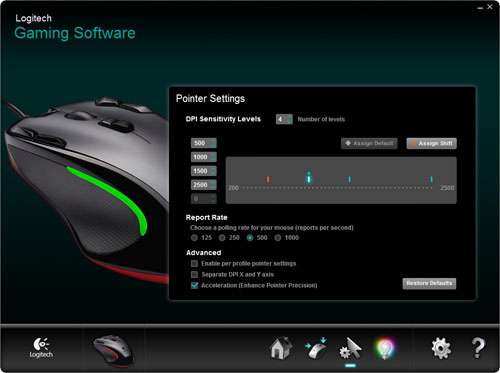 On the button setup screen, you’ll see a simple graphic of the mouse with all of the various functions floating above their respective button. These can be double-clicked to change their functionality – which as mentioned on the front page can represent a keyboard button, keyboard shortcut, or a macro. 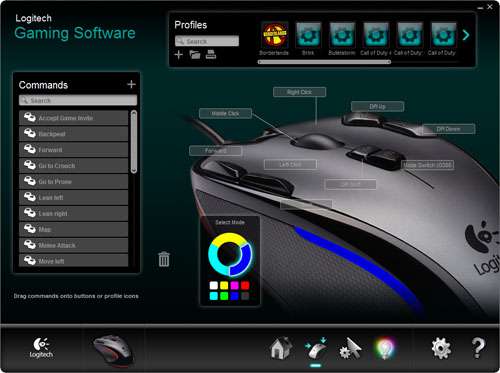 At the left in the above screenshot, you’ll find a list of pre-defined commands based on the game profile you’re currently selected on. These can be clicked and dragged to any one of the mouse’s buttons for the sake of ease – and in the event that your game is natively supported, this would be a good idea.

If those commands are not that useful, you can define your own. In the ‘Command Editor’, you have a wide-range of different options, from a single keystroke to blocks of text. There’s even an option for Ventrilo commands! 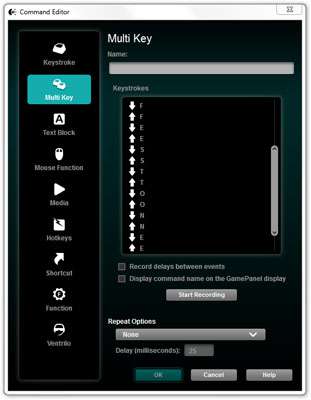 The G300 might be a gaming mouse, but the flexibility seen in the above screenshot makes it a mouse perfect for FPS, MMO or any other genre, or even general office work. Have to push the same keys all the time for some reason? Set it up as a macro. In one example, I set the Image Size option in Photoshop to one of the buttons so that I didn’t have to type in ‘Ctrl + Alt + I’ each time I needed it. Rinse and repeat for the ‘Trim’ command.

Overall, more keyboard shortcut / macro functionality than you can shake a stick at. Not bad for a $40 mouse.