The Logitech G51 speaker system comes in a heavy cardboard carton that’s arrayed with vivid, attractive graphics and other meaningful information. Let me reiterate – this box is heavy. As I’ve explained in the past, however, that’s a good thing, particularly when it comes to speakers. 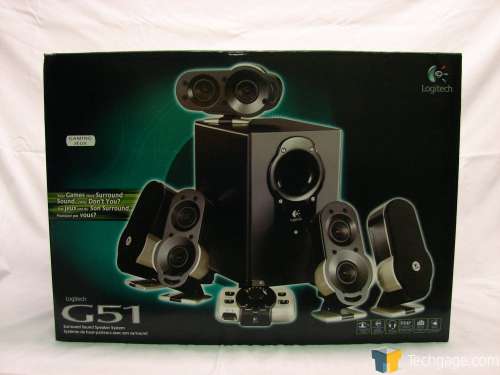 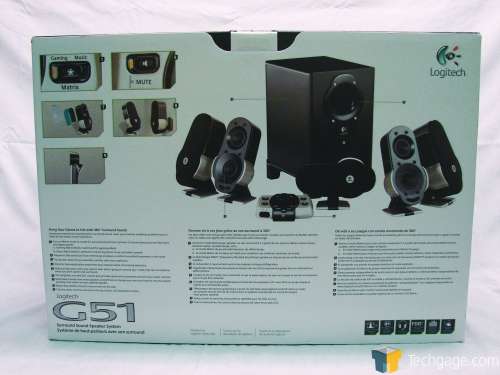 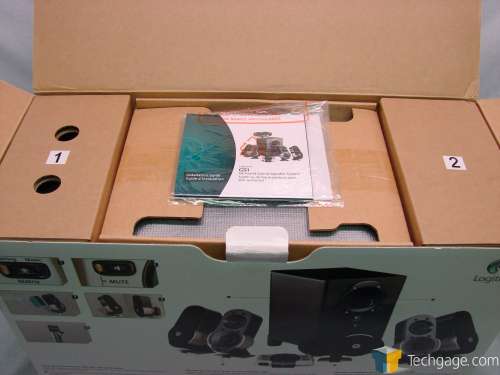 Open up the box lid, and you’re faced with three more cardboard boxes. You could remove them in any order, but only one order will provide the most trouble-free unpacking experienceâ€¦thankfully, Logitech has removed the enigma from the procedure by helpfully numbering the modules. The subwoofer’s power cable is hardwired to the subwoofer, and has been folded up and tucked away in module ‘2’, so any attempt to remove the second module first is an exercise in futility, or else lots of mangled cardboard. Rememberâ€¦module 1 first. 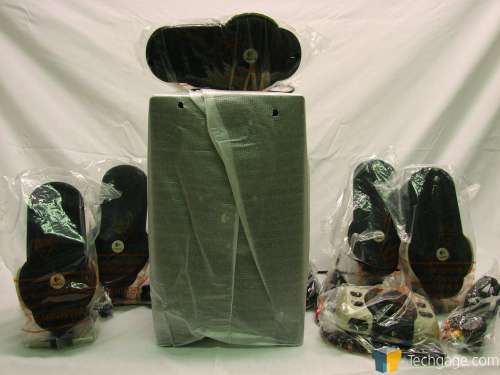 Once you’ve solved the puzzle of how to get everything out of the box (or just decided to turn the whole ever-lovin’ affair upside down on the floor), here’s what you’re left with: the hefty G51 subwoofer, four matching front and surround satellites, the horizontally-oriented center channel satellite, a wired control pod, and a ‘ribbon’ cable with all the individual signal input wires bonded together, a thoughtful feature that helps avoid a rat’s nest.

And now, a word about cable lengths. A common Achilles’ Heel of many multichannel PC speaker systems is that they often don’t supply enough wire to reach the desired rear speaker locations that you lovingly selected. Wire is copper, and copper costs money, so manufacturers have a reason to skimp as much as possible on the wiring to the rear surround speakers.

That isn’t much help for those who want to place their rear surround speakers six feet or more behind them, and still have enough slack left to route the cables in an aesthetically-appealing way instead of duct-taping them to the carpet. Thankfully, Logitech hasn’t left us out in the cold here – each rear satellite has about 15 feet of cable, which was enough to place the satellites six feet behind me on either side with some cable left over for me to do a pretty job of routing the cables.

Next, let’s take an in-depth look at the G51 system’s gamer-friendly features